In the U.S. they are never called human rights violations 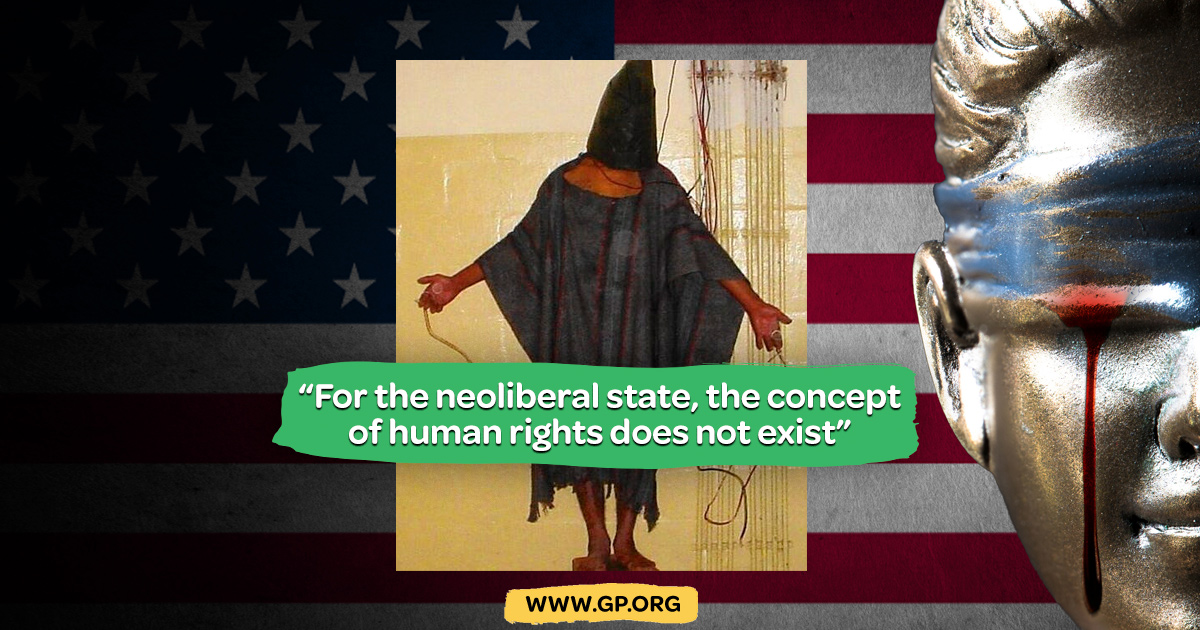 Yet, austerity has been a central component of state policy at every level of government in the U.S. and in Europe for the last four decades. In Europe, as the consequences of neoliberal policies imposed on workers began to be felt and understood, the result was intense opposition.  However, in the U.S. the unevenness of how austerity policies were being applied, in particular the elimination or reduction in social services that were perceived to be primarily directed at racialized workers, political opposition was slow to materialize.

Today, however, relatively privileged workers who were silent as the neoliberal “Washington consensus” was imposed on the laboring classes in the global South — through draconian structural adjustment policies that result in severe cutbacks in state expenditures for education, healthcare, state employment and other vital needs — have now come to understand that the neoliberal program of labor discipline and intensified extraction of value from workers, did not spare them.

The deregulation of capital, privatization of state functions — from road construction to prisons, the dramatic reduction in state spending that results in cuts in state supported social services and goods like housing and access to reproductive services for the poor — represent the politics of austerity and the role of the neoliberal state.

This materialist analysis is vitally important for understanding the dialectical relationship between the general plight of workers in the U.S. and the bipartisan collaboration to raid the Federal budget and to reduce social spending in order to increase spending on the military. This perspective is also important for understanding the imposition of those policies as a violation of the fundamental human rights of workers, the poor and the oppressed.

For the neoliberal state, the concept of human rights does not exist.

As I have called to attention before, a monumental rip-off is about to take place once again. Both the Democrats and Republicans are united in their commitment to continue to feed the U.S. war machine with dollars extracted — to the tune of 750 billion dollars — from the working class and transferred to the pockets of the military/industrial complex.

The only point of debate is now whether or not the Pentagon will get the full 750 billion or around 733 billion. But whether it is 750 billion or 733 billion, the one sector that is not part of this debate is the public. The attention of the public has been adroitly diverted by the absurd reality show that is Russiagate. But this week, even though the budget debate has been disappeared by corporate media, Congress is set to begin debate on aspects of the budget and specifically on the National Defense Authorization Act (NDAA).

Raising the alarm on this issue is especially critical at this moment. As tensions escalate in the Persian Gulf, the corporate media is once again abdicating its public responsibility to bring unbiased, objective information to the public and instead is helping to generate support for war with Iran.

The Democrats, who have led the way with anti-Iran policies over the last few decades, will be under enormous pressure not to appear to be against enhancing military preparedness and are likely to find a way to give Trump and the Pentagon everything they want.

The assumption of post-war capitalist order was that the state would be an instrument to blunt the more contradictory aspects of capitalism. It would regulate the private sector, provide social welfare support to the most marginal elements of working class, and create conditions for full employment. This was the Keynesian logic and approach that informed liberal state policies beginning in the 1930s.

The idea of reforming human rights fits neatly into that paradigm.

As seen, a state’s legitimacy was based on the extent to which it recognized, protected and fulfilled the human rights of all its citizens and residents. Those rights included not only the right to information, assembly, speech and to participation in the national political life of the nation but also the right to food, water, healthcare, education, employment, substantial social security throughout life, and not just as a senior citizen.

Today the consequences of four decades of neoliberalism in the global South and now in the cosmopolitan North have created a crisis of legitimacy that has made state policies more dependent on force and militarism than in any other time, including the civil war and the turmoil of the 1930s.

The ideological glue provided by the ability of capitalism to deliver the goods to enough of the population which guaranteed loyalty and support has been severely weakened by four decades of stagnant wages, increasing debt, a shrinking middle-class, obscene economic inequality and never-ending wars that have been disproportionately shouldered by the working class.

Today, contrary to the claims of capitalism to guarantee the human right to a living wage ensuring “an existence worthy of human dignity,” the average worker is making, adjusted for inflation, less than in 1973; i.e., some 46 years-ago. 140 million are either poor or have low-income; 80% living paycheck to paycheck; 34 million are still without health insurance; 40 million live in “official poverty;” and more in unofficial poverty as measured by alternative supplemental poverty (SPM).  And more than half of those over 55 years-old have no retirement funds other than Social Security.

In a report, Philp Alston, the UN’s special rapporteur on extreme poverty and human rights, points out that: the US is one of the world’s wealthiest countries. It spends more on national defense than China, Saudi Arabia, Russia, the United Kingdom, India, France and Japan combined.

However, that choice in public expenditures must be seen in comparison to the other factors he lays out:

For African Americans in particular, neoliberalism has meant, jobs lost, hollowed out communities as industries relocated first to the South and then to Mexico and China, the disappearance of affordable housing, schools and hospital closings, infant and maternal mortality at global South levels, and mass incarceration as the unskilled, low-wage Black labor has become economically redundant.

This is the backdrop and context for the budget “debate” and Trump’s call to cut spendings to Departments of Housing and Urban Development, Education, Labor, Health and Human Services, the Environmental Protection Agency, and even the State Department.

The U.S. could find 6 trillion dollars for war since 2003 and 16 trillion to bail out the banks after the financial sector crashed the economy, but it can’t find money to secure the human rights of the people.

This is the one-sided class war that we find ourselves in; a war with real deaths and slower, systematic structural violence. Neither the Democrats nor the Republicans can be depended on to secure our rights or protect the world from the U.S. atrocities. That responsibility falls on the people who reside at the center of the Empire to not only struggle for ourselves but to put a brake on the Empire’s ability to spread death and destruction across the planet.