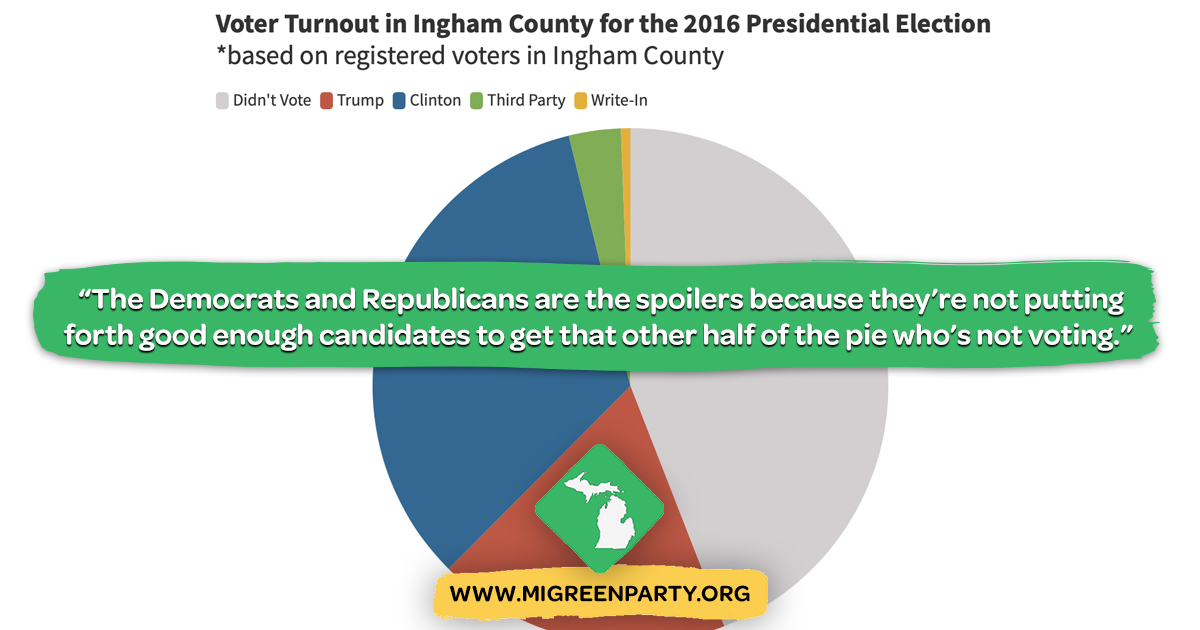 Robin Laurain, co-chair of the Michigan Green Party, thinks of voters like pie. Half of the pie is made up of those who don't vote at all, and the other half is mostly split down the middle between Democrats and Republicans.

"Then there's that little sliver on the side," Laurain said. "That's the third-party people."

Laurain, who is running to be a member of Michigan State University's Board of Trustees, said that there is the misconception that third-party members are the "spoilers" who throw off elections by siphoning votes from major-party candidates.

"They're not," she said. "The Democrats and Republicans are the spoilers because they're not putting forth good enough candidates to get that other half of the pie who's not voting, to vote."

Laurain has experienced that other half of the pie firsthand. She ran for the Michigan House in the 68th District in 2018. She said many people told her she was the first candidate who had ever come to their door. She said she was the first person they had ever voted for because they felt listened to.

"That's what's happening with our two-party system, they're not listening to the people," Laurain said. "They're listening to whoever's giving them the most money to run for office. That's why third parties are really, really, needed."

In every presidential election, there are always claims that third-party voters are the reason one major-party candidate wins over the other. As the country goes through another presidential election, members of Michigan's third parties said the real problem is that neither major party makes their side appealing enough to draw in third-party voters.

Luke Sciberras, chairman of the Capital Area Libertarian Party, said he assumes some members of his party will vote for either Biden or Trump.

"I think most people that are making that decision in that way are voting based on fear," Sciberras said. "They are afraid the other candidate will win, and our stance as a party is you should never be afraid of the president."

Michigan Green Party Co-Chair Tom Mair said he doesn't think that members of the Green Party will vote for Biden because of the stances he's taken on issues such as fracking and the Green New Deal.

Laurain, Mair and Sciberras all said they know a third-party candidate will not win this presidential election, but it's not just about the presidency.

"Sure, Michigan's a swing state," Sciberras said. "My thoughts on it are I really can't control what everybody else is voting for, but incremental victories actually mean something."

For example, if a third-party presidential candidate gets 5% of the vote nationwide, the party will become eligible for partial public funding for their candidate in the next general election campaign through the Presidential Election Campaign Fund, which citizens can opt into on their federal income tax form.

Another incremental victory for third-party candidates is the adoption of some of their issues by major-party platforms.

"If the Dems or the Republicans want to win, they should look at what our candidate is saying and then adopt some of those features," said Mair, who is running for a spot on the Michigan State Board of Education.

Mair used the example of when the current Green Party presidential candidate, Howie Hawkins, was running for governor of New York in 2018. He was able to get Gov. Andrew Cuomo to adopt a fracking ban as part of his platform in an attempt to capture some of Hawkins's voters base.

"There's that trading back and forth from the different candidates' platforms," Mair said. "That is a good way to run a campaign and I don't see enough people do it."

Mair said that while Hawkins will most likely not win the election, he is a good leader for the more decentralized, grassroots Green Party. He said Hawkins worked to get Green candidates on the ballot nationwide. This can be a challenge, Mair said, because each state has different rules for getting a candidate on the ballot.

Laurain said ballot access and getting Green candidates on the ballot is just the first step.

"What the strategy is, is to get enough down-ballot people elected into office so that people are used to what Greens represent and what they're all about," Laurain said. "And eventually, possibly, one day we would have a Green president."