Building People Power in the Time of Trump 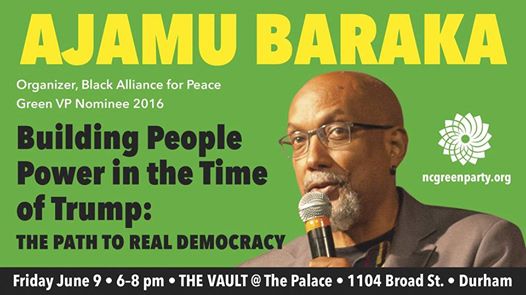 This event is free and open to the public. Donations to the NCGP are encouraged at https://ncgreenparty.nationbuilder.com/donate.

Ajamu Baraka — the Green Party 2016 vice presidential nominee, human rights activist, and national organizer of Black Alliance for Peace — will be speaking 6-8pm Friday, June 9, at the Vault in Durham (1104 Broad St.). NCGP co-chair Tony Ndege will be opening the talk for Mr. Baraka. We'll wrap up with a Q&A.

Baraka's talk will kick off the NCGP's Spring Gathering, our statewide meeting of NCGP members and allied people, which is slated for the next day (Saturday, June 10) at the Seedbed in nearby Mebane, North Carolina. Friday evening, immediately following Baraka's talk in Durham, the NCGP is holding a potluck dinner, also at the Seedbed venue in Mebane. RSVP for the NCGP Spring Gathering here >> https://tinyurl.com/kr988e9

SUBJECT OF THE TALK
Baraka will address the urgent need for an independent party of the left to challenge the right and provide a true progressive electoral alternative, accountable to its voters and membership base, which is something the mainstream corporate-funded parties have repeatedly failed to do. The 2016 elections revealed more than ever the deep crisis that America and humanity are facing, which has been decades in the making. It's become clear that the institutional levers of political and social power that are being offered to Americans as the only way to express their demands and grievances are under the complete corporate control. More and more people are realizing that the parties and organizations that serve the oligarchy, in an age when a tiny handful of people own a majority of the global wealth, are incapable of being reformed. The only way forward is to build our own institutions and political organizations of alternative power, overturning the present system and forging a path toward a global society that puts people, planet, and peace over profit. The time to build that people power is now.

ABOUT AJAMU BARAKA
A human rights defender whose experience spans four decades of domestic and international education and activism, Ajamu Baraka is a veteran grassroots organizer whose roots are in the Black Liberation Movement and anti-apartheid and Central American solidarity struggles.

Baraka is an internationally recognized leader of the emerging human rights movement in the U.S. and has been at the forefront of efforts to apply the international human rights framework to social justice advocacy in the U.S. for more than 25 years. As such, he has provided human rights trainings for grassroots activists across the country, briefings on human rights to the U.S. Congress, and appeared before and provided statements to various United Nations agencies, including the UN Human Rights Commission (precursor to the current UN Human Rights Council).

As a co-convener with Jaribu Hill of the Mississippi Worker Center for Human Rights, Baraka played an instrumental role in developing the series of bi-annual Southern Human Rights Organizers’ conferences (SHROC) that began in 1996. These gatherings represented some of the first post-Cold War human rights training opportunities for grassroots activists in the country. (Read more about Baraka at www.ajamubaraka.com/about/.)