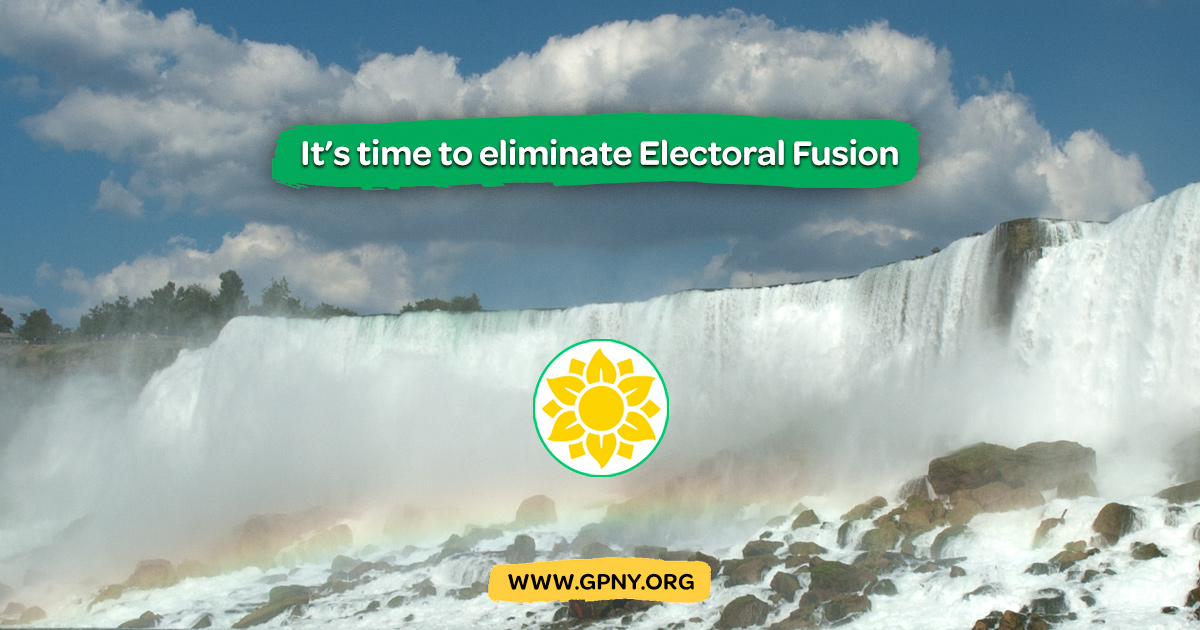 Albany - The Green Party of New York agrees with Monday’s decision by the Democratic Party State Committee to ban electoral fusion, though for fundamentally different reasons. Fusion, often presented as a tool to expand democratic choice, is in reality ballot lines-for-hire used to entrench the two-party system and provide political cover for the Democratic and Republican parties. It enables patronage machines that masquerade as small parties and shifts power from rank and file party members to candidates and campaign donors. And it contributes to an electoral arena where it is all but impossible for legitimate, independent third-parties like the Greens to compete. Fusion breeds confusion.

There are multiple examples of the problems that fusion voting causes. The Working Families Party notoriously gave Andrew Cuomo its ballot line last year, after running a primary candidate on an anti-Cuomo platform. The Independence Party has a large membership made up of voters who mistakenly believe they are not registered in any party, and their ballot line is coveted by both parties. Republicans chase the Conservative party line as Democrats do the WFP. Remember the Women's Equality Party, rumored to have been created by Cuomo in 2014 purely for its endorsement, and which has since been left to atrophy and disappear. And let’s not forget judicial candidates, who seem to collect ballot lines as if they were baseball cards. It is difficult to see how fusion voting serves the interests of democracy.

The Green Party proposes common sense electoral reforms to expand democracy and voter choice. Ranked-choice voting ensures the winner of an election has the absolute majority of votes and eliminates the so-called “spoiler effect.” It enables voters to cast votes for the candidate they want rather than against the candidate they like the least. Proportional representation would award seats to parties based on their vote percentages in an election, making all votes count. Banning opportunity-to-ballot (OTB), which is backdoor fusion, would prevent parties and candidates from hijacking other parties’ ballot lines. All too often we have seen Democrats and Republicans using OTB to lie to Green voters while petitioning, and seeding fake Green registrants in order to steal the Green ballot line and force an OTB primary. Independent redistricting commissions, automatic voter registration, and full public campaign financing are all important electoral reforms as well.

“Unlike the major parties’ fusion allies, the Green Party runs its own candidates and offers voters an independent, electoral alternative. If the Democratic Legislature really wants to make a bold move, they will end fusion, end OTB, and strike a blow against electoral corruption. Let it be a first step towards widening access to the polls and promoting competition between real political parties,” said party co-chair Peter Lavenia.