"Death" of Trans-Pacific Partnership Declared a Victory for People Power 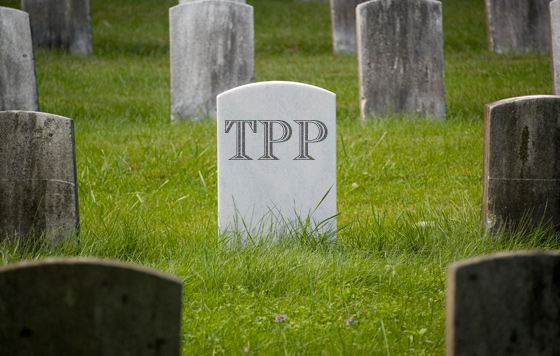 WASHINGTON, DC – Activists celebrated the announcement from Congressional leaders that the Trans-Pacific Partnership, a highly unpopular corporate trade agreement, would not be acted upon by legislators during the lame-duck session of Congress. Senate majority leader Mitch McConnell said the Senate would not act upon it, and House Speaker Paul Ryan admitted they did not have the votes for the deal to pass in the House.

The public 'death' of the TPP, while touted by president-elect Donald Trump, is actually the culmination of a 5-year grassroots campaign to resist the Trans-Pacific Partnership, a trade deal with broad impacts whose secretive negotiation process was questioned from the start. Hillary Clinton, one of the "leading drivers" of the negotiations as Secretary of State, pushed the TPP 45 times in Congress before opposing it as a candidate in the 2016 presidential election.

The TPP was resisted all along its formulation and ratification process by a 'movement of movements' coalition reminiscent of the anti-globalization movement that obstructed the World Trade Organization talks in Seattle in 1999. Groups organized around labor, environmental, food safety, internet freedom, and other issues combined their strengths in a 5-year effort to publicize the details of the trade agreement and push the fight over the TPP into an election year, where the trade deal became a central economic point of contention, rendering candidates' support for it politically toxic.

"The media is giving the credit to Donald Trump, but we would have blocked it no matter who won the election. We have power the establishment does not want us to know about," said Kevin Zeese, senior adviser to the Stein/Baraka campaign and founder of Popular Resistance. "We must use our power to stop corporate domination of government, the electoral process, and the two-party duopoly, and put in place a people's agenda and a democracy where people rule. Our goal is to make sure the public knows this is a people-powered victory," he added.

Activists also praised their victory over the TPP as a high point in the overall resistance to President Obama's corporate trade agenda, which included the TPP as well as the Transatlantic Trade and Investment Partnership (TTIP) and the Trade in Services Agreement (TiSA) with members of the European Union. Taken together, these trade agreements represented, in Zeese's words, a "one-way path to privatization" that would constitute a giveaway of up to 80% of public goods and services to private corporations.

"How we flushed the TPP is a perfect example of showing our power to change the agenda, and to assert this agenda for people, planet, and peace over profit against multinational corporations and the oligarchy," said Dr. Jill Stein, 2016 Green Party presidential candidate. "It is so exciting to have an example of how we can, and will, unite and fight in the struggle we are facing. It's time for people to set the agenda - not Donald Trump, not the DNC, and not the RNC. We've shown we have the power - now is the time to use it."