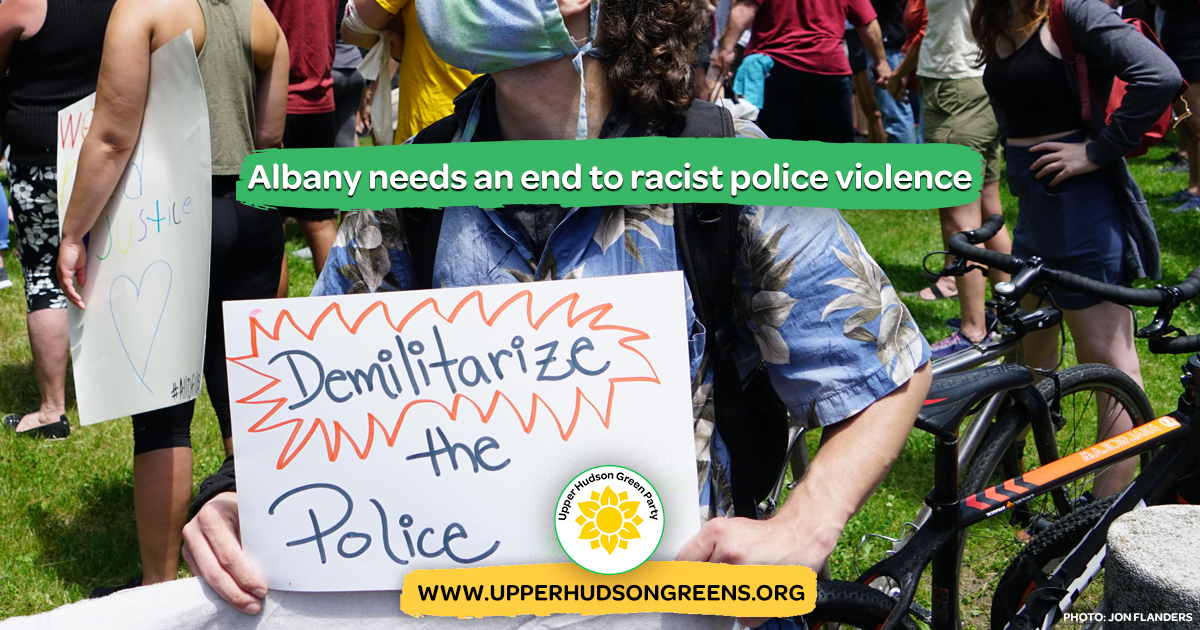 ALBANY, NY - The Upper Hudson Green Party strongly condemned the police use of force against unarmed protesters last night in Albany’s South End. Party leaders said that the protesters were expressing years of frustration with the Albany Police that included similar incidents that led to the murder of George Floyd in Minneapolis. Party officials said that the violent police response to the protest, which seemed to include police hurling objects at protesters from the roof of the South End Police Station, as well as tear gas, rubber bullets, and pepper spray, was a condemnable act of violence against the population.

The party said the police needed to be immediately removed from the streets, disarmed with strict new rules instituted for use-of-force, and that an open and ongoing dialogue with community leaders over the issues that caused last night’s protests should be initiated by city and county officials. Party leaders said that the response by Mayor Sheehan, County Executive McCoy, Police Chief Hawkins, DA Soares, and Sheriff Apple: to lie about outside agitators rather than admit the fault of the police, to ignore systemic racism that led to the anger of the protesters, and to claim that protesters were “terrorists” rather than police officers using excessive force was a sign that they continued to be unwilling to even take the smallest steps to address the real issues of the community.

“The Albany police should be removed from the streets, there should be immediate and severe restrictions placed on their use-of-force against civilians, and they should be disarmed. An independent body should be formed to determine improper conduct of police. Mayor Sheehan should immediately enter into open dialogue with community leaders and members in public forums that lead to clear-cut actions taken to resolve the current situation, systemic racism, and police violence in Albany. Anything else is not enough,” said Green Party of New York co-chair Peter LaVenia.

Posted by Upper Hudson Green Party on Saturday, May 30, 2020