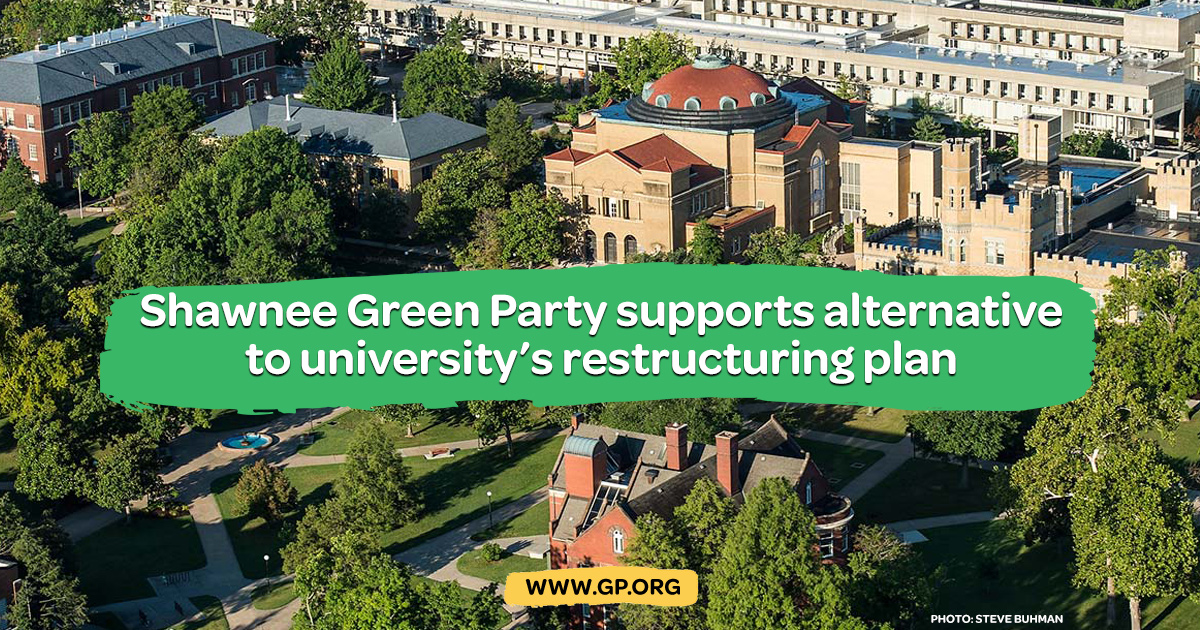 The local Shawnee Green Party Chapter is a grassroots political third-party that supports cost-free higher education, the legalization of marijuana, non-violence and a universal healthcare system.

The alternate plan includes lower tuition, adding programs for disadvantaged and minority students and removing changes regarding credits from two-year educational institutions which are factors that reduced enrollment.

"We're very concerned about this university," Whitney said. "We support efforts to create a positive alternative to the chancellor's plan which we think is pretty misguided."

Randall Auxier, a professor at the university and a Green Party candidate for the 12th district United States Congress, said the Green Party was formed around sound environmental issues and civil rights.

When it comes to education the Green Party supports more than free tuition, Whitney said. Books and room and board should also be included.

"Some countries have that and we should be able to do it here," Whitney said. "If we cut the military budget by a significant, substantial amount we could pay for things like free college education."

"For example, the Green Party is not on the ballot in all 50 states," Washington said. "Meaning the Green Party cannot win a presidential election under any circumstance."

The Green Party's stance on marijuana is to legalize it federally while decriminalizing all other drugs, Whitney said. Marijuana would help boost the economy and one thing southern Illinois can do is grow weeds.

"In a time when Illinois is struggling with its budget it makes an awful lot of sense to legalize cannabis," Whitney said. "Where we really need to go is legalize it federally."

The Green Party embraces non-violence and they support a cut in military spending.

"It's disgraceful that a place like Flint, Michigan can't even have lead-free water," Whitney said. "Yet we're spending over 1.3 trillion dollars to attack people in other countries and maintain all these military bases."

Whitney said what separates the Green Party from other parties is their stance on not accepting corporate donations.

"We firmly believe that in the long run that will be to our benefit as more and more people come to understand that we're a party of principle, not a party that's going to sell out to the highest bidder," Whitney said.

The process for running for office is different for a third party rather than a democrat or a republican, Auxier said.

"We have to physically go out to shopping centers and festivals and stuff and get people to sign their names saying that we should be on the ballot," Auxier said.

Despite the disadvantages, a third party faces you should vote for who you think the best candidate is, Auxier said.

"Vote your hopes, not your fears," Auxier said.

Whitney said the Green Party is the only party offering real change.

"We have to move and take the brave step of voting for people that are actually going to represent our values," Whitney said.

Whitney said he would be open to student internships in his campaign.

"I am actually looking to hire a quarter-time campaign assistant for my campaign for county board so there is actually a limited paid opportunity there," Whitney said.

The Shawnee Green Party Chapter meets twice a month. Public meetings are on the fourth Tuesday of each month at the Varsity Center.