The Unlearnt Lessons of 9/11 on the 20th Anniversary 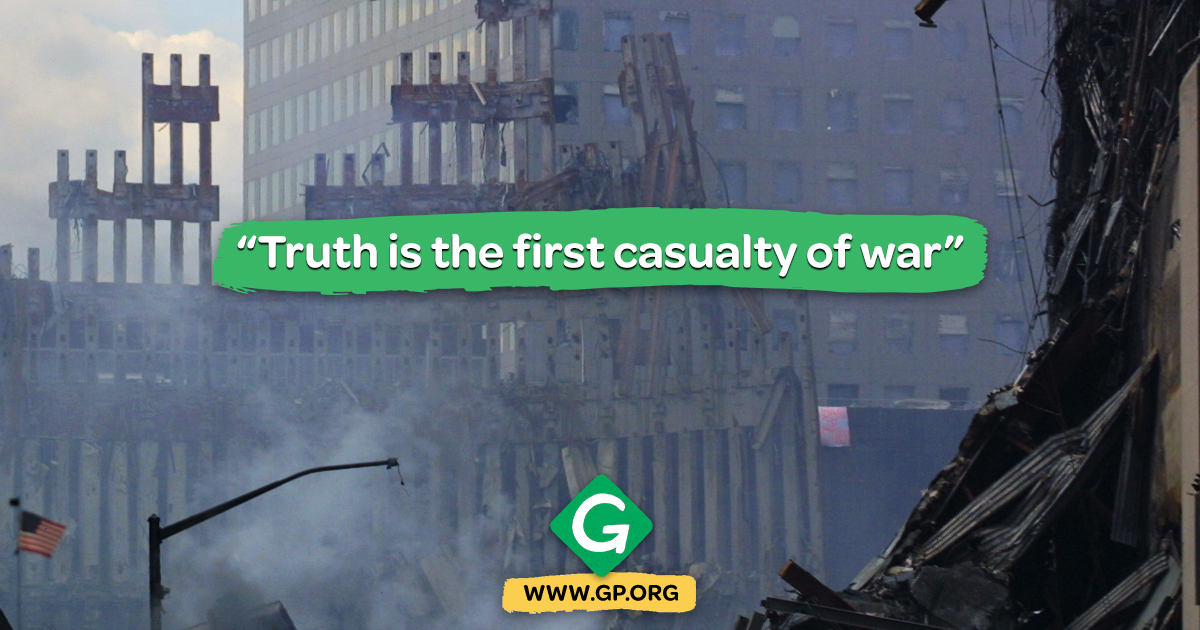 Twenty years after 9/11, America is less safe, a deeply troubled country, ravaged by COVID, racism, inequality, extreme weather from global warming, and political strife. Its political leaders have embraced an Orwellian approach to the truth, war is peace, with society embracing widely divergent concepts of reality.

As the 9/11 Families for a Peaceful Tomorrow remarked on the 19th anniversary, “In the name of U.S. national security and counterterrorism, our government has violated human rights; damaged the rule of law, international cooperation, and the United States’ reputation; set a dangerous precedent for other nations; fueled conflicts and massive human displacement; contributed to militarized and violent approaches to domestic policing; diverted limited resources from more effective approaches; and, most consequentially, destroyed hundreds of thousands of lives, primarily of civilian, Muslim, Black, and Brown people.”

Truth is the first casualty of war. The political establishment and the media squandered the worldwide sympathy for America after 9/11 by responding to it as a declaration of war rather than seeking a criminal prosecution. The neoconservatives in charge of the White House brazenly lied to the American people and the world, cynically treating 9/11 as another Pearl Harbor that Cheney and Rumsfeld had openly wished for as a pretext to invade Iraq to seize its oil fields.

A few weeks before the 20th anniversary, the United States made a humiliating retreat from Afghanistan, the latest imperial power to fall victim to the graveyard of empires. Left behind to an uncertain fate were women and many who assisted the U.S. The legacy included more than 170,000 Afghans killed as well as 2500 American soldiers.

We are likely to witness an escalating humanitarian crisis as millions of Afghans already lack access to basic necessities and human rights. No one would be surprised if civil war breaks out with local warlords. And much like global warming inflamed Syria’s civil war and refugee crisis, Afghanistan has been rocked by climate change. The past three decades have brought floods and drought in rural areas that have destroyed crops and left people hungry.

Also left behind were many American weapons which will not only arm the Taliban but as always will quickly make their way into the black market to arm militia forces throughout the Middle East, Africa and the rest of the world.

Researchers at Brown University estimate that the U.S. has spent $5.8 trillion on the war in Afghanistan and other conflicts stemming from the Sept. 11, 2001 attacks.

Perhaps the only silver lining is that President Biden, facing withering criticism at home and from allies for the chaotic evacuation, now feels pressure to deliver on his infrastructure and climate budget to show that he is still capable of effective leadership.

The so-called 9/11 Truth Commission was a textbook coverup to protect America’s intelligence community from what at best was its criminal negligence. The Commission members were all veterans of the foreign policy community and often had to recuse themselves from parts of the investigation due to their extensive conflict of interest. Even so, the Commission did fault the intelligence failures which allowed the attacks to occur. The bureaucratic turf wars among the CIA, FBI, etc. were far more important to the intelligence community than protecting the public. One question not asked was whether the public desire for another Pearl Harbor by the Vice-President and Secretary of Defense contribute to the intelligence and security failures.

The Presidents of both major parties had directed intelligence operatives to go easy on Saudi Arabia, including Bin Laden and his wealthy family connections. Though 15 of the 19 hijackers were Saudis, not only did the US not blame them but many Saudi Arabians in the US were allowed to immediately flee home while all other planes were grounded.

After the 9/11 Commission finished the whitewashing, the two co-chairs felt guilty enough to admit to two major lies in their work. One, the prime motivation of the hijackers was not the presence of American military troops in Saudi Arabia but rather America’s support for Israel’s horrible treatment of Palestinians.

Second, the Pentagon had repeatedly lied about the fact that the NORAD defense system was conducting an exercise the morning of 9/11 involving faked highjacked airplanes. Vanity Fair eventually was able to publish the transcripts of the chaos at the NORAD command center as the air controllers pleaded to remove the fake airplanes from the radar screen so that they could better coordinator a response to the real hijackers. Five years later the two co-chairs wrote an op ed in the NY Times to complain about the stonewalling by the CIA, including destroying information.

Obviously, the hijackers greatly benefited from attacking in the midst of the exercise. Not examined, at least partially due to the Pentagon’s lies, were whether the hijackers had access to this and other security information, and if so, how did they obtain it. Swept under the rug was the level of support and funding potentially provided to the hijackers by the ruling family of Saudi Arabia and the Pakistani ISI. President Biden earlier this month signed an executive order for a declassification review of some documents related to the 9/11 attacks, after pressure from families of victims who are demanding to know if Saudi Arabia helped the hijackers.

Also largely ignored was the role that the United States had played for decades in destabilizing Afghanistan that led to the so-called Al Qaeda training camps. The U.S., starting under President Carter, invested tax dollars and military operatives to overthrow the government of Afghanistan, consciously seeking to draw the Soviets, it’s neighbor to the north, into its own Vietnam. US efforts, which escalated under Reagan, included working with the Saudis, including bin Laden, there and then likely working with the ISI to push the Taliban into power in a failed effort to stabilize the resulting chaos.

All governments lie to its citizens about the conduct of its foreign policy, playing that chess game to serve the interests of the military contractors and corporate interests. 9/11 and Afghanistan are classic examples of blowback, a term the CIA first used in 1954 to explain the unintended consequence of a covert operation, in that case the U.S.’s overthrow of the democratically-elected government of Iran. American citizens usually see blowback  as "random" acts of political violence without a discernible, direct cause, because the public are unaware of the effected secret attacks that provoked revenge

American political and military leaders exploited 9/11 to advance their own agendas, plowing ever greater tax dollars to military contractors while curtailing civil liberties both at home and abroad. The human right abuses inflicted by America’s multiple military invasions and occupations helped recruit even more terrorists while contributing to the eroding power and respect for the American empire.

Since 9/11, the US has continued to turn a blind eye to the numerous human rights abuses of our allies, particularly the Saudis and Israel in exchange for access to oil and power in the Middle East. We have continued to isolate ourselves by using military power rather than diplomacy to advance our foreign policy agenda. To the rest of the world, the US is the dark imperial power that arrogantly tramples upon the rights of all other countries as a manifestation of “American exceptionalism”, viewed at posing the greatest threat to democracy in their countries.

US troops still remain in Iraq to help prop up its government. Drones and mercenary contractors often replace American soldiers – at greater taxpayer expense. The US continues to escalate tensions with Iraq, China and Russia as well as numerous Latin American countries starting with Cuba and Venezuela. The first 9/11 was the US  role in 1973 in murdering Chilean President Allende and overthrowing his democratically-elected government; President Bush unsuccessfully sought to appoint former Secretary of State Henry Kissinger, the architect of that coup, as the chair of the 9/11 Commission.

The military-industrial complex resists all efforts to end the Cold War; a new Axis of Evil is always ready to be trotted out. More than half of the discretionary federal spending goes to the Pentagon and military contractors while domestic needs are underfunded.

Domestic terrorism has supplanted foreign terrorism as the greatest threat to Americans, with decades of militias embracing white supremacy and nationalism leading to the January 6th armed insurrection at the Capitol to try to overturn the election results to keep Trump in power, an act of treason that many GOP Congressmembers voted to sanction.  In a March 2021 threat assessment, the Office of the Director of National Intelligence identified militia violent extremists alongside racially or ethnically motivated violent extremists as the most lethal domestic extremist threat.

Those who ignore history are often forced to repeat it. That is so true in America.

There is no way to peace. Peace is the Way.

Remember 9/11. Another world is possible