Unspeakable Police Violence - Will You Help the Protectors? 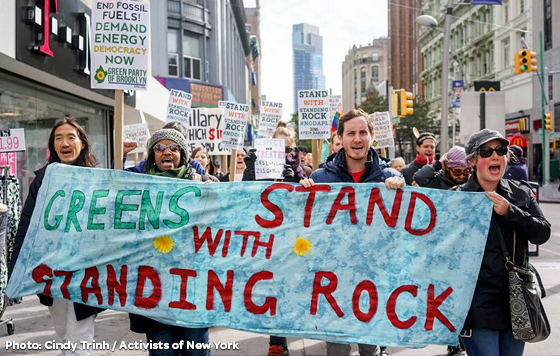 Indeed, if anything, Standing Rock is a bitterly ironic challenge to the colonial concept of "Thanksgiving".

There were horrific scenes, reminiscent of the genocidal Indian Wars of the late 19th century, except this time with modern-day weapons of water cannons, rubber bullets, and concussion grenades.

In fact, the police nearly blew the arm off one of the activists, Sophia Wilansky from New York, early Monday morning.

She was airlifted to a hospital in Minnesota where she faces potentially dozens of surgeries to try and save her arm.

Hundreds more have been hurt and dozens have been hospitalized. Green activists and the Water Protectors have literally put their lives on the line to protect the land against toxic oil spills and the desecration of sacred Indian sites.

Greens from all over the country are at Standing Rock, and a delegation of 7 people (6 from Colorado and 1 from Maine) were dispatched from the Stein/Baraka campaign from November 2 through November 9.

They went to stand in solidarity with the Indigenous peoples laying their lives on the line to protect the sacred earth and their traditions - an earth that we all live on - as well as to demonstrate for human rights and the right to peaceful protest.

That delegation, led by National Co-Chair Andrea Mérida Cuéllar, not only went to stand in ideological solidarity, but also delivered much-needed cold-weather supplies and gear to the camp.

Why are we Greens standing in solidarity? Why are we trying to support the Standing Rock action and help keep it going?

Because the earth they seek to protect is the same earth the Green Party is pledged to protect.

In fact, as you read this letter, Andrea Mérida Cuéllar and other members of the Green Party's Steering Committee are working together to see how we might fund a semi-permanent warming station at the camp, which would be sponsored by our Outreach Committee.

And that's why I'm writing you today. We need your help to make this warming station a reality.

We need your financial support so the Green Party can deliver this badly needed support throughout the harsh North Dakota winter to the Water Protectors and other anti-DAPL activists.

The situation in Standing Rock is dire, with the State Police and Sheriff's Department clearly ramping up the violence against peaceful, unarmed civilians.

Brooklyn-Greens-Standing-Rock.jpgBut the Water Protectors are determined to lay their lives on the line to stop the pipeline. Right now, work on the pipeline - just a quarter of a mile from the Missouri River - has been stopped as tribal leaders talk to the Army Corps of Engineers.

We need to do our part to force a permanent stop to the pipeline's construction.

Can you help today to make sure that the Green Party can deliver the warming station and continue its presence at the camp? The movement to stop DAPL is the most visible struggle against the rape of our environment right now, and it's up to us to stay in the fight with those who are on the ground.

Please, before you forget, give as generously as you can to GPUS today so that we can fund these and other actions. Our platform commits us to protecting the environment.

Ground zero is at Standing Rock.

We need your help! Give today.

P.S. Your donation of any amount will help the Green Party fund the Standing Rock support and a myriad of initiatives designed to help create the world that we believe in and deserve. Please don't delay. Give today, as generously as you can.