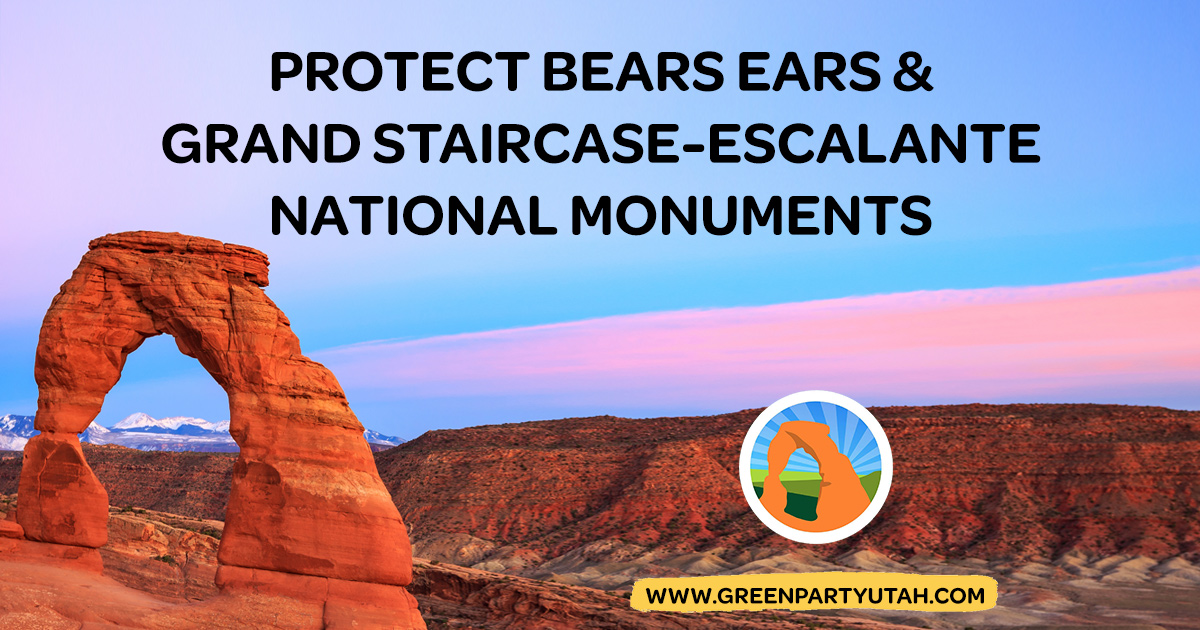 Salt Lake City, Utah - In the wake of a unilaterally destructive act by President Trump, in the form of executive orders to rescind the size of National Monuments Bears Ears and The Grand Staircase-Escalante, the Green Party of Utah calls for preserving the protections of large contiguous areas of habitat for regional biodiversity as established by previous democratically elected presidents.

"The Green Party stands in support of the five Indigenous Tribes who are filing a lawsuit to challenge Trump's plan to abolish the Bears Ears Monument," stated Adam Davis, Green Party Candidate for Congressional District 1. "The work of the Inter-Tribal Coalition to preserve the land that rightfully belongs to them must not be undone. These monuments are a hallmark of the Native peoples that have contributed so greatly to our state and to the nation." Shrinking the size of national monuments will open up public lands for development. It is argued by those in favor of reducing the size that development will not impact the land as much as human recreational activity.

"It is beyond belief that anyone would consider that human recreational activity has a greater impact on public lands than thousands of grazing cows and machinery that extracts natural resources while polluting the air and eradicating wildlife and plant species," said Ashlee Phillips, Co-Chair of the GPUT. "Reducing the size of the National Monuments takes away the protections afforded to the lands within their boundaries."

The Green Party platform supports the sovereignty of Native American tribal governments and the Federal Government's trust obligation to the First People Nations. Kimberly Bain, Co-Secretary of the GPUT, stated "The actions of Trump and our State Representatives to reduce these national monuments is a clear violation of the rights of our Indigenous hosts and the treaty obligations by the government. We support a legal and grassroots effort by Utah tribes to protect their land, traditions, rights and sacred spaces."