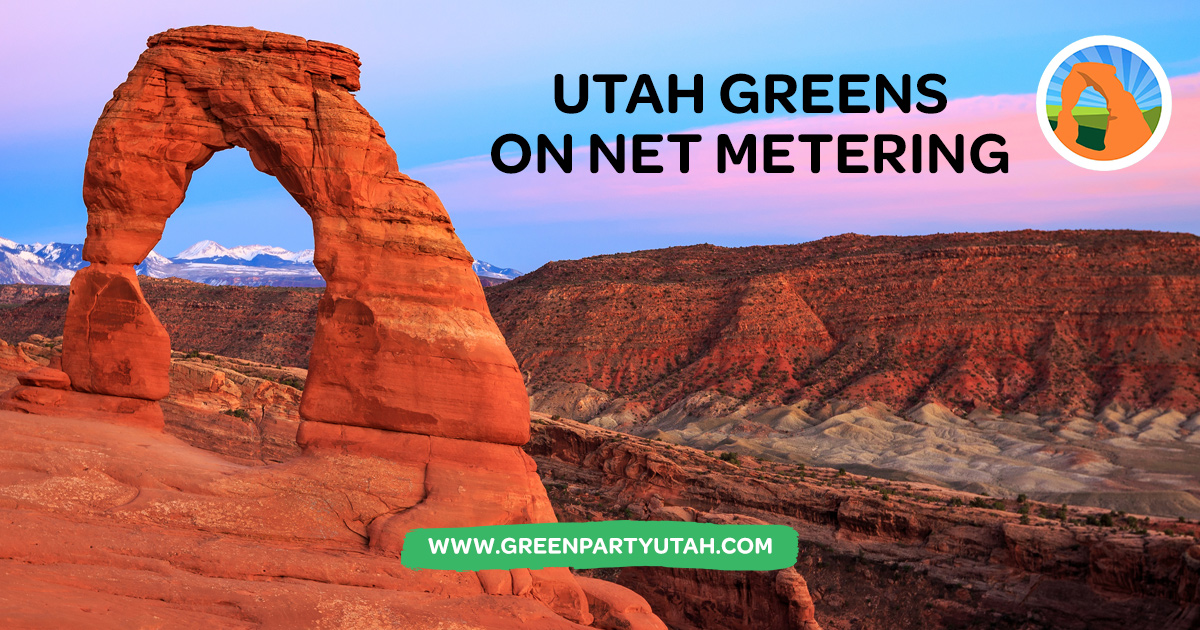 The Green Party of Utah has issued a statement to the Public Service Commission and to the Mayor of Salt Lake City in support of net metering, as a response to a request for a permit by Rocky Mountain Power to increase rates for rooftop solar users. Public comments and letters of support are being accepted through Wednesday, August 9th. A public hearing is being held August 9th to accept public comment as well.

Statement in Support of the Resolution on Net Metering

The Green Party of Utah (GPUT) believes that we must strive toward ecological balance by living within the resource limits of our communities and our planet. The GPUT supports a sustainable society that utilizes resources in such a way that future generations will benefit, and not suffer, from the practices of our generation. To this end we must move to an energy-efficient economy and live in ways that respect the integrity of natural systems.

Climate change is the gravest environmental, social and economic peril that humanity has ever met. The GPUT supports science-based policies to curb climate change.

The GPUT advocates a rapid reduction in energy consumption through energy efficiency and a decisive transition away from fossil and nuclear power toward cleaner, renewable, local energy sources. Toward these goals, we advocate:

The GPUT supports a plan for decentralized, bioregional electricity generation and distribution.

Decentralized power systems are likely to be more resilient in the face of power disruptions and will cut transmission losses, assure citizens greater control of their power grids, and prevent the massive ecological and social destruction that accompanies production of electricity in mega-scale projects.

WHEREAS, Salt Lake City municipal government has, through its *Climate Positive 2040* strategic plan, prioritized a near-term transition from carbon-generated electricity to clean renewable energy as a means of protecting the public health and safety of its residents; and,

WHEREAS, Salt Lake City Mayor Jacqueline Biskupski and every member of the Salt Lake City Council on November 1, 2016 signed a joint resolution *Establishing Renewable Energy* *and Carbon **Emissions Reduction Goals for Salt Lake City* that includes 100% renewable electricity city-wide by 2032 and carbon emissions reduction of 80% (from the 2009 baseline) by 2040; and,

WHEREAS, the joint resolution acknowledges that "there is scientific consensus regarding the reality of climate change and the connection between human activity, especially the combustion of fossil fuels that create greenhouse gases, and warming of the planet", and that Salt Lake City is "already feeling the effects of climate change locally through increased temperature, changes in water systems, extreme weather events and other disruptions that threaten our economy, residents and overall quality of life;" and,

WHEREAS, Salt Lake City continues to suffer diminished air quality from sources including the burning of fossil fuels; and,

WHEREAS, Salt Lake City's electricity provider, PacifiCorp [dba. Rocky Mountain Power], generates most of its electricity by burning fossil fuels and plans to do so for the next 20 years; and,

WHEREAS, Rocky Mountain Power has filed a rate increase request with the Utah Public Service Commission for a new, three-part rate for its rooftop solar net-metering customers that would double the monthly customer charge to $15, impose a "demand" charge of $9.02 times the monthly kilowatt peak, and reduce by 64 percent --from 10.7 cents to 3.8 cents-- the rate of compensation for solar energy exported to the grid; and,

WHEREAS, The Office of Consumer Services (OCS) on June 8, 2017 testified that Rocky Mountain Power has not provided evidence that this dramatic change is necessary" and would "impose a punitive, unsupported rate design on new net metering customers" and would be "contrary to the public interest;

NOW THEREFORE, be it resolved as follows that the Green Party of Utah: