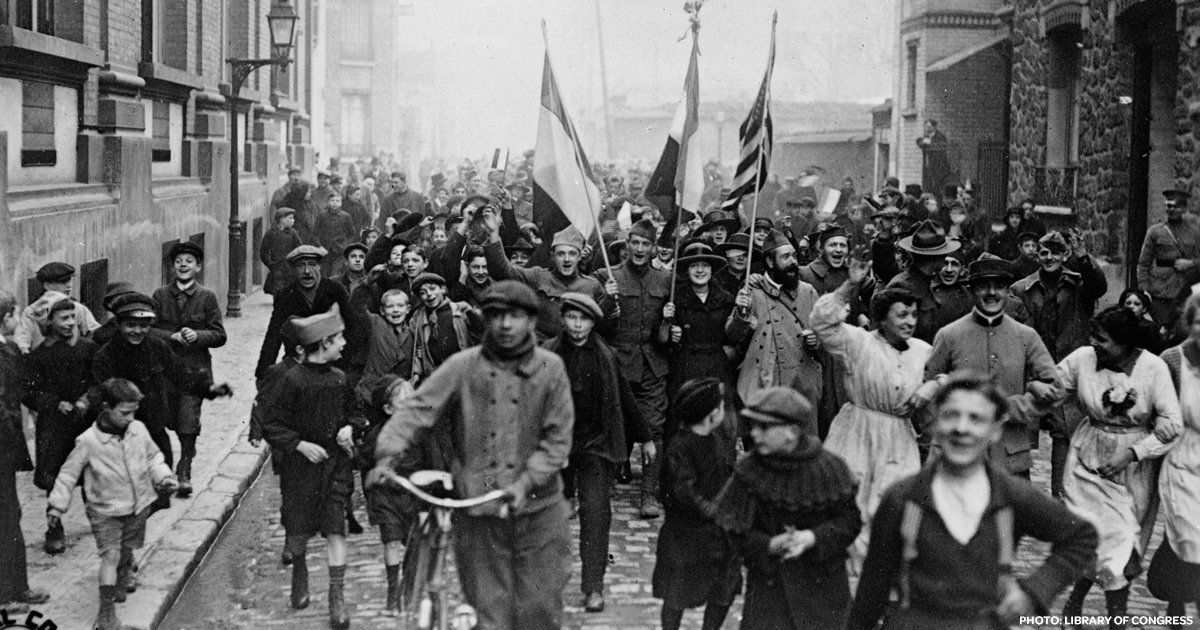 Members of the Photographic Division of the U.S. Signal Crops organize a parade to celebrate the signing of the armistice.
Vincennes, Seine, France. November 11, 1918.

It surprises many to learn “Veterans Day” as we celebrate it in the U.S. was originally remembered internationally as “Armistice Day” to celebrate the end of World War I. For decades, people came together to express a communal commitment to ending all wars, not for sales at big box chain stores and NFL “tributes” that are actually paid-for advertising from the U.S. Armed Forces.

Our government is not just at war around the world, it’s at war with history. It tries to erase the memory of people’s resistance to militarism and exploit our natural solidarity with veterans to rope us into supporting illegal invasions and unjust occupations.

But they’ll never stamp out the legacy of peace movements and the Green Party will never stop fighting to end this system of empire and exploitation. Will you contribute $19.19 today in honor of the year of the very first Armistice Day, to help us elect Greens who will dismantle the military industrial complex and redirect those resources toward an Eco-Socialist Green New Deal?

“Our decent impulse, to recognize the ordeal of our veterans, has been used to obscure the fact that they died, they were crippled, for no good cause other than the power and profit of a few. Veterans Day, instead of an occasion for denouncing war, has become an occasion for bringing out the flags, the uniforms, the martial music, the patriotic speeches reeking with hypocrisy. Those who name holidays, playing on our genuine feeling for veterans, have turned a day that celebrated the end of a horror into a day to honor militarism.”

Professor Zinn gets to the truth of it: As war turns people against each other, the warmongers try to use sentiment and ceremony to turn us against our own conscience. We must have the courage to stand up against political smears and popular pressure to champion this essential message: that all war is a project of mass murder, waged by corrupt elites who sacrifice nothing.

Any political leader who betrays that message is unworthy of our support. Help build the Green Party with your contribution today so we can beat back the tide of jingoistic and xenophobic propaganda, run real peace candidates for office and end the bi-partisan, perpetual war economy that endangers our entire planet.

For Peace, People and Planet Over Profit,
Green Party of the United States

P.S. The first celebrants of Armistice Day rang bells because church bells went silent during the war. Ring in your support for peace all year long by becoming a Green Party Monthly Sustainer!

Caption from Catalogue of Official A.E.F. photographs taken by the Signal Corps, U.S.A., 1919:
Members of the Photographic Division of the Signal Crops organize a parade to celebrate the signing of the armistice.
Vincennes, Seine, France. November 11, 1918.