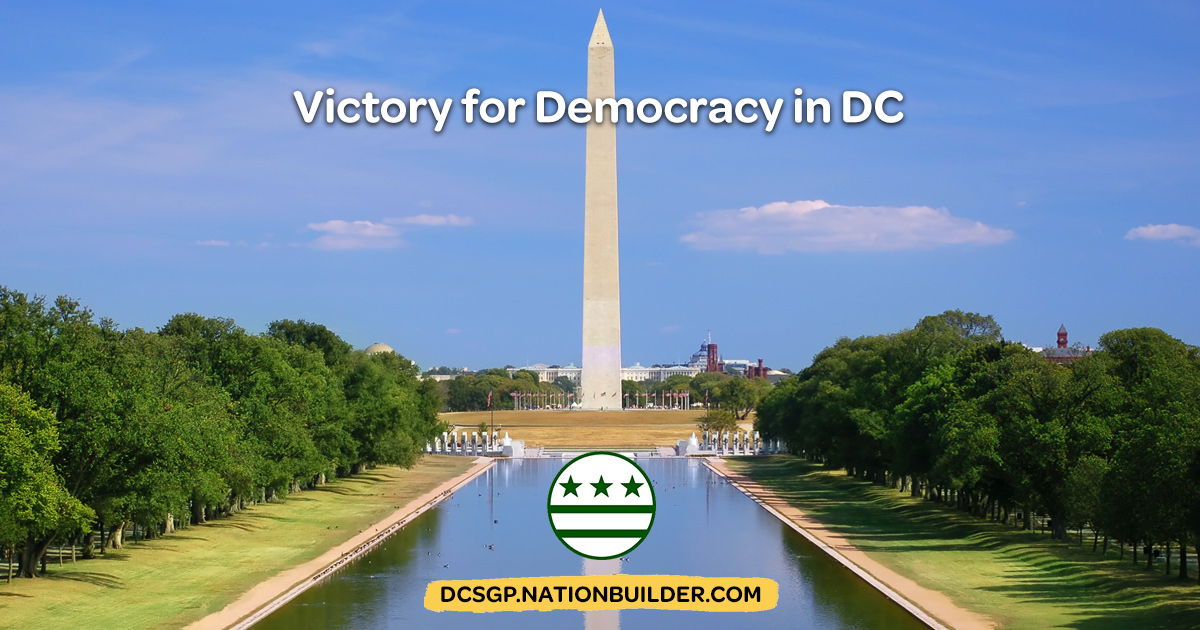 WASHINGTON, D.C. – Advocates and activists celebrated on Tuesday as Mayor Bowser signed the Fair Elections Act, a major democracy reform that will bring small donor public financing to local elections. The campaign to pass the bill has been supported by dozens of economic, social, and racial justice organizations, as well as the entire D.C. Council.

"We were very happy to see Mayor Bowser help amplify the voices of D.C. residents by signing the Fair Elections act," said Dexter Williams, Ward 7 Chair of the DC Fair Elections Coalition. "Now, we want to work with her to make sure this program is successfully funded and implemented this year."

The Mayor's signature comes after the D.C. Council voted unanimously to pass the Fair Elections Act in February. Similar legislation has been passed in New York City, Seattle, and Los Angeles, and locally in Howard and Montgomery Counties in Maryland. Prince George's County, MD also is considering a Fair Elections bill. In D.C., the bill was backed by the DC Fair Elections Coalition, which counts more than 70 organizations as members.

Small donor empowerment programs provide public matching funds to candidates who accept only small contributions, rather than relying on wealthy donors and special interests to bankroll their campaigns. This way, candidates can run for office, and win, even if they don't have access to wealthy friends or a message that appeals to wealthy donors.

Public financing programs lower barriers to entry in often costly election campaigns, especially for people of color and women, who can lack access to the kind of network of wealthy donors needed to run for office. A 2016 study by Demos found that D.C.'s political donors are whiter, wealthier, and more male than the District's population as a whole.

"It's fantastic to see D.C. Fair Elections take another important step towards a politics that is of, by and for the people, and not corporations and monied interests. This is a great reminder that while our democracy often seems threatened, communities across the country can and should take action to reclaim their voices. Congratulations!" Said Joe Ready, Democracy Program Director for U.S. PIRG.

"The Fair Elections program will be good for voters, good for candidates, and good for D.C. as a whole," said Zach Weinstein, campaigns manager with D.C. Working Families. "We're thrilled that Mayor Bowser is supporting this effort to make our elections more open and inclusive, and we hope she will include funding for the program in her upcoming budget as well."

"We are thrilled to learn that Mayor Bowser signed the Fair Elections Act. D.C. residents in every ward understand that our democracy is stronger when our donor base looks more like D.C. communities. We look forward to seeing her invest in our democracy in the FY19 budget," said Kesh Ladduwahetty, Chair of DC for Democracy.

"This is a huge step forward for the District and for our democracy. With officials truly elected by the people to serve the people, we can look forward to greater investments and attention paid to all of the pressing issues affecting District residents like housing security, economic justice, food access, healthcare, and community safety," said Monica Kamen, co-director of the D.C. Fair Budget Coalition.

"We're delighted that Mayor Bowser heard the citizens of the District loud and clear. DC Fair Elections is the right step for racial equity and inclusivity in our elections. Everyday people soon will have a greater say in D.C. elections, not just deep-pocketed donors," said Aquene Freechild, Democracy Is For People campaign director at Public Citizen. "We look forward to working with the Mayor and Council to fully fund and implement the program."

"At a time when many people have lost faith in our political system, the District is stepping up to invest in a more inclusive and equitable future," said Susan Mottet, state legislative director at Every Voice. "In a sign that efforts to strengthen our democracy are gaining momentum, the District has joined the growing ranks of cities, counties, and states across the country working to reduce the dominance of big donors, empower everyday residents, and open up our elections to a wider field of qualified candidates."

"The same big-money fossil fuel corporations polluting our air, water and climate are also polluting our democracy and flooding our political system with dirty money," said Rebekah Whilden, Organizer for the Sierra Club DC Chapter. "Now that Mayor Bowser has signed the Fair Elections Act of 2017 and has given her assurance that she will fund the program, we know that democracy is being put in the hands of residents of DC."

"We applaud Mayor Bowser for supporting the Fair Elections Act of 2017 and look forward to her continued support for the program in her budget," said Emmanuel Caicedo, Demos Senior Campaign Strategist. "This legislation will break down barriers to running for office, and amplify the voices of people of color and low-income households, who are often drowned out by donors with bigger wallets. Today we have seen proof that the District of Columbia cares about democratizing elections and empowering small donors."

The bill provides a 5:1 match on small dollar-contributions from D.C. residents, as well as start-up support to help qualified candidates get their campaigns up and running, and would be available to candidates for D.C. State Board of Education, Council, Attorney General, and Mayor. Candidates will have to collect a required number of small contributions from D.C. residents before receiving any public money, as well as accept lower contribution limits and reject all corporate and political action committee contributions.