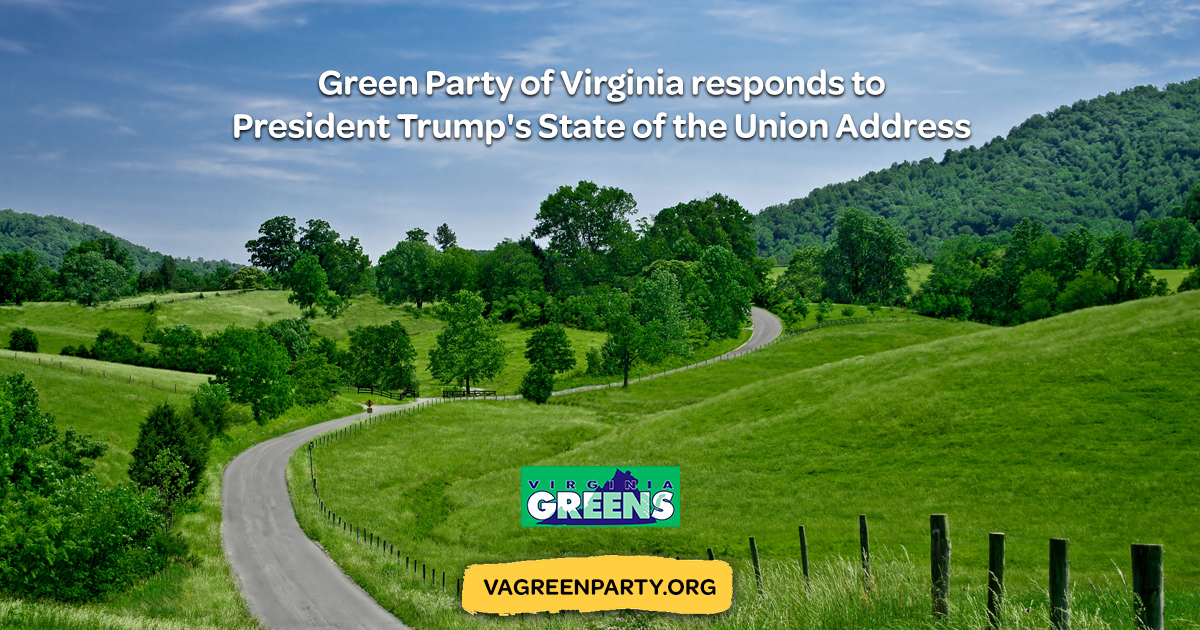 RICHMOND, VA - Since the previous State of the Union address, our country has continued to move in the wrong direction. In 2018, American carbon dioxide emissions increased by 3.4%, while fracked gas pipelines are threatening communities in Virginia, Maryland, Florida, North Dakota, South Dakota, Pennsylvania, and more. Hate crimes increased for the third straight year. Our military budget exploded once again, and our troops remain mired in overseas conflicts despite President Trump’s promises to bring some of them home.

A recent report from the Commonwealth Fund found that four million Americans lost health insurance between 2016 and 2018. Families are still being separated at the border. According to the World Justice Project, the United States ranks only 19 of the 35 richest countries when it comes to protecting civil rights, government transparency, and other measures of legal justice. We are not meeting our human needs for ecological sustainability, social justice, peace, and grassroots democracy.

President Trump is at best indifferent to these problems, as are the Republican and Democratic parties. Trump spent a great deal of his State of the Union denouncing and attacking immigrants using false statistics and outright lies. Democrats like our Virginia governor Ralph Northam have forced unwanted, unnecessary, and unsafe pipelines on Virginians and blocked needed action on climate change. Democrats joined with Republicans to expand the military budget and many condemned even President Trump’s meager attempts at ending overseas conflicts. Democrats have declined to push for ranked-choice voting in Virginia, which would allow for greater participation in our democracy.

The state of our Union is precarious, not just because of Trump, but because of the political and economic systems which sustain war, injustice, ecological collapse, and limited political participation. Democrats and Republicans share the guilt for our country’s problems. The Green Party, however, is not beholden to the wealthy and powerful like the other major parties. We have never and will never take corporate money. We struggle for a single-payer healthcare system, the only one which will cover every American and finally bring down the price of healthcare. We fight for a humane immigration system that includes a pathway to citizenship, not border walls, either physical or technological. We work towards peace abroad and at home. Only the Green Party, with its commitment to peace, justice, ecological wisdom, and democracy has the solutions to this crisis.