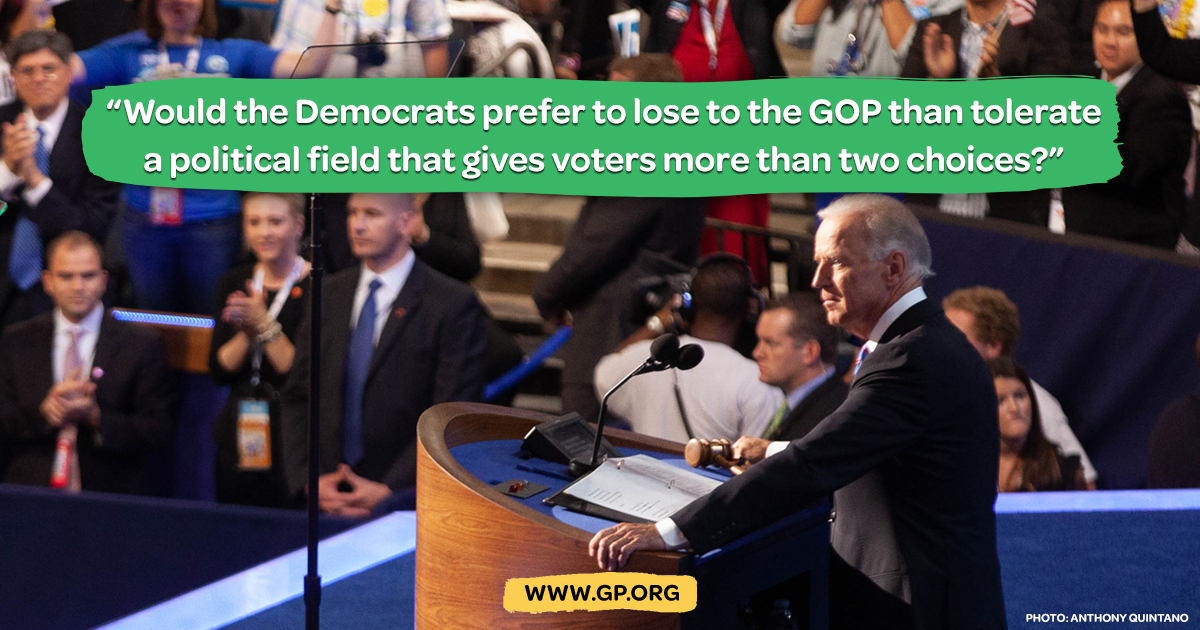 In the past month, we’ve seen a small flood of open letters from environmental leaders and long-time leaders on the left (Noam Chomsky, Cornel West, and others), and articles, all with the same basic message: “Vote for Biden in 2020, Fight Him Later.”

It’s hard to argue with them. Donald Trump needs to go. Sure, we’ll need to challenge Joe Biden to do the right thing if he wins. The signers are all too aware that Biden’s campaign platform and troubling record as senator promise another Democratic administration dedicated to war and Wall Street.

That brings us to the two necessary components missing from “Vote Biden, Fight Him Later.” The first is a call to enact Ranked Choice Voting (RCV).

The second is an acknowledgement that without a declaration of independence from the Democratic Party, Biden will feel no pressure from the left.

RCV cancels the alleged spoiler factor that Democrats and their progressive apologists fret over in every election. The main target of the open letters and essays is people who might be tempted to vote for Green presidential nominee Howie Hawkins and running mate Angela Walker, as if the main obstacle to a Biden victory will be the votes they receive. More about that below.

The Bernie Sanders campaigns in 2016 and 2020 showed us how millions of Democratic voters, especially young people, want an alternative to neoliberals like Hillary Clinton and Joe Biden — and revealed how intensely the Dem establishment will resist any effort to push the party to the left.

Biden and his fellow corporate-cash Democrats will ignore pressure from progressives as long as they can take our votes for granted. If we want to have any effect on the policies of the Biden-Harris administration, we must stop allowing that to happen.

Ranked Choice Voting is one of several overdue election reforms, including Proportional Representation, abolition of the Electoral College, and repeal of state ballot-access laws designed by Ds and Rs to privilege their own candidates and hinder third-party candidates and independents. (Among such laws is the requirement in some states of a presidential ticket for a party to achieve ballot status.)

RCV is already on the books in some cities and in Maine, where Lisa Savage is running a strong Green campaign for the U.S. Senate.

While Dems continue to cry “Spoiler!”, they’ve mostly rejected RCV, even when it would give their own candidates an advantage. Al Gore and Hillary Clinton would have won easily with RCV. Instead, they accuse Greens of stealing or siphoning votes away from their candidates, as if the Democratic Party owns our votes.

It makes us wonder if Democrats would rather lose to the GOP than tolerate a political field that gives voters more than two choices.

Since 2016, they’ve complained that Jill Stein, along with Russian bots and Wikileaks, is the reason they lost in 2016. These were negligible factors at best in the election outcome.

In reality, Dems lost millions of votes because of an uninspiring neoliberal warhawk nominee who botched her campaign strategy, declining to visit two key swing states. Nonvoters and the Electoral College handed Trump his victory. The nine percent of registered Dems who voted for Trump, according to exit polls, also helped put him over the top. The Democratic Party doesn’t want to talk about that.

While leftist circles fuss over the possibility that Hawkins will spoil in 2020, here’s a more likely scenario (and it’s not going to endear me to some Greens): Hawkins’s numbers will turn out like the 2004 results for David Cobb (Green) and Ralph Nader (Independent), both of whom got under a half percent and had no effect on the outcome of the election.

Progressives who might otherwise have voted Green in 2004 overwhelmingly voted for John Kerry (D) to get rid of George W. Bush (R). I’ll be surprised if Hawkins draws more than a sliver of one percent.

Here’s the kicker: Kerry still lost. Democrats are all too capable of losing elections without third-party help.

If “Vote Biden, Fight Him Later” advocates are so worried about the spoiler effect, they should urge a vigorous campaign to enact RCV.

The Threat of DemExit

President Franklin D. Roosevelt didn’t introduce Social Security and the rest of the New Deal out of the goodness of his heart. He did it because he feared an exodus of working Americans from the Democratic Party to socialist and communist parties. FDR grabbed the idea for New Deal programs from socialists.

We can trace the scarcity of big progressive ideas after the middle of the 20th century to the consolidation of the Two-Party Racket’s power.

Who introduced the Green New Deal in the U.S.? Howie Hawkins, during his 2010 New York gubernatorial campaign. Jill Stein brought it to national attention in her 2012 presidential race, after which progressive Dems adopted it (and watered it down).

It wishes all these things would just go away. It wants progressives and those worried about catastrophic climate change to vote Democrat and then shut up.

Without the possibility of a progressive DemExit, President Joe Biden will have no reason to change direction and support the Green New Deal, Medicare For All, and economic policies that benefit workers instead of CEOs and top investors. He’ll maintain the bipartisan commitment to unprovoked military aggression and bloated military budgets.

When establishment Dems read “Vote Biden, Fight Him Later” and see that the authors pose no threat of a revolt at the polls, they know they have nothing to worry about.

The irony is that their power isn’t safe at all. Dems’ service to plutocrats and abandonment of their traditional constituencies have repeatedly cost them elections ever since President Bill Clinton took up the neoliberal banner of the Reagan Revolution. Their retreat to the right emboldened the GOP’s extremist wing and helped place Orange Nero in the White House.

Democrats need to be told they must earn our votes, that they can no longer take progressive support for granted.

How can we declare independence? The third-party option is one way. Another way is a voter pledge: “I will vote only for candidates who’ll work to give us Medicare For All. No exceptions.”

Imagine the persuasive force of a mass vow to unregister Democrat unless Biden makes implementing the Green New Deal his top priority. Let’s admit that the difference between a science-denying Republican and a Democrat who believes the warnings but takes only minimal action isn’t going to matter much to people dealing with the effects of climate change 40 years from now. It’s the difference between driving a car off a cliff at 120 mph and driving of a cliff at 60 mph.

It goes almost without saying that election-related action must be combined with other kinds of activism, including street protest and strikes when necessary to drive the point home.

Without a demand for RCV and independence from the Democratic Party, we face an endless repetition of Clintons and Bidens versus Bushes and Trumps or Someone Even Worse in every future election. Any hope for change beyond the immediate Dump Trump imperative depends on whether we take these steps.