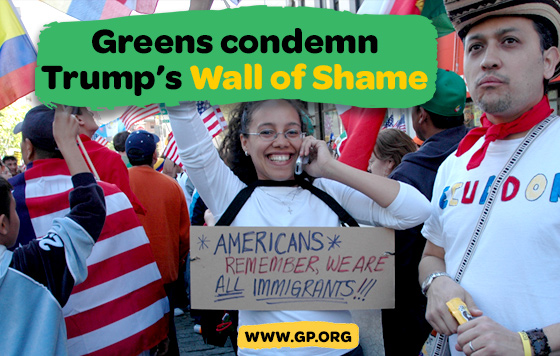 "Trump's executive orders are an appeal to white supremacy, xenophobia, and post-9/11 paranoia that should outrage all those who care about justice and human rights," said Andrea Mérida-Cuéllar, co-chair of the Green Party of the United States and co-chair of the party's Latinx Caucus.

"The wall and immigration restrictions will do nothing to improve our economic security, stop crime, or prevent terrorism. The orders are designed to distract Americans from failed bipartisan foreign policies and the real causes of economic inequality, by vilifying Latinos, Muslims, and other scapegoats. The indiscriminate restrictions on Muslims also divert attention from powerful Wahhabists who are funding extremism, inflicting grave injustices on LGBTQiA+ Saudis, women and immigrants, and receiving U.S. aid," said Ms. Mérida-Cuéllar.

The Green Party supports sanctuary cities threatened with the loss of federal funding because of the executive orders. The party also supports DACA ( Deferred Action for Childhood Arrivals ) and calls on President Trump to leave the program intact, while opposing the surveillance-state aspects of the DACA's application and reauthorization processes.

Greens said Mr. Trump's claim that immigration policies have been too lax recently was absurd, given the record number of deportations under the Obama Administration, nearly half of which took place under "expedited removal orders" that denied court hearings. Greens called the raids and deportations a stain on President Obama's legacy.

Greens said that Mr. Trump's inhumane and Islamophobic order targeting immigrants, refugees, and visitors from Muslim countries conforms with the 2016 Consolidated Appropriations Act, which Congress passed with both Democratic and Republican support. U.S. bombs dropped on six of the seven Muslim countries listed have driven civilians to seek refuge in the U.S. and other countries.

Many of those in Muslim and Latin American countries who are targeted by Trump's orders are fleeing the results of U.S. policies, including devastation caused by the Iraq war and other military ventures, support for brutal regimes, free trade pacts, and the war on drugs.

Greens said that reducing the flow of immigrants and refugees requires reversing these policies. Meanwhile, the U.S. has an immediate responsibility to protect the rights and well-being of people who seek relief. Contrary to racist lies about terrorists, violent criminals, disease carriers, and job snatchers crossing the border, the great majority of immigrants are seeking jobs and a better life for themselves and their families.

"Many of those targeted by Trump's orders are trying to escape the results of U.S. policies. Those coming to the U.S. from Muslim countries are fleeing U.S. bombs and regional devastation caused by the Iraq War and other military ventures. Hondurans, especially children, are fleeing violence and crime inflicted on their country by a coup regime that the U.S. supported. Mexicans have been fleeing impoverishment caused by NAFTA for the past two decades. Many of those from Latin American nations are fleeing violence and extreme poverty caused by the U.S. war on drugs," said Tamar Yager, co-chair of the Green Party of the United States.

"If we want to reduce the flow of immigrants and refugees, these policies must be reversed. Meanwhile, we have an immediate responsibility to protect the rights and well-being of people who seek relief in the U.S. Contrary to racist lies about terrorists, violent criminals, disease carriers, and job snatchers crossing the border, the great majority of immigrants are seeking jobs and a better life for themselves and their families. They deserve a welcome and an offer of citizenship," said Ms. Yager.