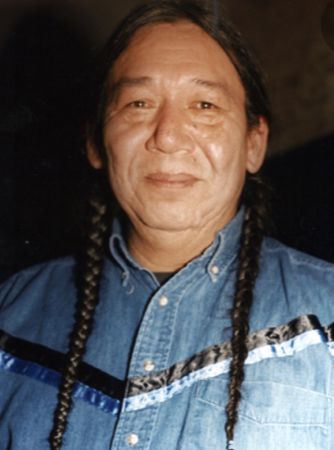 Walter A. Bresette was a prominent Anishinabe (Ojibwe, Chippewa) activist, anthropologist, politician, and author most notable for work on environmental issues and Ojibwe treaty rights in northern Wisconsin and the Lake Superior region. He founded or co-founded several organizations including Witness for Nonviolence, the Midwest Treaty Network, and the Wisconsin Green Party. Walter died Sunday, February 21, 1999 at St. Mary's Medical Center, Duluth.

He was born on July 4, 1947 in Hayward, Wisconsin to Wilfred and Blanche (LaFernier) Bresette. He graduated from Bayfield High School in 1964. He served in the U.S. Army for four years. He graduated from the Chicago School of Art.

He was a member of the Loon Clan and the Red Cliff Band of Lake Superior Chippewa. Walt had been co-owner and operator of the Buffalo Bay Trading Company in Red Cliff for a number of years. Walt will be remembered as an Anishinabe peace and justice advocate; an environmental, treaty rights and community activist; an author, elegant speaker and writer; lecturer and trainer of people as "witnesses for nonviolence." He was a fun loving, traditional man who believed in fighting for the rights of all people. Walt was a cofounder of the Witness for Nonviolence, the Midwest Treaty Network, the Anishinabe Niijii, the Lake Superior Greens and the Wisconsin Greens. He was a founding board member of WOJB Public Radio on the Lac Courte Oreilles Reservation. He served as a host of the Anishinabe Way Cultural and Spiritual Sobriety Gatherings and of the Protect the Earth Community Gatherings in northern Wisconsin. His current active affiliations included, the Lake Superior Alliance, the Great Lakes Regional Indigenous Environmental Network, the Arctic to Amozonia, the W.A.T.E.R. Campaign, the Waub Ojeeg Institute for Cultural Preservation, the Anishinaabeg Millennium Project, the Project Underground and Honor the Earth Campaign. A book is being compiled about Walt Bresette's life.

Anyone who has a story or thoughts about his life is asked to please send them to: Anishinabe Niijii, Attn.: Sandy Lyon, Box 31, Springbrook, Wisconsin 54875; e-mail, [email protected] or check his web page, at http://www.protecttheearth.com.

Funeral service was held at 10:30 a.m. on Thursday, February 25 at Holy Family Catholic Church in Bayfield, Wisconsin. The Rev. Glenn Phillips OFM officiated. Visitation was after 5 p.m. at the Red Cliff Youth Center with a prayer service held at 7 p.m. The interment was in St. Francis Cemetery in Red Cliff, Wisconsin. Members of Red Cliff, and Bayfield VFW and American Legion Posts conducted military rites at the cemetery. Memorials or donations may be made in memory of Walt and sent to: Route 1 Box 117, Bayfield, Wisconsin 54814, C/O Joseph Bresette, his brother. Arrangements by Bratley Funeral Home, Washburn, Wisconsin.