Watch out for the signs of foul play at the polls 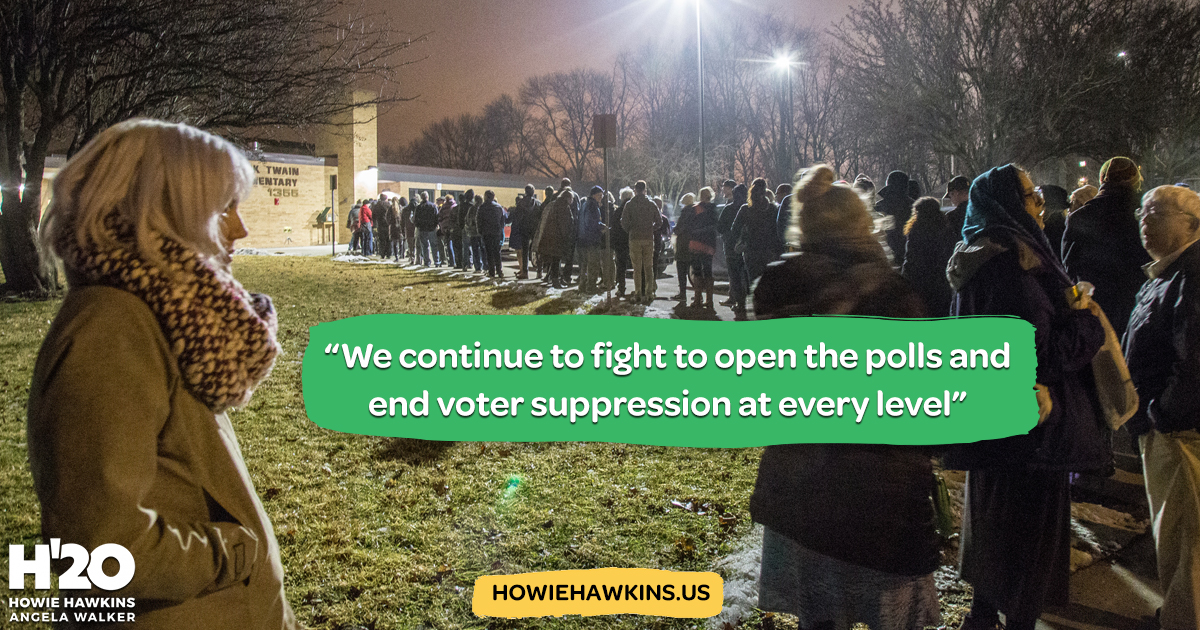 It's hard to overstate the effect of voter suppression. Every election, countless people are prevented from being able to cast their votes thanks to strict requirements, misinformation, and foul play.

As expected, we're seeing evidence of this foul play all over the country. There's no low that Trump's team won't stoop to which means it's up to all of us to stay alert and call out voter suppression when we see it.

A few key things to look out for (and what to do about them!):

Make sure that you have confirmed where your polling location is by checking a trustworthy online source for your area. (If the site's URL ends in .org or .gov, it's likely trustworthy!)

Get there early! Lines in polling locations all over the country have been painfully long and some people are reporting that they've been in line for over 10 hours. If you get there early, you have better chances of getting in and out quickly!

If you prefer to drop off your ballot, make sure that you are dropping it off at an official drop box. Just like checking for your local polling location, make sure that you're finding the drop box location using a
trustworthy site ending in .gov or .org.

There have been numerous reports of fake "official" ballot drop boxes being set up by Republicans. If you want your vote to be counted, make sure that you are using your county's actually-official drop-off location.

Requirements to vote are different from state to state.

You don't want to wait in a long line only to get to the front and learn that you don't have something that your state requires for you to be able to vote!

To see what your state requires for voting, click here.

Intimidation and Bullying
"Stand back and stand by"

Trump hasn't missed any opportunity to get his supporters riled up. Look out for signs of voter intimidation and don't fall for their tactics.

This includes spreading false information about voting requirements, aggressively questioning people about their voting eligibility or choices, pretending to be election officials, and harassment.

If you see these intimidation and "poll watching" tactics, take action.

These tactics have a long history of being used to suppress minority votes in attempts to illegally sway elections.

A phone call to the Election Protection Hotline (866-687-8683) will get you in touch with a trained election protection volunteer. If you are being threatened with violence, call 911.

It is so sad that we are still having to raise awareness of issues like this. Voting should be a process that is meant to be quick and easy so that everyone is able to exercise their democratic right to vote.

Instead, we see these same tactics (many of which have deep roots in Jim Crow) being used today to suppress voters and rig our elections.

From the very beginning, we have been outspoken critics of the rigged voting process and the blatant suppression that is taken as "normal" by people all over this country.

As we continue to fight to open the polls and end voter suppression at every level, we can only continue this mission with your help.

Your donation today is what helps us continue to take action against these tactics and a mainstream media that is attempting to disappear our campaign.

With an average donation of just $27, this campaign has beat the odds in state after state as we continue to push for a society that is free from inequality and a true Ecosocialist Green New Deal.

With 2 weeks left in the campaign season, it's down to the wire and we need your help now more than ever before.

Will you make a $27 donation TODAY to help us fight voter suppression and get our message out to the people who DESERVE a campaign that ACTUALLY fights FOR them?

Donate now (recommended $27) and join our cause to create sustainable and responsible change through an Ecosocialist Green New Deal!

We have a very aggressive goal of reaching at least 7 million people by phone before Election Day.  Can you help by signing up to make calls or texts?

Spread the word and encourage as many people as possible to sign up for emails from our campaign at HowieHawkins.us.