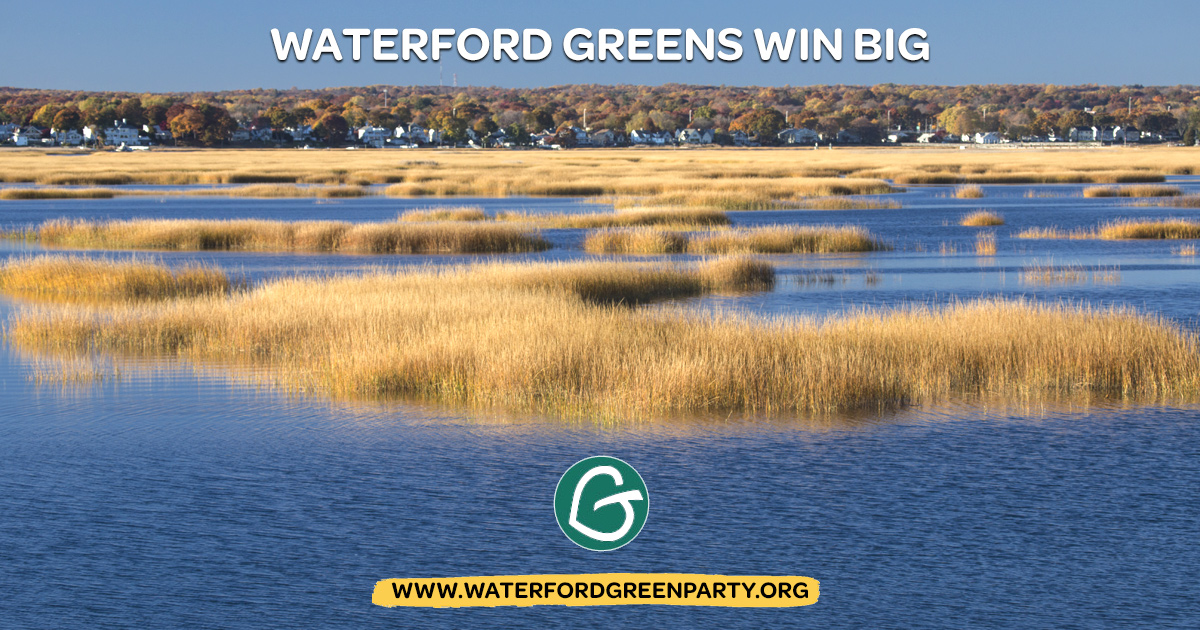 Waterford, CT – Waterford's 2017 municipal elections were highly contested, with over 50 candidates running on three different party lines. Newest to town is the Waterford Green Party, having been founded back in the fall of 2013. The Waterford Greens have been growing over the past several years, running their first candidate in 2014, and winning their first election in 2015. In the 2017 race they nearly doubled the size of their slate from 2015, endorsing a total of nine candidates.

Out of the three parties, the Greens were the group to exceed all expectations on Tuesday night. Green-endorsed candidates won seven out of nine races, winning four seats on the town's Representative Town Meeting, a position on the Board of Education, a seat on the Board of Assessment Appeals, and an alternate position on the Zoning Board of Appeals. In total, the Green-endorsed candidates now holds a total of 10 appointed and elected seats in the town government. Furthermore, the election results in Waterford set a Green Party record for the largest contingency of Greens to serve on a legislative assembly in New England. The previous record in New England was 6.7% in New Haven, CT from 2001-2003, according to the Green Party of the United States website.

Voter turnout was higher this year than it was in 2013 by several percentage points, much of which the Greens believe can be attributed to their presence on the ballot and the fierce campaign they ran. Five of the seven candidates running on the Green line were the highest vote-getter in their race as well, further demonstrating a strong mandate for the elected Greens. Green candidates that were top vote-getters include Deb Roselli Kelly (Board of Ed), Mike Buscetto III (Board of Assessment Appeals), Darcy Van Ness (Zoning Board Alternate), Andrew Frascarelli (RTM D1), and Joshua Steele Kelly (RTM D3). Only Carl D'Amato (RTM D4) and Baird Welch-Collins (RTM D2) won in a lesser place. While the Greens did work with the Democrats on the ballot, Welch-Collins is the first candidate to be elected as a Green alone in a contested race in Waterford.

This is a stunning victory for the Waterford Greens, considered to be a "minor party" by many, but the decisive victories proves that the people of the town want to see the government take a new direction and stay the course. The Waterford Greens were the only party in the town's election to publish a platform, which focused on governmental transparency, advancements in education, environmentalism, durable infrastructure, and improving the local economy. The Greens plan to do all of this and more, and hopes that the other members of the government are ready and willing to work towards such goals for Waterford.

Overall, the election was a hit to the town Republicans, who had previously held a wide majority on each board. The RTM is now at a 10-12 split, assuming the Greens will caucus with the Democratic Party, with Democrats and Greens holding a minority total of 10 seats on the 22 person legislature. The Board of Education also picked up more Democratic and Green-endorsed candidates than Republicans, and the board will now have a Democratic majority. The Greens are very much looking forward to putting forward new ideas in the town government, and are very appreciative that so many people came out to the polls this Election Day.