We're voting for Laura Wells for Congress & here’s why! 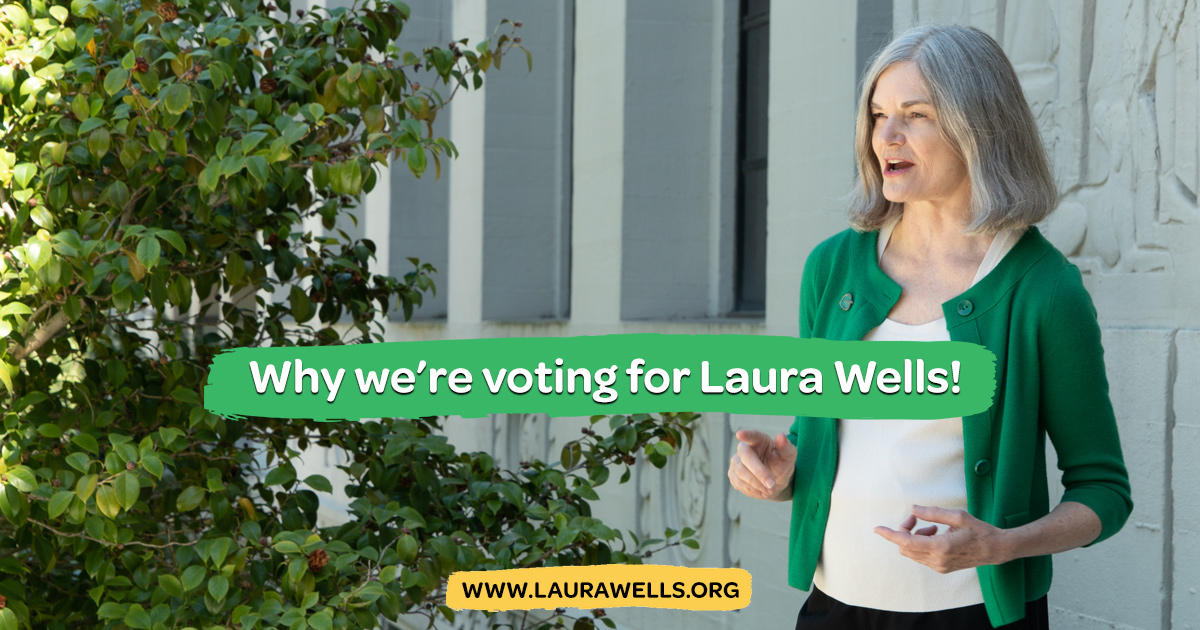 Pressure. Our votes are powerful, IF we use them to apply pressure toward the basics we need. The 1% controlling our country prefer that we don’t vote at all, or at least keep settling for the corrupt two-party system. Instead, we can pressure the system!

Here are some of the reasons why people are voting outside the status-quo box in 2018.

I want POSITIVE change, not the status-quo, and the Democratic Party plays a major role in maintaining the status quo in this country.

I want improved and expanded MEDICARE FOR ALL, not the “health insurance bailout” that Barack Obama, the Congressional Progressive Caucus (of which Barbara Lee was a chair), and Jerry Brown served up.

I want PUBLIC BANKS, not Wall Street Banks breaking our personal and municipal budgets after decades of bipartisan de-regulation.

I want Palestinians - and Israel - to live in PEACE. I am voting for Laura Wells for Congress, because she has pledged to NOT support Israel’s broken agreements with billions of hard-earned U.S. tax dollars, which are used to kill Palestinians and steal their land.

I am RAISING MY EXPECTATIONS.

I will vote for someone who is more LEFT than even progressive Democrats, with none of the “lesser-evil” fear the two-party system has tried to plant in me. I support candidates who fight for social and environmental justice and who refuse to take corporate donations.

I want everyone to have HOUSING; it is totally possible when we tax the rich the way they used to be taxed, and stop the wars.

I want a government that provides free college and trade school EDUCATION, and free high quality public education across the board for kids and adults. There’s no excuse for having our young people start out in debt.

I want JUSTICE, and I want the senseless killings by police to stop.

I am tired of the PARTY BOSSES, both Democrats who disappoint me and Republicans who repel me.

I’m voting for Laura Wells to contribute to the growth of the Green Party which is CORPORATE-FREE and represents human values; I am no longer voting for candidates who take corporate money and then tell me they’re fighting for me.

I am done with Democrats and Republicans TRADING OFF EVERY FOUR YEARS, and every four years making things worse for kids and communities no matter which party is in power.

I am also done with the campaign pitch being, “WE’RE BETTER THAN THEM.” Besides, there is no “them” in this race.

I reject the phrase “reaching across the aisle” when THERE IS NO AISLE IN WASHINGTON when it comes to wars and benefits to corporations. The aisle is between Washington and the rest of the country. I want my vote to matter, and to push the discourse to the left.

I do not want to hear Democratic Party EXCUSES, blaming everyone and everything except its own poor policies — and corporate funding— for its lost votes.

I WILL VOTE for candidates the 1% labels as “can’t win,” which is the same as saying people can’t win. Candidates CAN WIN when everyone who would be helped by them, votes for them.

I like you Barbara Lee, and I am voting for Laura Wells.

Because another world IS possible,
Laura