Close the camps: Solidarity with participants of direct action against GEO in Aurora 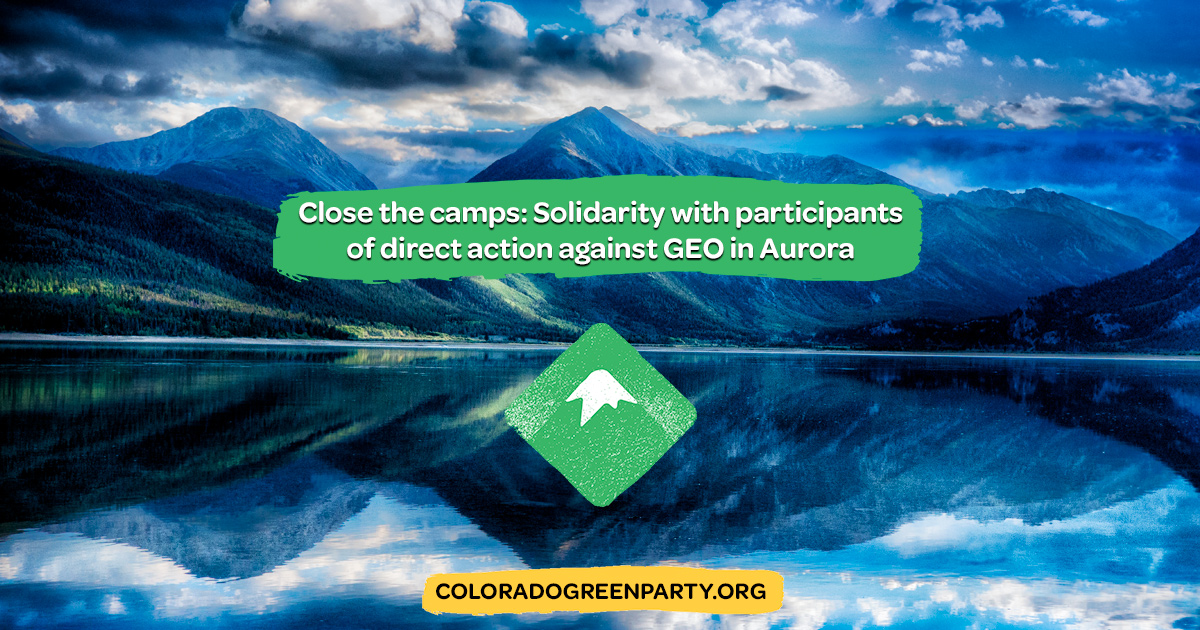 DENVER – The Green Party of Colorado (GPCO) expresses its solidarity with the radicals and leftists that staged a march and direct action against a privately-owned immigrant detention center in Aurora, CO, on July 12, 2019. This action was led by a coalition of immigrant justice activists, including the International Socialist Collective – Boulder, UCB and some of our own Green members. We are proud to point out that our state council endorsed the action in a unanimous vote.

Many media reports have surfaced, asserting that the actions we endorsed resulted in violent outbursts that purportedly jeopardized the safety of attendees of the concurrent vigil held by Lights for Liberty near the GEO-owned detention center in Aurora, CO, while removing the flags of the United States and Colorado and replacing them with a Mexican and other flags.

GPCO reminds the public that burning the flag is still protected speech under the First Amendment of the U.S. Constitution, which has been upheld by the Supreme Court in the cases Texas v. Johnson (1989) and U.S. vs. Eichman (1990).

It is essential that we develop effective alternatives to society’s current patterns of violence. We will work to demilitarize and eliminate weapons of mass destruction, without being naive about the intentions of other governments. We recognize the need for self-defense and the defense of others who are in danger. We promote non-violent methods to oppose practices and policies with which we disagree, and will guide our actions toward lasting personal, community and global peace.

While some are attempting to characterize the flag burning action as “violent,” we instead see the action as a non-violent expression of resistance to the proliferation of concentration camps that cause misery to human beings fleeing the horrors that our government has propagated in our name and with our dime. We reject the notion that the protesters jeopardized the safety of undocumented attendees of the event, and we note that if the organizers of the vigil had declined to seek a parade permit, the undocumented participants would not have had to face the very instrument of state power that threatens their safety on a daily basis.

GPCO members point out that the Aurora Police Department was one of the organizations that endorsed Donald Trump’s presidential campaign, the very person that is escalating the already inhumane treatment of asylum seekers initiated by President Clinton and fortified by presidents Bush and Obama. We regard such a shift in focus to be akin to blaming the very victims of state brutality and terror and punishing them for their human right to object to the material conditions that oppress them. Further, we feel that introducing that exposure, given the very reactionary views that many police officers reportedly hold, was the real escalation of danger for vulnerable people present. We question whether these vulnerable attendees ever gave consent to undergo exposure to such a risk.

The Green Party accepts as a goal a world in which people can freely choose to live in and work in any country they desire. We assert that migration is a human right. We demand the immediate closure of all migrant and refugee concentration camps, as well as the immediate reunification of all children with their asylum-seeking parents and/or caregivers. Finally, we demand an end to the militarization of our communities and of the colonial borders of the United States, the dismantling of the carceral state and the end of the capitalist system that imprisons the world’s working class and pits us against each other.