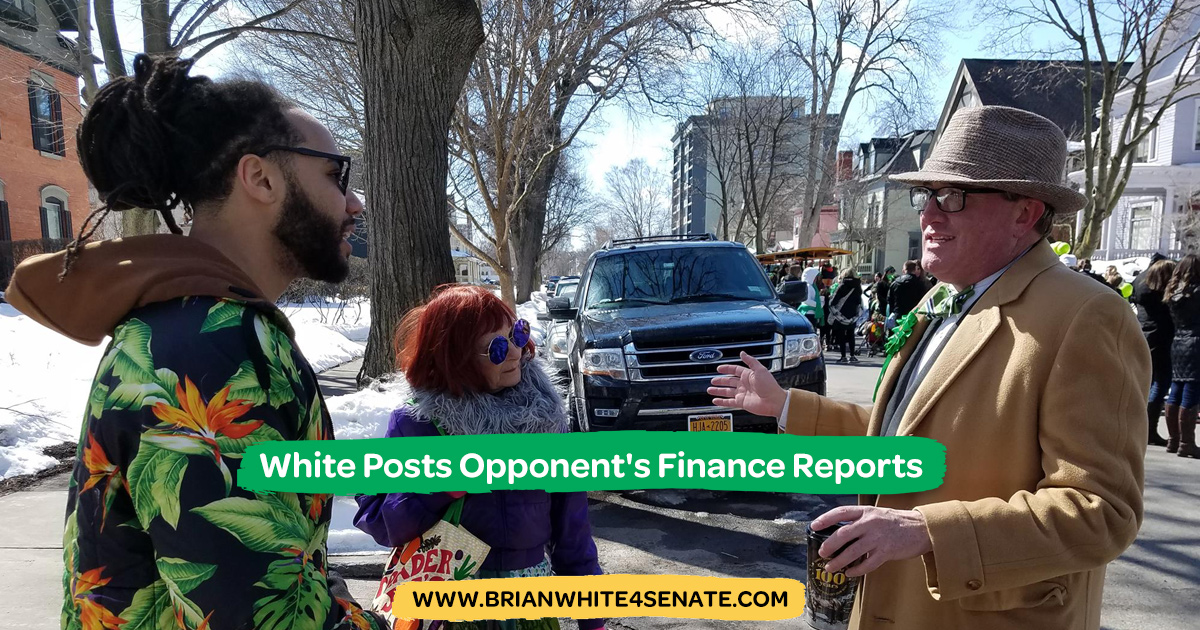 (Rochester, NY) -- To go along with his recently released platform plank on electoral reform, candidate for State Senate, Brain White posted the last 2 years of campaign finance reports filed by the incumbent in the 55th district, Rich Funke. The links for both the platform plank and Funke's finance reports can be found below.

Brian White says that these financial reports are not shocking. "Senator Funke is no different than anyone else in office from the two major parties. You get into office and the parties put pressure on you to play the game – to take contributions from developers, law firms, and other entities that profit from the government. There doesn't have to be written agreements between the politicians and the corporate contributors. They give money, they get things from the government. That's not how government is supposed to work or even be perceived to work."

White's solutions to issues in campaign finance as well as improving voting overall in New York State can be found at http://www.BrianWhite4Senate.com/electoral. Among the ideas include the public financing of all elections, ranked choice voting, and the end of gerrymandering. If adopted,

White's ideas would effectively end the unfortunate decisions by the Supreme Court that asserted that money is the same as speech and that corporations have the same rights as humans. "The only people who agree with these decisions are those who financially benefit from it," according to White's campaign manager, David Sutliff-Atias. "There's no incentive for those in power to do anything about this so the change is going to have to come from a third party. Brian White and the Green Party do not take corporate donations therefore are poised to be a significant part of the solution."

To view Senator Funke's campaign reports, voters can bypass trying to navigate the New York State Board of Elections website by going to http://www.brianwhite4senate.com/corporate. The files there were downloaded directly from the State's website.