Why our voices shake with rage 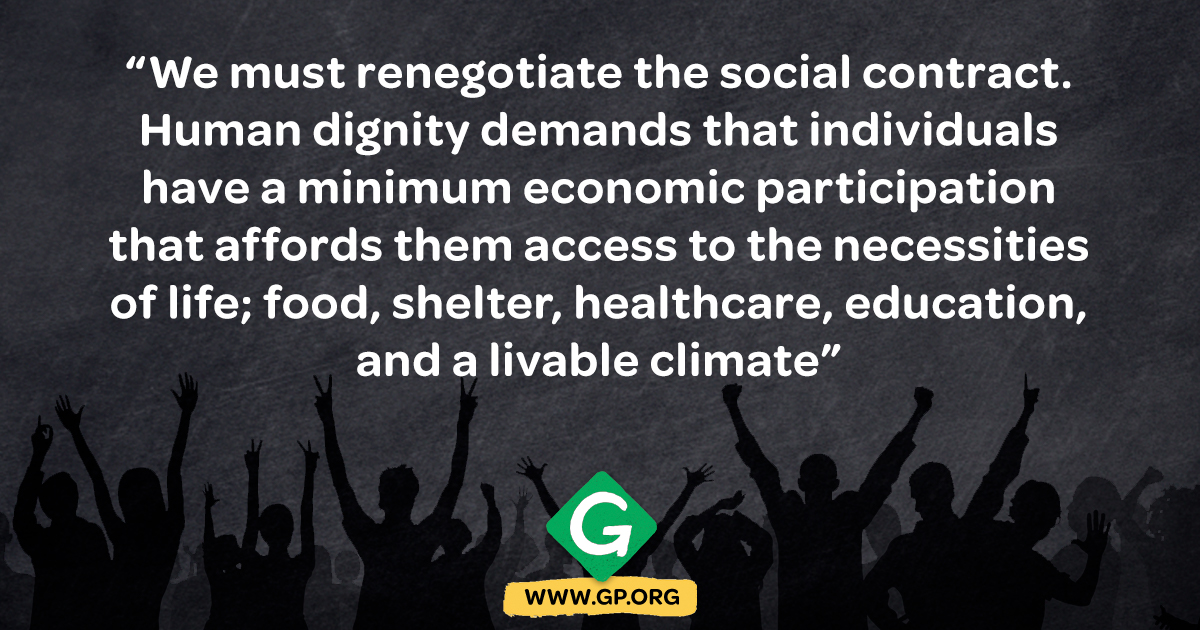 Most people can probably understand why Greens are outraged at having our sandcastle kicked over; our candidates selectively struck from the ballot at the last minute by pernicious legal attacks. We think it's pretty clear that there is a question of equal treatment and application of the law here, but we are not surprised. For Greens, the obstacles to ballot access are just one more in a long list of duopoly tactics to suppress minor parties and retain total oligarchic control of our nation.

We are experiencing so many simultaneous public crises that it becomes difficult to list them all. The looming, heartbreaking, & terrifying eviction crisis soon to visit tens of millions of people & exacerbating homelessness; the similarly heartbreaking plague of police brutality and a culture that allows it; not only the pandemic, but the long-standing healthcare crisis; the crushing economic crisis caused in very large part by short-sighted leadership; the existential crisis of navigating climate transition; and the pathetic breakdown of our looted and neglected public infrastructure: all of these things lay at the feet of the misguided philosophy of privatization and the excessive prioritization of capital interest inherent in our current form of capitalism.

Green voices, long derided in the public domain, have consistently sought to promote the public interest in their limited capacities. In eras past, when our society implemented socialist ideas like fire departments and schools, there seemed to be at least some rapprochement between the public or social interest, socialism, and capitalism. But in recent eras, the term socialism has been so maligned that our society seems incapable of thinking clearly about the two perspectives anymore. Greens are trying to bring forward considerations in the public interest. We believe it is short-sighted of the oligarchic duopoly establishment to continually suppress our attempts at constructive contribution in the political arena, the only outlet constitutionally provided to the public.

There is an undeniable combined impact of institutional prejudices against minor parties, media biases and exclusion of minor parties from debates and coverage, and a fundamental classism that causes Greens to be quickly dismissed as unimportant or not serious. Perhaps even because, once we do get one brief moment to speak about all these issues, our thoughts may be jumbled and our voices may shake with rage. Lack of slick branding and marketing resources leaves a consumer-trained public ready to dismiss the Greens because of their shabby shoes, and when the media tells them to do so, the classist TV-world bias is confirmed.

Never mind that REVOLUTIONARY pressures have built up because the public's needs are not being addressed, the oligarchy is busy having us chase dollars over a cliff to our doom. They are so isolated from the plight of the average people, that they do not conceive of the enormous danger we are in. Normal people were already stretched to the breaking point before this pandemic. The desperation about to be unleashed now as people have no means of support and are evicted with no social safety net, automation increasingly replacing laborers, combined with climate displacement, could very well topple this nation the major parties say they want to make great.

People love their communities, their families & children, their friends, and their neighbors. I believe in our hearts, people want to heal as one humanity. They don't want to be taxed and invest incomprehensible sums in killing other humans via the military industrial complex. They don't really want to riot, destroy, loot, damage, or otherwise injure their homes. But if they are cast aside with nothing and ignored to die, watching their children suffer; rioting is the language of the unheard.

People work to the absolute breaking point; scrambling, hustling and trying again with multiple jobs in a gig economy, and internalizing the idea that their failures are entirely their fault. Is it any wonder that we also have mental health, drug, & suicide crises? The duopoly oligarchy is metaphorically putting duct tape over a high pressure valve that is going to EXPLODE, just so they can keep the money machine running. The bipartisan-created crisis of the USPS was apparent far in advance, but our pathetic leadership is so short-sighted that we teeter on the edge of being an unquestionably failed state, unable to even reasonably facilitate an election during the public health crisis.

I believe we must renegotiate the social contract. Human dignity demands that individuals have a minimum economic participation that affords them access to the necessities of life; food, shelter, healthcare, education, and a livable climate. To deny the necessities of life unless an individual sells their time to someone with capital, is to hold the population in wage slavery, denying their access to the commons which has been privatized. Greens believe that through cooperation, we can make enough for everyone. We believe in non-violence, and the de-legitimization of government violence. We believe it is never too late to try to correct society's course in the public interest.

Let's work together to build the future our children deserve.