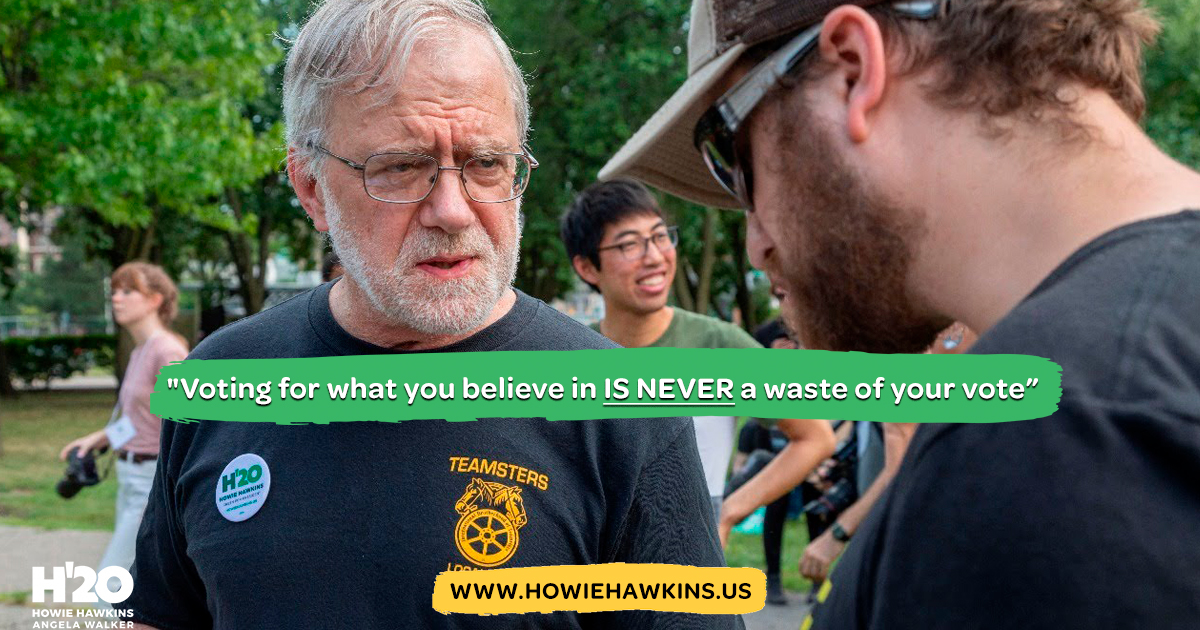 I don’t care what you learned in Social Studies class, voting will not solve all of our problems. It is one tool to use to create systemic change. But those who say that voting doesn’t matter are wrong as well. It can make a difference, but only if you actually vote for the person you most agree with and not against the person you least agree with; no matter what party they are in, period.

This is the key thing. Voting for what you believe in is keeping in line with all of your activism, your ideals, and your values. If you feel bad after voting, you’re not doing it right.

If Howie Hawkins doesn’t have a chance of winning, doesn’t that mean I’m throwing away my vote?

In the next post, I’m going to explain how Howie Hawkins can actually win the election. I know, you don’t believe it. So let’s say that I agree with the premise that the Green candidate has absolutely no chance to win. So what does your vote for Howie Hawkins do?

Not many people know how political parties come into existence. It’s actually a state-by-state thing. Where I live, in New York, it used to be that you get a candidate on the ballot for Governor as an independent (which is very difficult) and your candidate gets 50,000 votes and that “party” has ballot status for the next 4 years until the next gubernatorial election. Then the party’s candidate has to get 50,000 votes and they get another 4 years and so on. (As an aside, Howie has been the Green’s candidate the last 3 times and has gotten us ballot status each time.)

And what’s the big deal about having ballot status? For a local Green candidate (such as myself), It’s the difference between needing 50 petition signatures and 2000 signatures to run for local office. If you have never run for office, you don't know how huge this is. I don’t know the exact number of states where votes for a Presidential candidate determines ballot status, but I know it’s over half. And just this year, New York State joined that list.

Yep. In another instance of Democrats attacking the Green Party, Governor Andrew Cuomo more than doubled the number of votes needed to maintain ballot status AND included votes for President in the mix. So now a party’s ballot status in New York is up every 2 years instead of 4. How’s that for democracy?

SO… in New York, as well as in dozens of other states, your vote for Howie Hawkins for President means Greens can run for City Council, Town Board, Highway Supervisor, etc. That’s significant. Here’s an explanation of Ballot Access (status) with a list of some states’ requirements.

But wait, that’s not all!

There’s a Federal law that any party that gets 5% of the vote qualifies for Federal money for that party. The Green Party does not take corporate donations. That additional money will help future Green candidates for Federal office: Congress, Senate, etc. That is a giant boost in getting over the already enormous barriers put in place by the two corporate parties. So your vote for Howie Hawkins helps other candidates who are fighting for the things you care about like Black lives, single-payer health care, stopping climate change and more.

Yes. Many people don’t hear about the Green Party because when we have candidates run for office, at all levels, we are left out of polls, debates, media stories, and the like. A higher vote total will give us more visibility. It will get our candidate included in actual public discussion. We will become “viable” even though viability shouldn’t matter when you decide whom to vote for.

More and more people say we need an alternative to the two corporate parties. We have them – you just won’t vote for them even when you agree with them. They’re not “viable” because you won’t overthrow the system with your vote. The people in power are not going to reform themselves out of power. So as long as you fall for this viability myth you perpetuate this self-fulfilling prophecy.

But won’t my vote for Howie Hawkins keep Trump in office?

You haven’t read my previous post. Go there now.

To sum up, when you vote for Howie Hawkins: