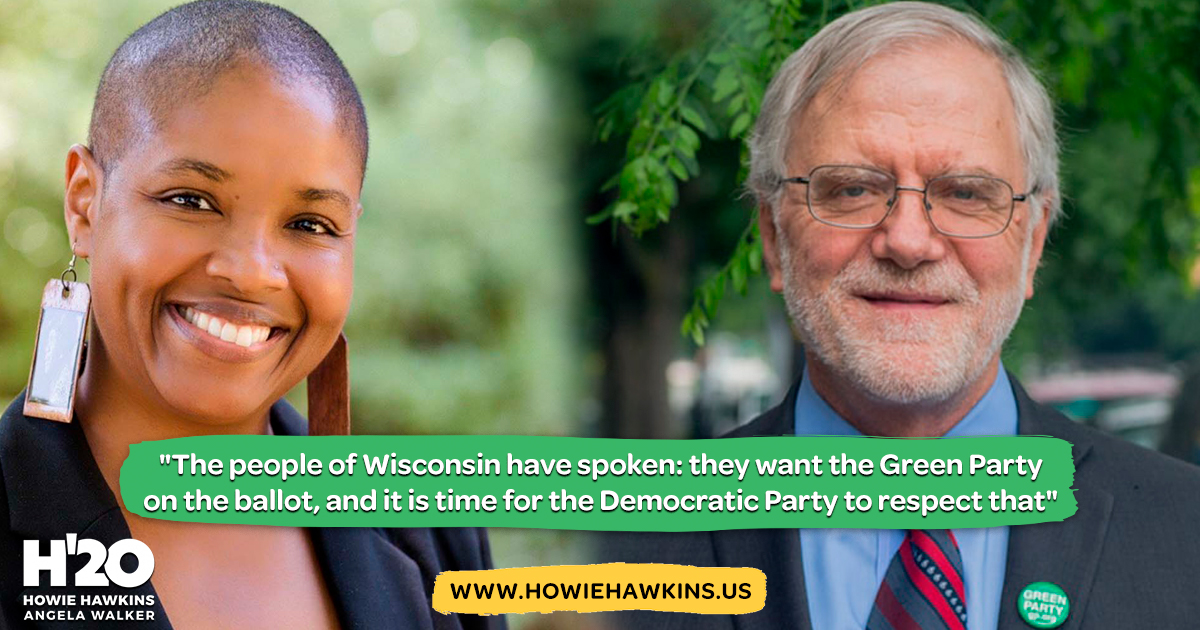 SYRACUSE, NY –  The ongoing struggle to give voters more choices continues. Yesterday, the Wisconsin Elections Commission in a partisan 3-3 vote refused to put the Green Party presidential ticket of Howie Hawkins and Angela Walker on the ballot.

The Hawkins/Walker campaign promised to file suit to give voters a choice. "Thousands of voters in Wisconsin signed petitions to put us on the ballot. The Democratic Commission members have committed a crime against democracy by suppressing voter choice. If there is any justice left in Wisconsin, the judge will put us on the ballot," said Howie Hawkins, the Green Party presidential nominee.

"Party suppression is a form of voter suppression. Ballot access laws are used to limit voters' choices to two candidates from the corporate-financed parties and keep candidates that do not take corporate money off the ballot," said Howie Hawkins. "Our campaign supports improved Medicare for all and the Green New Deal -- these were phrases that no one who spoke at the Democratic Convention even uttered. Joe Biden opposes them. Yet more than 85% of Democrats support these policies. The Democrats do not want competition from a ticket with a popular platform because they want to be able to take progressive voters for granted."

Andrea Mérida, the Hawkins/Walker campaign manager who argued the case before the Commission, said, "Yesterday's hearing was a demonstration of how deeply political bigotry has taken hold among the Democrats on the Commission. The campaign disclosed Angela Walker's change of address within the same city of Florence, South Carolina during the petitioning period, and we followed Commission staff's procedural instructions to the letter, even when they lurched between three different sets of instructions over two days."

The Wisconsin Elections Commission will only count 4,000 signatures so even though the Hawkins/Walker campaign has an additional 2,000 signatures, they were not considered by the Commission.

Mérida described the unfairness of the hearing saying, "The chair of the Commission showed a stunning lack of due process by not allowing us to introduce evidence to refute the cherry-picked staff analysis. It's time for that six-member, bipartisan commission to be expanded to include independents and third party members. If there was ever a demonstration of the need for proportional representation, this is it."

Walker, a native of Milwaukee, Wisconsin. said, "The people of Wisconsin have spoken: they want the Green Party on the ballot. They want a choice, and it is time for the Democratic Party to respect that. At a time of heightened dissatisfaction with the two-party system, the Democrats are not doing themselves any favors in denying the opportunity for real democracy to an electorate that is demanding it."