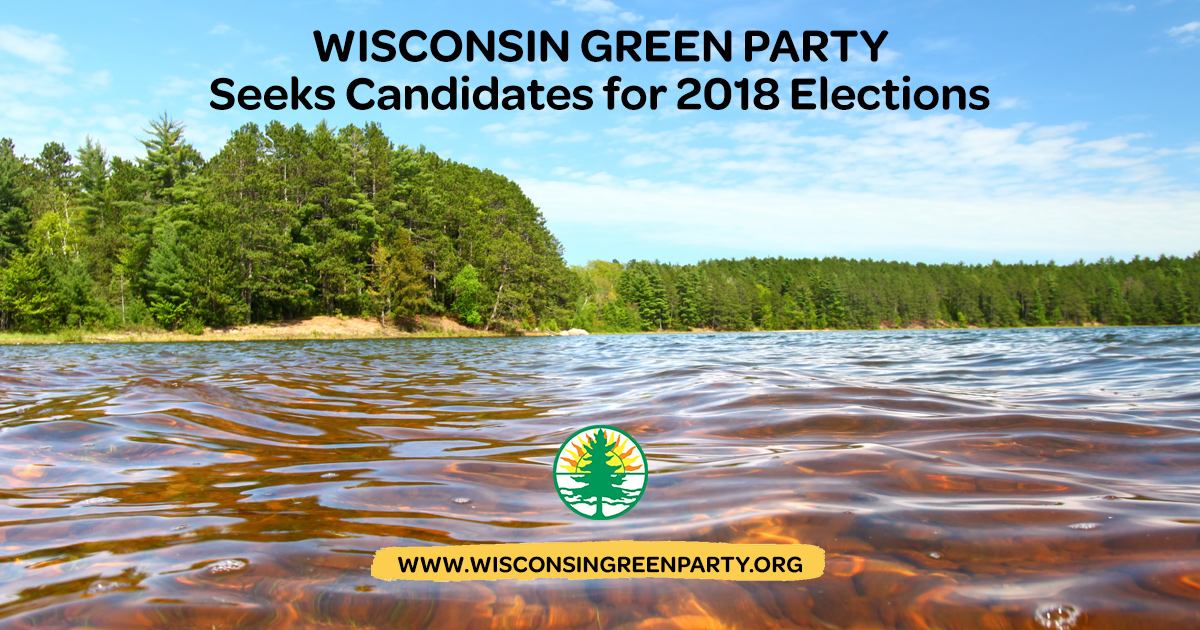 Have you thought about running for office?

Even if you haven't, consider the following: Americans have never been closer to rebellion against the political establishment. National polls show that a record high 61% of Americans - including 71% of millennials - agree that the establishment parties are failing us, and that we need a new major party. With elections coming up, now is a great time to think about running for office as a Wisconsin Green to help build the movement for people, planet and peace over profit.

If you're considering running for office, let us know and we'll get in touch to discuss the possibilities!

Don't worry if you don't have campaign experience - we will be holding a Green Campaign Training School on April 7th in Milwaukee for prospective candidates, campaign managers, and anyone who would like to gain the skills and knowledge needed to be an essential part of a successful campaign.

The need has never been greater for real solutions to the urgent problems in our communities and our world, many of which are boiling over into full-blown crises.

The establishment parties are moving us in the wrong direction. Neither corporate-funded party is demonstrating the values and vision we need to revolutionize American politics.

There's never been a better time for people of integrity to join together and build the new major party our country so desperately needs. The Green Party can seize this moment to bring about the transformation we need at every level: in our local, state, and federal governments, our economy, our society, and our relationship with the Earth we depend on.

The Greens are the only national party with a consistent stand against corporate money in politics, and a platform that could unite millions in a new populist progressive movement. In today's political climate, a rising party that empowers regular people to run for office to fight for the people - not lobbyists or corporate PACs - has the potential to catch fire.

But political movements don't build themselves. We need candidates who are willing to stand up and carry the Green banner. Win or lose, every Green campaign plants the seeds of future victory, by bringing Green values into the mainstream, challenging establishment politicians to answer for their failures, and recruiting new members into the movement - including future candidates and elected officials.

At the local level, Greens in Wisconsin have won over 50% of the races they've entered. Running more candidates at all levels will not only make a difference in our communities, it will also help build the critical mass we need to win higher office and turn our values of peace, justice, democracy and ecology into reality.

A shocking number of elections go uncontested, which means even more opportunities for concerned citizens to make an impact.

We are particularly eager to recruit candidates to run for Secretary of State and State Treasurer. In past years, strong showings in these races have helped the Wisconsin Green Party to maintain ballot access and party status.

If you're willing to consider running for office to build the movement for people, planet, and peace, the Wisconsin Greens want to talk with you!

Let us know if you're considering a run for office and we'll get in touch about the next steps.

The Wisconsin Green Party will decide what candidates we will endorse at our Spring Gathering state membership meeting in Stevens Point on April 14. The period for gathering signatures to get on the ballot begins April 15.

Building a bridge to the better world we know is possible begins whenever you're ready!