You're a Green (And You Never Even Knew) 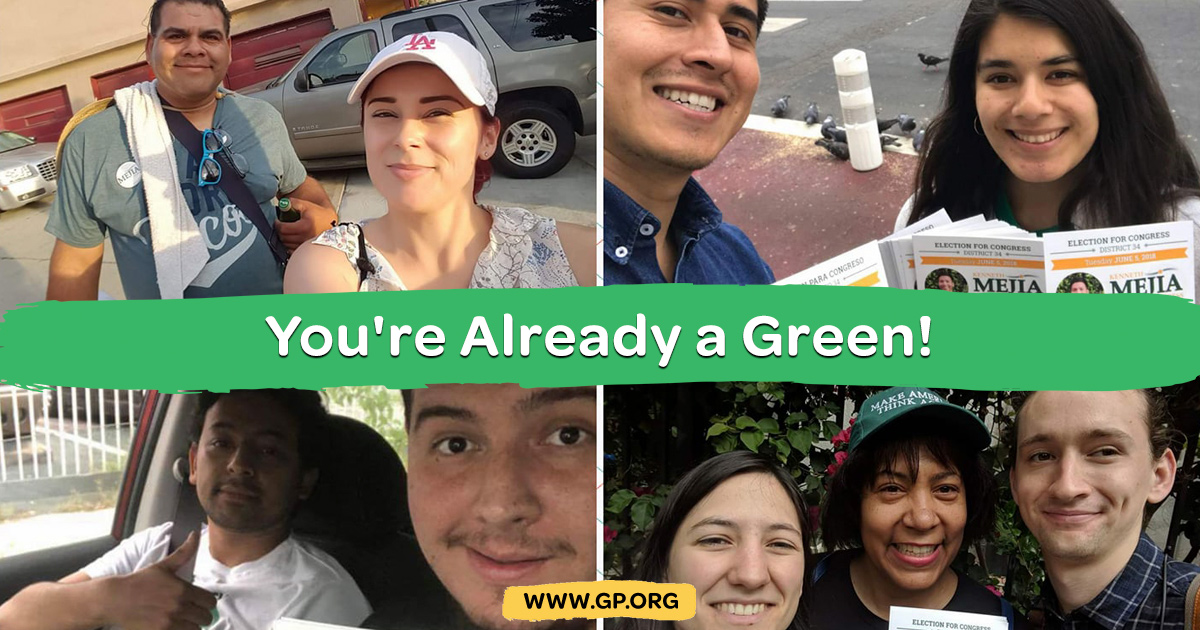 You may not know this from mainstream media coverage, but the Green Party is overwhelmingly popular among us Millennials. 71% of Millennials think we need a third party, and not just any third party will do. We want a party that fights for universal healthcare coverage, marijuana legalization, strong action on climate change, and more equitable economic outcomes. We believe the government should provide more services and want the country to be more welcoming to immigrants. Republicans reject all of these priorities, and Libertarians most of them. Democrats, at best, merely talk about implementing them while catering to the same business interests as the other two. The Green Party is the only national party that fights for all of these issues, all of the time. And we do so without a penny in corporate money. We are a Green generation!

Young Greens run every year across the country and hold meaningful positions at the table within the party. Earlier this month, Kenneth Mejia, 27, won over a quarter of the vote in his run for Congress in Los Angeles. Rodolfo Cortes Barragan, 30, won over 22% of the vote in his race in California's 40th district. Those are astounding numbers for candidates going up against entrenched Democrats! Within the party, we have a Young Greens caucus where we can express concerns that impact us. Many of us are saddled with burdensome college debt, while others cannot afford to attend higher education. We are the only national party to propose eliminating college debt and make higher education tuition-free.

Our platform demands respect for the rights of youth - to be free from abuse, to have a quality education, and more. In my own experience, I found the Green Party to be welcoming and supportive. I joined the Green Party of Virginia in 2017 and am now the Press Secretary for the state party as well as a delegate to the National Media Committee. Everyone in the party whom I have met has respected me for the work that I put in.

To get involved, join a local near you! We are also active on college campuses across the country. At Virginia Tech, for instance, we have the Greens at VT which I have the privilege of chairing. For the past two years, we have promoted the Four Pillars on campus and off. Our top goal is stopping the Mountain Valley Pipeline which cuts just a few miles north of campus and threatens the watershed that supplies the university's drinking water. We are also working to convince the university to divest from fossil fuels - presently nearly 10% of the university's endowment is directed to fossil fuel companies. Climate change is a huge issue that impacts all of us, and will continue to do so for the foreseeable future. These goals are just a few small steps we are taking locally to improve lives globally.