100th Anniversary of the 19th Amendment 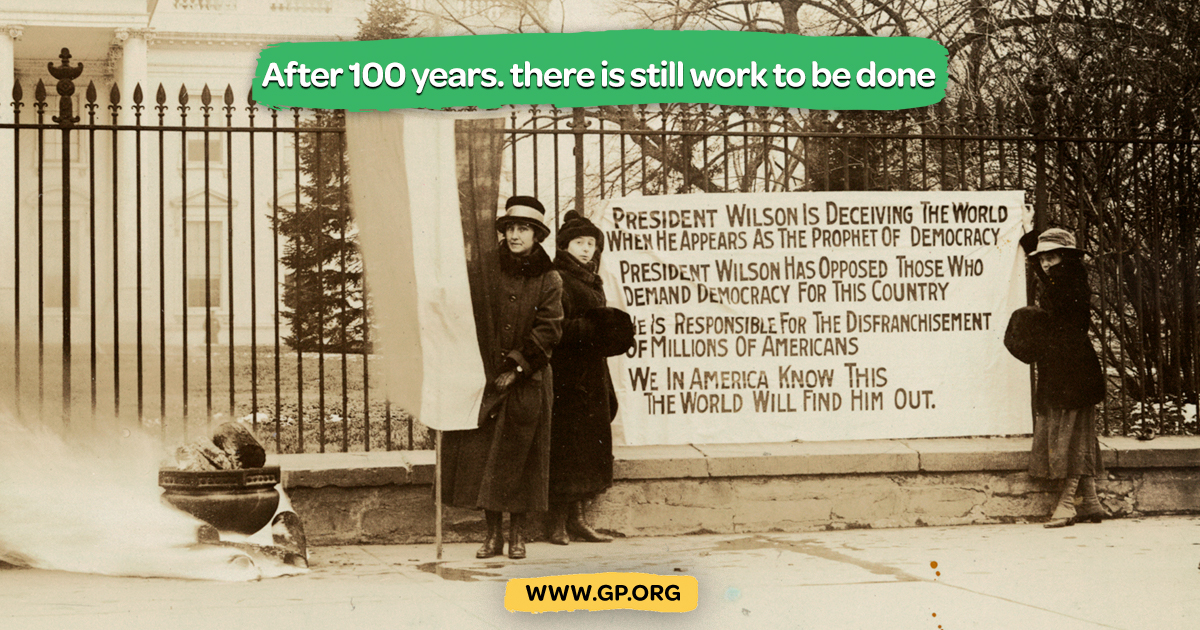 August 26th marked the centennial anniversary of the federal government ratifying the 19th amendment, granting women the right to vote. Even as we celebrate that hard-fought victory, however, we must remember many women were not able to exercise that right because of a pernicious web of laws and regulations designed to disenfranchise voters based on race and country of origin.

A series of reforms through the following decades gradually expanded the right to vote to citizens of all races and nationalities, culminating in the Voting Rights Act of 1965.

With our foundational commitment to the pillars of Grassroots Democracy and Social Justice, the Green Party has always fought for more just participation and representation for all people. Please give to the Green Party today so we can keep winning victories in this multi-generational struggle, which is actively obscured by the Parties of War and Wall Street and their mouthpieces in the media. Your gift today will help us run candidates and win victories to ensure more people can vote while fighting to ensure people’s votes mean more through transformative reforms like Ranked Choice Voting, Proportional Representation and Fully-Public Campaign Finance.

Even today, many are still denied their full right to vote. For example, people living in U.S. colonies cannot vote in U.S. presidential elections, and part of the Voting Rights Act was struck down by the Supreme Court in 2013. Countless more voters are mired in an archaic, plurality-take-all election system with gerrymandered districts designed to silence voters as much as possible.

Women are running for political office and winning in record numbers. As Greens, we are proud to support our women candidates running for local, state and national office on our ballot line this year.

Women elected officials are more likely to promote policies that invest in education and health and more likely to pass and implement legislation supporting gender equity.

Countries led by women are 5 times less likely to use violence to resolve international crises and less likely to wage war on their own population or abuse human rights.

Women leaders of 7 countries with low rates of COVID-19 have recently been highlighted as managing the crisis better than their male counterparts in 7 other countries with high rates of the disease.

However, many states are threatening our right to run Green candidates, with onerous and unreasonable ballot restrictions and exploiting COVID-19 social distancing and shelter-in-place guidelines to prevent us from gathering petition signatures.

We can overcome today’s forms of disenfranchisement, but only with your help. Can you donate $100 now to celebrate this month's centennial anniversary and continue to support women running for office?

Thank you for celebrating with us.

P.S. A mountain of evidence shows Ranked Choice Voting and Proportional Representation elects more equitable and diverse governments along the lines of gender, ethnicity and other dimensions of historical repression.

Become a Green Party monthly sustainer today so we can win RCV and PR across this country and ensure 100 more years of expanded Voting Justice. Grassroots, multi-party democracy is necessary to winning Real Solutions That Can’t Wait!

Masthead photograph courtesy of the Library of Congress