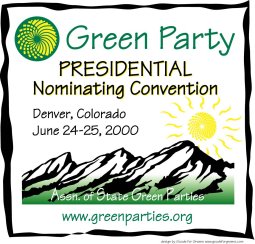 Jim Hightower was keynote speaker at the convention. Other speakers included: Manning Marable, Helen Caldicott, John Anderson, Jello Biafra, Ann Northrop and Medea Benjamin. The convention was attended by over 300 voting delegates from 39 states. Over 1200 people attended the final nominating event. Also attending were representatives from 15 foreign Green Parties as well as Green Party Federations of the Americas, Europe and AFRICA.

Ralph Nader and Winona LaDuke were nominated with 92% of the vote, with the remainder being split evenly between Jello Biafra and Stephen Gaskin. The convention delegates also approved the convention platform that Nader and LaDuke ran on.

The convention was a big success in bringing the Green Party message to millions of Americans who had never heard of it and demonstrated that the Green Party is the serious alternative to the two-party duopoly.

Speakers encouraged their fellow Green party members to fight for their beliefs this election season. They emphasized the progress being made across the country in their fight for a more environmentally sound, less corporate driven America.

Professor Marable called for the development of a just and humane society in the 21st century. He insisted that the Green Party must be courageous in the face of established political power in order to facilitate change in America. Crises of structural racism, economic inequality, incarceration, and public education pose a daunting task for America.

Green Party members and delegates gathered to nominate their presidential candidate, Ralph Nader, a long-time consumer rights advocate. Key issues in the party platform include more environmental awareness, nonviolence, community-based and more democratic economics and respect for diversity. In his acceptance speech, he spoke about the need for action by ordinary citizens to retake control of the U.S. political and economic systems. He also criticized both major parties for helping businesses control U.S. society rather than allowing the people to rule in the true sense of democracy, and for not allowing major third party candidates to be involved in the presidential debates.

Ms. Northrop talked about the high ideals that the Green Party should hold, but cautioned against being sure one has the answers all the time. She also raised issues related to sexuality.

Mr. Nader and Mr. Hoffa spoke to reporters about Mr. Nader's campaign for the Green Party's presidential nomination. While Mr. Hoffa did not specifically endorse Mr. Nader, he said that he supported Mr. Nader's views on international trade and his labor policies. After their remarks they answered questions from the reporters.