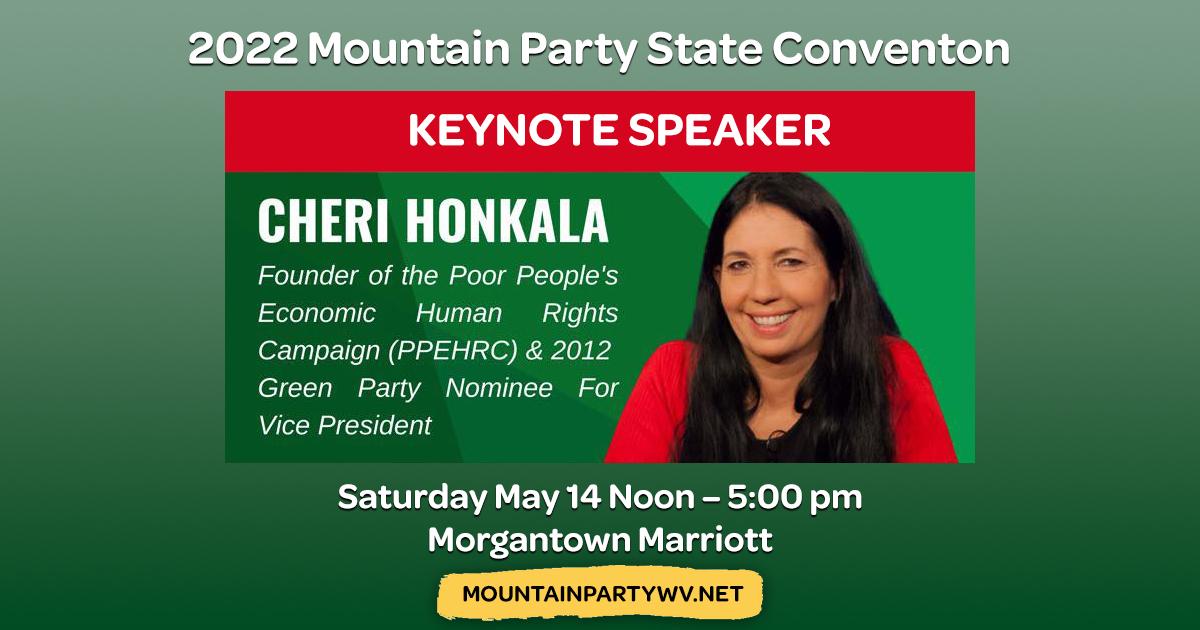 SALEM, WV – The Mountain Party of West Virginia is happy to announce Cheri Honkala as our keynote speaker for our 2022 state convention!

Cheri Honkala is a nationally and internationally recognized anti-poverty and human rights advocate. For the past 25 years she has dedicated her life to creating a movement led by the poor, not their advocates. Honkala has organized numerous protests, holding marches, demonstrations and setting up tent cities, in the course of which activities she has been arrested for civil disobedience violations more than 200 times.

In her early years, while still living in Minnesota, she formed the Twin Cities anti-poverty groups "Women, Work and Welfare" and "Up and Out of Poverty Now.” Currently based in Philadelphia, she has devoted most of her attention to the rise in home evictions among lower income families. She is the co-founder of the Kensington Welfare Rights Union (KWRU), which later turned into the Poor People's Economic Human Rights Campaign (PPEHRC). PPEHRC’s organizational mission states:

"The Poor People's Economic Human Rights Campaign is committed to uniting the poor across color lines as the leadership base for a broad movement to abolish poverty. We work to accomplish this through advancing economic human rights as named in the universal declaration of human rights — such as the rights to food, housing, health, education, communication and a living wage job."

Honkala has received recognition in numerous publications for her role in bringing attention to issues such as homelessness and home foreclosures, and has been called "the protester's protester.” She was included in Philadelphia Magazine’s list of 100 Most Powerful Philadelphians and was named Philadelphia Weekly’s “Woman of the Year” in 1997. In 2001, Ms. Magazine also named Honkala “Woman of the Year.” She as since been the recipient of numerous awards including the Bread and Roses Human Rights Award, Public Citizen of the Year by the Pennsylvania Association of Social Workers, and the prestigious Letelier-Moffitt award from the Washington Institute for Policy Studies. In April 2005, Mother Jones magazine named her Hellraiser of the Month. Front Line Defenders has named Cheri one of the 12 most endangered activists in America. She was also featured prominently in the 1997 book Myth of the Welfare Queen by Pultzer-Prize-winning journalist David Zucchino.