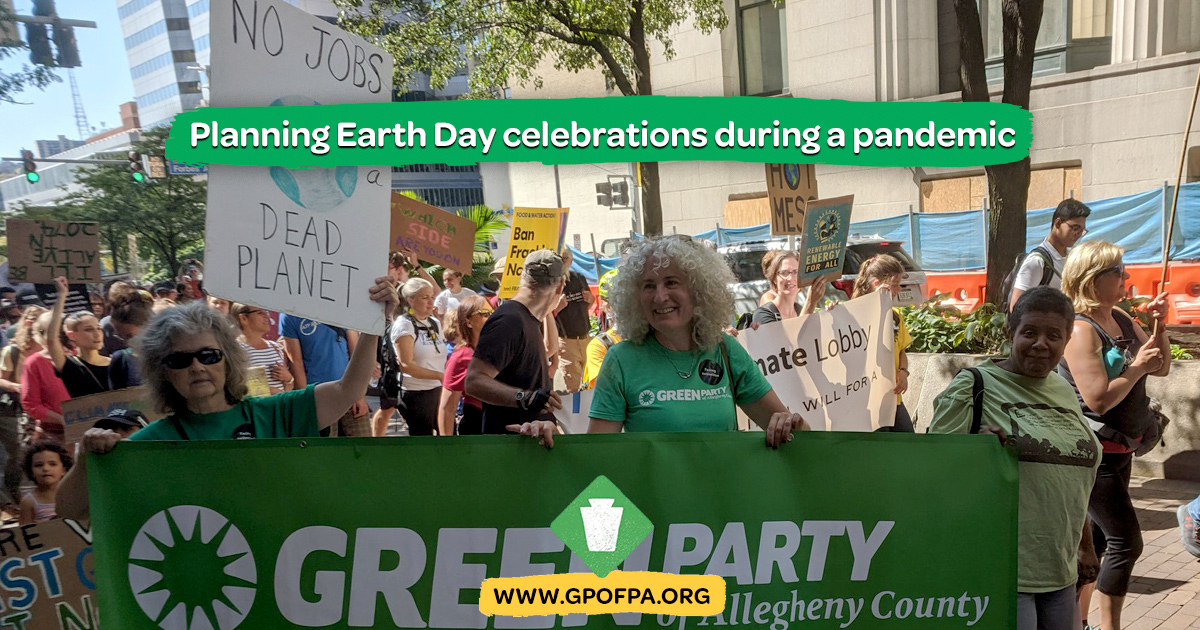 PHILADELPHIA – "Earth Day, April 22, is important to members of the Green Party of Pennsylvania (GPPA)," said Chris Robinson, leader of GPPA's communication team. "In past years, GPPA has held big events for Earth Day. I remember when we organized with our movement friends to hold Earth Day 2013 demonstrations at every regional office of the PA Department of Environmental Protection (DEP) because they were not protecting the environment from the fossil fuel industry."

"This year," continued Robinson, "PA Greens were prepared to celebrate the 50th anniversary of Earth Day by participating with the Youth Climate Strike Coalition in disrupting the fossil fuel industry's business as usual. Due to the global pandemic, PA Greens are now organizing alternatives."

"For the Green Party, Earth Day is every day," said GPPA Recording Secretary Beth Scroggin of Chester County. "We recognize the existential crisis of climate change that we are currently facing as a planet, and we are the only political party that has the courage to address climate change head-on, willing to make the necessary changes, instead of fearfully pandering to the status quo and calling it 'practicality.'"

"My years working in the Green movement are the culmination of a social justice spirit that I garnered from attending the first Earth Day with 60,000 others on April 22, 1970, in Philadelphia's Fairmount Park," recalled Chair Doug Mason of the Green Party of Centre County. "We went to celebrate our planet's environment and raise public awareness about pollution. Many of the 20 million who participated nationwide went on, like me, to pursue careers in ecological advocacy or to engage in related political activism.

"The challenges on this 50th anniversary," continued Mason, "include climate change, biodiversity loss and resource scarcity, and unfortunately, the policies of the duopoly fail to address such concerns adequately. Only the Green Party envisions a platform with planks that demand bold, immediate responses rather than the slow, incremental pace set by the two major parties. Ignore corporate green washing this Earth Day and join forces with a planet-wide political force that is our best chance of salvaging civilization and the rest of the biosphere. Register and vote Green in 2020 and beyond."

PA Greens are now joining with Youth Climate Strike Coalition to ask organizers to no longer physically mass mobilize for Earth Day and to instead think critically and creatively about how to engage their communities in disrupting business as usual through different and new tactics.