In 2019 we resolve to build a real Poor People’s movement! 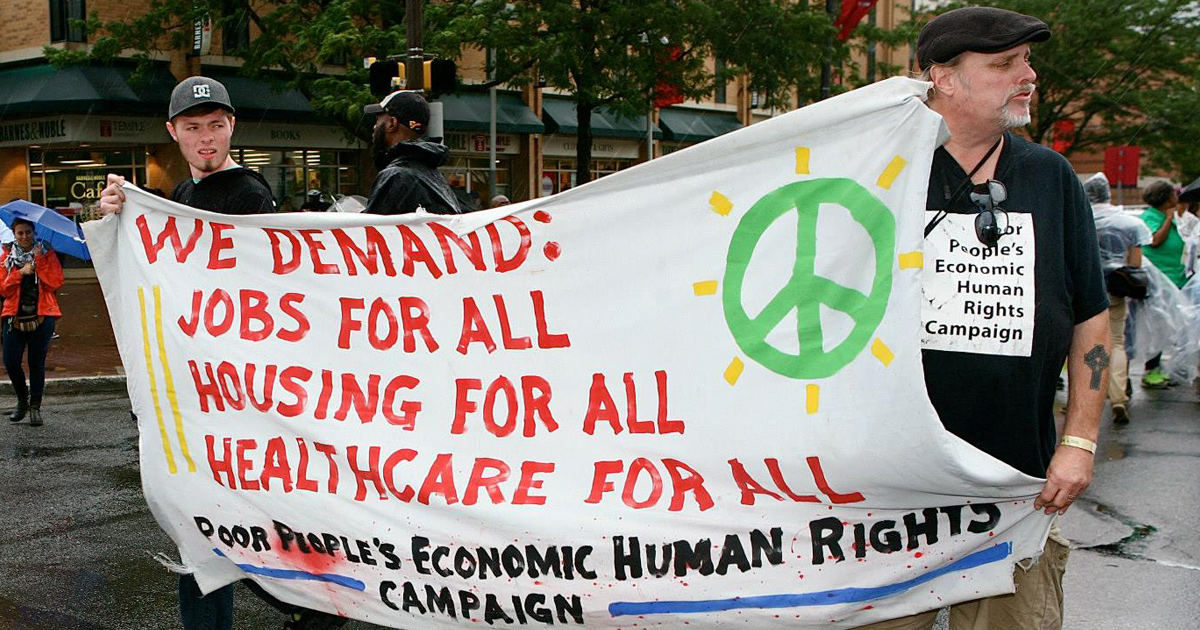 As we face a hold on food stamps due to the government shutdown, pending cuts to housing, the mass incarceration of our youth, skyrocketing costs of healthcare, and an opioid crisis in our neighborhoods, it is time that we come together to announce our declaration of independence from the two political party system that has failed us and our families time and time again.

The Poor People’s Economic Human Rights Campaign is committed to building a movement by and for poor people in order to create a better world for everyone. We believe that together we can – and must - reclaim land, food, clothing, housing, water, and healthcare. Instead of putting our faith in corporations, philanthropic institutions, and mainstream party politics, we take inspiration from this country’s long history of poor people’s movements as well as the ongoing movements that continue to struggle for economic justice around the world. These movements - from the Black Panthers to the Zapatistas - show that the power to take back our democracy is in our hands as we work together every day to build a better life for our families, and to end war at home and abroad.

At the start to this new year, the Poor People’s Economic Human Rights Campaign (PPEHRC) is calling on all those struggling for their housing, education, food, healthcare, and jobs to join together on the anniversary of Martin Luther King, Jr.’s birthday, January 21st, for a meeting and teach-in to start planning a real poor people’s movement – by and for poor people everywhere! We cannot continue to wait to be bailed out by those that oppress us.

The teach-in will take place from 10:00 – 2:00 pm at the Church of the Advocate, 1801 W Diamond St, Philadelphia, PA 19121. For more information, check out PPEHRC’s website at economichumanrights.org.

Cheri Honkala is a nationally and internationally recognized anti-poverty and human rights advocate. She is the co-founder of the Kensington Welfare Rights Union (KWRU), which later turned into the Poor People's Economic Human Rights Campaign (PPEHRC). She was the Green Party 2012 Vice Presidential candidate.