Henry Bear: An authentic voice for the people 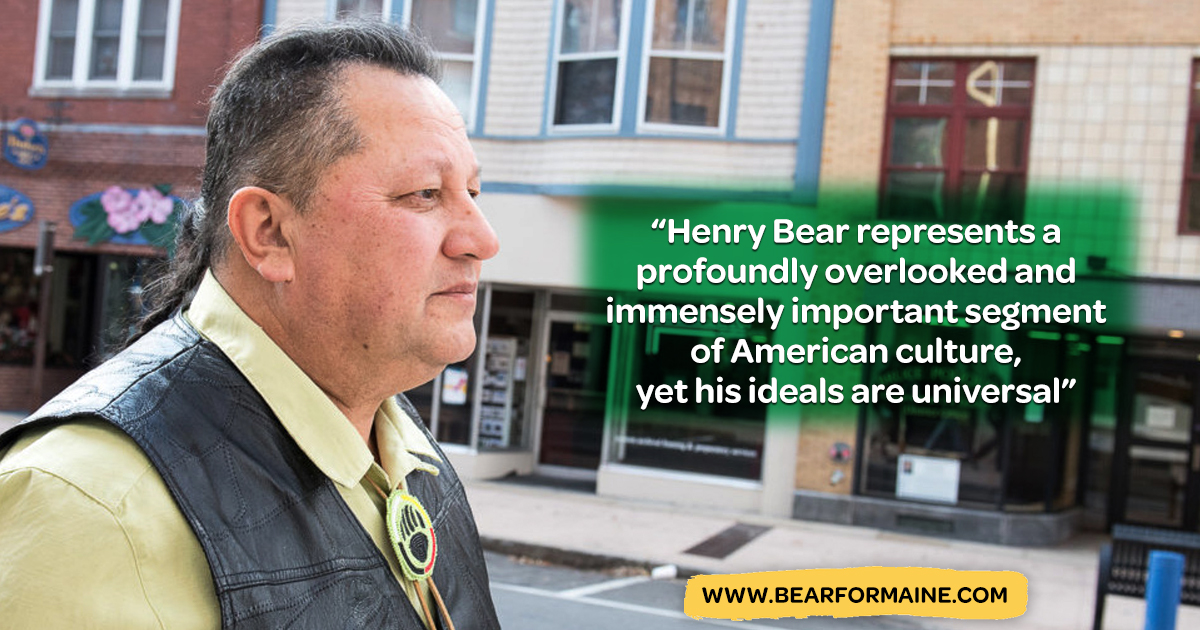 Maine Green Independent Party representative Henry Bear has successfully entered into the race for District 2 of the Maine State Senate. Bear, a member of the Houlton Band of Maliseets, will run against Incumbent Michael Carpenter (D) and Harold Stewart (R) as a write-in candidate.

Bear joined the Green Independent Party on November 22, 2017, becoming the second Green Party member to serve in the Maine House of Representatives and also one of the two highest elected members of the United States Green Party.

Bear grew up in destitution in Lewiston, Maine where he spent his childhood peddling household necessities such as apples and firewood to neighbors to help his parents pay the bills. The son of a Maliseet father and French Canadian mother, Bear was touched poverty, not to mention systemic racism, at a young age, a wedge which put great strain upon his family. Unable to connect with his indigenous roots as a child, he struggled through an early adolescence spent in the foster system. As a foster child, Bear was able to observe and appreciate different ways of life. It was during his time in the foster system Bear was able to reconnect with his father and begin exploring his Maliseet roots.

At the age of 17, he joined the United States Coast Guard where he served a 15-year career as a rescue coordinator. While serving in the Coast Guard, Henry met his wife, Violet, who he later married. The pair now take great pride in their 4 daughters, 10 grandchildren, and great grandchildren.

While in the service, Bear had the opportunity to meet Presidents George H.W. Bush and Ronald Reagan. Struck how personable and “real” he perceived the presidents during their interactions, Bear found himself drawn to politics. Upon returning to Maine, Bear moved to the Maliseet reservation and became an active and well-respected member of the community, soon becoming president of the Central Maine Indian Council as well as an elected tribal council member.

Finding a sense of community amongst the Maliseet, Bear was inspired to raise awareness to the historic abuses faced Indigenous peoples in America. Motivated the Maliseet who paid his way through College at the University of Maine and Law School at the University of New Brunswick, Bear graduated with a law degree in 1990. The hard work of the tribe, which included catching and selling fish to pay for Bear’s schooling was rewarded in the form of a strong and determined attorney, dedicated to helping the Maliseets seek legal justice.

Bear worked tirelessly as a lawyer for many years, aiding tribal members in an office space set up in the home his father built years before. He accepted what payment the thankful residents could give him, often earning bread and fresh meat for his days work instead of cash.

Representing the Maliseets in Congress

In December of 2012, Henry Bear became the first politician to represent the Houlton Band of Maliseet Indians when he assumed office as a member of the Maine House of Representatives. Bear has served three terms in the house of Representatives, serving in the 126th, 127th and 128th Maine State Legislatures from December 2012 through December 2018. During this time, Bear introduced and advocated fiercely for legislation to protect Indigenous people and even campaigned to have the federal holiday Columbus Day renamed to "Indigenous People's Day". The bill to rename Columbus Day was fiercely debated in the House of Representatives, drawing a great deal of attention to the importance of sharing and preserving Native American culture, as well as the tendency of history books commonly found in our classrooms to gloss over the injustices caused to the Native Americans.

"This would be an annual opportunity to share the history and traditions of Maine's native people with the citizens of this state. A deep understanding of Maine's past is critical to its promising future" Bear told Bangor Daily News in a statement at the time of the Columbus Day / Indigenous People's Day debate.

As a former service member, Bear additionally works hard to address the needs of veterans. Bear has played a major role in the passing of legislation providing tuition assistance to veterans and other relief efforts, earning him the American Legion's Legislator of the Year Award in 2016. He has served as a part of Health and Human Services and Veterans and Legal Affairs committees within the Maine House of Representatives.

"You could say I'm a true son of the Second District, born, educated, and life-long resident. I have skills to put differences aside and use democratic solutions to achieve a truly moral economy and push back against powerful bullying in all forms. We have the technology to communicate with each other, anywhere, instantly. I will use it to implement policy agreements that move us toward a healthy and prosperous community, a progressive and transparent government, and safer and more inclusive world community." Bear said in a 2017 Green Party Statement.

"I have found that our issues are very similar, especially on the issues of the environment and civil rights and sustainable economic development and income equity. I believe in health care for everyone who can't afford it and I believe in ensuring that one person's hard day's work results in a living wage, enough for a house and a car payment, and food for her family." Bear stated in regards to his reasoning behind joining the Green Party.

Determined for continued justice for Indigenous peoples, Bear has continued to expand upon his formal education. Earlier this year, Bear once again made history when he was awarded a Master's of Law degree from The University of Maine School of Law, the first member of the Houlton Band of Maliseets to do so.

"My concern has always been, from a young age, to try and help alleviate the situation for my people," Bear said to The County. "The master's degree is just a continuation and a natural progression of my effort to participate in and be more competent in doing so."

With his legal knowledge, Bear works hard to ensure that native people are being treated with the dignity and human rights entitled to them. Bear ascertains that a 1776 treaty granting sovereignty to native tribes in Maine takes precedence over 1980 legislation binding tribes Maine's laws and jurisdiction, except for in the case of "internal tribal matters".

This 1980 legislation severely limits the autonomy of Maine's native peoples, subjecting them to measures which include needing a state-issued permit to hunt on tribal land, declining water quality standards, and other factors which make it difficult for some tribes in Maine to get access to tribal incentives and assistance, otherwise available to tribes nationwide. At the time of the 1776 treaty, Indigenous tribes held claim to roughly two-thirds of Maine. Currently, the decision of whether or not a federal law applies to Maine tribes is decided in congress.

Another tribal endeavor, the construction of a casino on Maliseet land, also has the support of Bear. The tribe has been campaigning to build a casino on their Maliseet tribal land since 2013, a move that would create over 100 jobs in the community as well as bring in millions of dollars (an estimated $200 million) to the region's economy. While the Maliseet operate two casinos in near Canada, Maine's two private casinos are not tribally-owned. 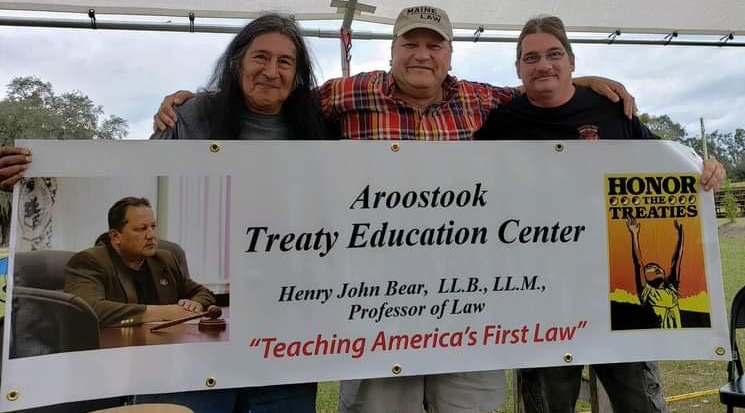 In addition to his political endeavors, Bear plans to teach at the Aroostook Treaty Education Center, a non-profit in Houlton Maine where he plans to educate the public in regards to native culture and the historic treaties which have greatly influenced the relationship between indigenous tribes and both the state and federal government.

While the passage of a 2001 law called for Maine public schools to teach Native American history, a lack of funding has severely hurt this initiative. Bear hopes to combat this through the work of the Aroostook Treaty Education Center while continuing to raise awareness of the injustices experienced in the indigenous community.

Bear advocates to shed light upon other local issues including recurring drought in Aroostook County and the underground metallic mine a Canadian company is building on Maine's Pickett Mountain. This mining company plans to rezone approximately 197 acres on the mountainside, enabling them to set up facilities and search beneath the ground for deposits of copper, lead, silver and gold. These planned excavations have resulted in a great deal of concern amongst local residents, especially regarding the impact these measures may have upon the safety of local drinking water.

The 2020 election campaign is a route which Bear's message has the potential to be heard millions. Henry Bear represents a profoundly overlooked and immensely important segment of American culture, yet his ideals are universal.