The Foundation For International Justice Is Anti-Imperialism 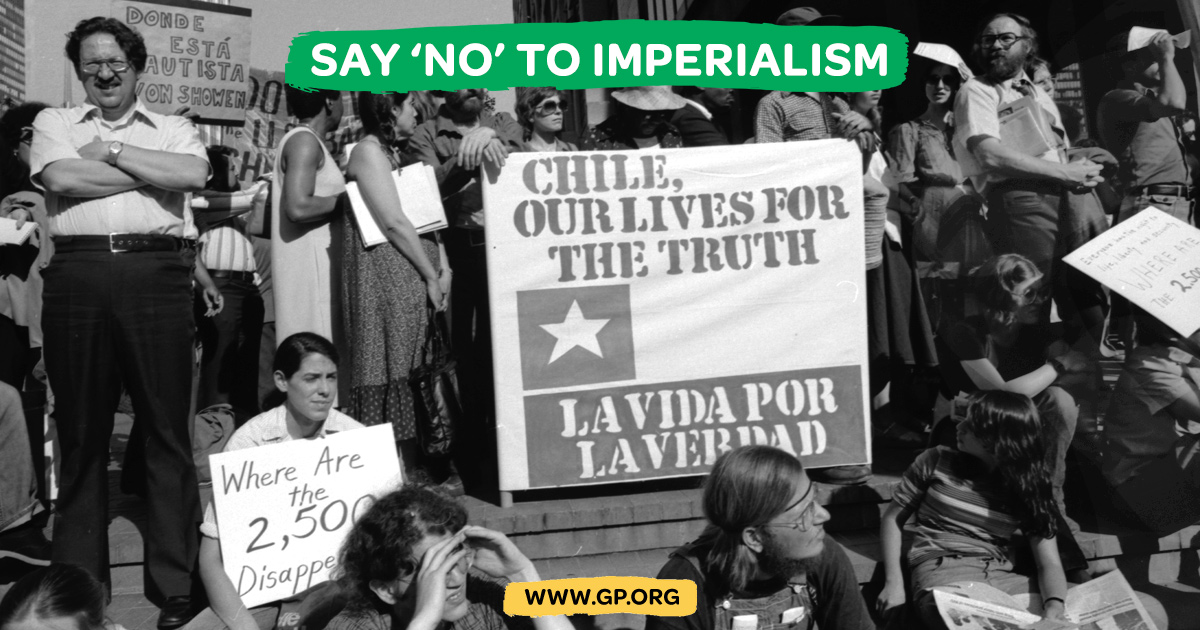 Advocacy against imperialism is needed to prevent confusion around US militarism. The US disguises imperialism by attacking so-called “dictatorial” leaders who “use violence against their own people.” This results in Orwellian-phrased “humanitarian” wars – violence by US surrogates inside a country, massive funding to create opposition against a government or economic sanctions that cause widespread suffering.

The propaganda justifying these abuses hides the real intent — expansion of US domination so US corporations can profit from resources and cheap labor under a US-friendly government. People confused by this rhetoric sometimes repeat the propagandistic claims of US imperialists and help justify US intervention.

Why US Imperialism Must Be Opposed Today

US imperialism is aggressively working on almost every continent through militarism, regime change, corporate trade agreements, economic blockades and creating indebtedness. The destruction of Libya, in an illegal “humanitarian” war, and the destruction of Iraq, in a falsely justified war, where both leaders were brutally assassinated, highlight the necessity of being clearly anti-imperialist.

There are many countries suffering from US imperialism today. Here are just a few:

Syria: Every president since the 1940s has sought to dominate Syria and has had specific plans for regime change. The Syrian conflict, often misdescribed as a civil war, is a war of aggression by the US, Saudi Araba, and Israel. During the George W. Bush administration, documents show plans to undermine the Assad government through terrorism, chaos and other attacks. In 2006, the United States started to finance an external opposition to Assad. In 2007, a plan for regime change in Syria was agreed upon between the United States, Israel, and Saudi Arabia. The US began to use “color revolution” tools, organizing opposition in Syria, training citizen journalists and urging an “insurgency.”

During the Arab Spring-era in 2011, arrests of anti-Assad youth in Deraa resulted in protests. The police used water cannons and tear gas to disperse the crowd, but on the third-day protests turned violent, even though Assad announced the release of the detained youths. The police fought armed protesters, resulting in the deaths of seven police. Protesters torched the courthouse and Baath Party Headquarters. Violent protests continued and escalated and the Syrian government responded with violence.

Robert, the first US ambassador to Syria in five years, marched with the regime change protesters. He traveled through Syria inciting rebellion against Assad, according to this . He had to flee the country out of fear.

The situation escalated into a seven-year war, which has resulted in hundreds of thousands of deaths, mass displacement, war crimes on all sides and unproven accusations against Syria of using chemical weapons. This week, seventy Syrian tribes declared war on the US at a time when Israel and the US are increasing their military campaigns in Syria.

The US has multiple imperialist interests in Syria. The US would like to close Russia’s Navy base in Tartus, Syria on the Mediterranean. A gas pipeline from Qatar to Turkey is competing with one from Iran to Syria. With large finds of methane gas in the coastal waters of Israel and Lebanon, it is likely they also exist in Syrian waters.

Iran: US imperialism in Syria is tied to in Iran. As with Syria, domination has been the goal of the US since the 1950s when the CIA engineered a coup that put in place the Shah, a dictator who ruled until the 1979 Iranian Revolution. The US has long sought to control Iran‘s vast oil resources.

The US used the same tools of regime change as in Syria and other countries, e.g. massive funding to build opposition to the government, supporting, buildingand manipulating protests, economic sanctions, and threats of militarism. These strategies have caused disruption but have failed to undermine the government.

Sanctions and the US violation of the nuclear agreement may backfire against the US as countries are fighting back against them and the US is being isolated in the UN. The US also conducts a false propaganda campaign, with the media playing along, about a nuclear weapons program that never existed and makes false claims of Iran sponsoring terrorism. And, as it did in Iraq, Libya, and Syria, Israel is urging war on Iran. This may lead to the US creating a Syrian-like war in Iran, threatening world security.

An Anti-Imperialist Mural in Caracas, Venezuela. From Telesur.

Venezuela: Another country with vast oil resources, Venezuela has been threatened with regime change, coups and war due to US imperialism that is supported by the elites in the US. The US uses the same regime change tools, e.g. a propagandistic barrage of lies about a “dictatorship”, economic sanctions, high-levels of funding to build opposition, violent protests, terrorismand attempts to foment a civil war.

Venezuela has faced a continuous coup since the election of Hugo Chavez. In 2002, a coup against Chavez was reversed by people’s protests. There has been an economic war since then. Wikileaks’ documents show Hillary Clinton sought to undermine and replace the Chavez-Maduro government. A coup in 2016 was foiled. In 2017, there was an embarrassing failed coup supported by the US. Trump is continuing long-term US policies seeking to dominate Venezuela.

The economic war creates challenges for the Venezuelan government. The US economic war blocks food, medicine, and essentials, while traitors inside Venezuela, from the wealthy class, do the same. These internal traitors even call for sanctions and war. The US falsely claims a humanitarian crisis exists in order to justify intervention to steal the nation’s oil and natural resources.

Sadly, this fools too many people who are not clear on opposing US imperialism, while it also unites many in Venezuela against US imperialism. The US-allied internal traitors admitted to 17 years of crimes in a proposed amnesty law in 2016, when they controlled the National Assembly.

In Latin America, particularly in Venezuela, Colombia plays the role of Israel for the US as the point of the US spear threatening war. Colombia has long-worked with the CIA for regime change in Venezuela. Indeed, Colombia just brought the imperialism military tool, NATO, to Latin America. The US and its allies are looking toward war,  making war preparations, conducting military exercises and are calling for a military coup. The world is saying ‘no’ to war against Venezuela as is much of Latin America.

In Venezuela, democratic elections resulted in a landslide victory for President Maduro, which was really a defeat of US imperialism. The election was important as the US, Canada, and the European Union were threatening Venezuela. It was a decisive election for the Bolivarian Revolution, which will continue for now.

And, There Are More: These are three examples of many. In Latin America through non-governmental organizations and US agencies, the US fundsoligarchy, opposition to democracy and support for neoliberal policies and has a long history of US coups. In Nicaragua, the same tools of regime change are being used. There has been a US-supported soft coup in Brazil and Honduras.

Coups and militarism are not limited to Latin America. During the Obama era, US coups in Ukraine and attempts in the Middle East occurred. Ukraine deserves special mention as this country, which borders Russia, was a long-term imperial aim of the United States. State Department official Victoria Nuland said the US spent $5 billion to build an opposition to the government and manage a coup. There are now proposals to arm Ukraine against Russia, so the danger is growing.

The dramatic protest against democratically-elected President Viktor Yanukovych in 2014 was a US coup spearheaded by violent neo-Nazis. This Obama-era coup was “the most blatant coup in history,” according to the corporate CIA-firm, Stratfor.  The US has taken over their gas industry, putting Joe Biden’s son and a longtime friend of John Kerry on their board, has taken over agriculture, has a former State Department official serving as finance minister, picked their Prime Minister and put in place the US’s “Our Ukraine Insider” president. In the US, media propaganda is constant, focusing on Crimea returning to Russia and demonizing Putin.

While there are more current examples of US imperialism, we will finish with a brief discussion of Africa, where the US seeks to dominate the land, resources, and labor of a continent which holds natural resources critical to 21st Century technology and oil and where $100 billion in US corporate theft occurs annually. Under Obama, AfriCom greatly expanded and the US now has bi-lateral military agreements across the continent, military bases, drone bases, Special Operations Forces and a military presence in 53 of 54 countries creating an imperial-scale military presence.

The Congo, which has suffered 500 years of European and US imperialism and where four million people have been recently displaced, deserves special focus. The Congo has natural resources more valuable than the entire EU’s GDP. Tech companies violate human rights, such as children as young as seven mining cobalt for lithium batteries.  Africa is shaping up to be the center of 21st Century imperial US wars.

These conflicts are all rooted in resource sovereignty in Latin Ameria, the Middle East, Africa and Asia. Do these countries control their natural wealth or will US imperialism steal it from them? Peace and justice movements must build on a foundation of anti-imperialism and not be fooled by the lies of elected officials, militarists, and the corporate media.

Some will attack those clearest on opposing imperialism. At the Left Forum, a small group criticized long-time US human rights and peace advocate, Ajamu Baraka, for his stance opposing US imperialism in Syria.  The previously unknown group, the “League for the Revolutionary Party”,  was made up of a small number of members of the International Socialist Organization and Democratic Socialists of America. They showed how those who do not make opposition to imperialism a foundation of their advocacy are easily confused.

They had to misquote Baraka and take his views out of context to justify their attack. By protesting Baraka, they attacked the leader of the Black Alliance for Peace, making their protest racist. They also protested someone who challenged the war party duopoly, as he was the vice presidential nominee of the Green Party. Their protest not only supported US militarism in Syria but sought to weaken the rebuilding of the black peace movement and challenges to the war parties.

If we ground ourselves in anti-imperialism, we will not be as easily misled. We must respect the sovereignty of other nations and support popular struggles without promoting US intervention.

The people of many countries unite in opposition to US imperialism, economic warfare and threats of militarism. It is our job in the United States to act in solidarity with them and say ‘no’ to US imperialism.