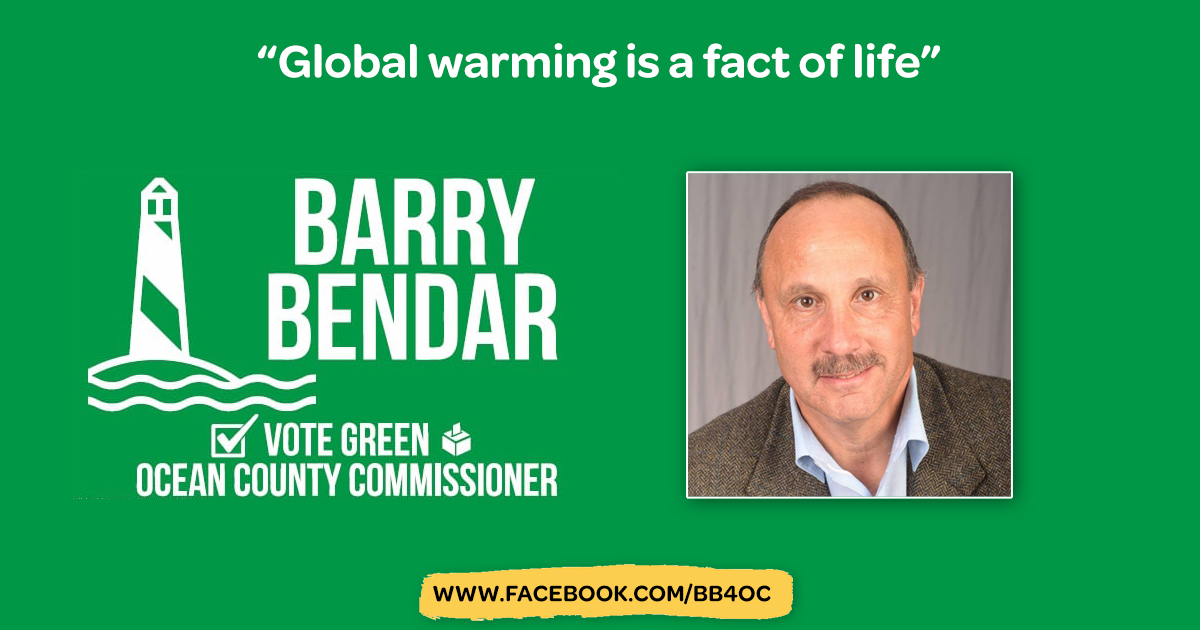 OCEAN COUNTY, NJ — The 2021 election campaign culminates when voters go to the polls Nov. 2. Among their decisions will be choosing members of the Ocean County Board of Commissioners.

There are two seats up for election and seven candidates seeking for those positions, which are three-year terms. Patch asked each candidate to answer questions to give voters information about who they are and their stances on various issues. We are printing their responses in full, unedited except for spelling or punctuation.

Here are the answers from Barry Bendar.

Why are you seeking office?

To break the stranglehold the political "machine" has on Ocean County and put the voters' needs first.

What do you feel is the most pressing issue facing the community, and what do you want to do about it?

Global warming is a fact of life, and those who choose to put their heads in the sand are just expediting the problem. The County Commissioners must take responsibility for addressing this issue in regard to Barnegat Bay. The bay is our heritage, and by leaving the responsibility for addressing development along the bay in the hands of the individual municipalities is a recipe for disaster. A comprehensive plan must be created so that all towns will follow the same rules and standards in regard to development along the bay. Since we all share the bay, all it takes is one "rogue" municipality to ruin it for everyone.

What are the critical differences between you and the other candidates seeking to serve?

I am not a "machine" politician, which I'm sorry to say I cannot assert for my opponents. I abhor elected officials who use their office to "feather their own nest," and put the needs of their constituency as their third or fourth priority when they take office. I will not genuflect or kiss the ring of any political boss.

Describe the other issues that define your campaign platform.

To the best of my knowledge, Ocean County is the only county in New Jersey which does not have a homeless shelter. This is not acceptable. Every resident deserves a roof over their head, and there is no reason for anyone in Ocean County to be sleeping on the street.

A second issue is the rampant nepotism and cronyism that pervades our county at all levels. This costs the taxpayers dearly, and is a big reason for New Jersey's property tax issue overall. I would work tirelessly to make sure anyone hired by the county is qualified for that position, and professional contracts would be given based on qualification as opposed to going to the highest bidder in campaign contributions.

The lack of transparency by the County Commissioners is also a serious issue. Holding their meetings at an hour when most Ocean County residents are at their place of employment limits discussion and openness. If the time change is not possible, then the meetings should be recorded and televised by the Ocean County College television studio. Enough of backroom decisions that no one knows about!

What accomplishments in your past would you cite as evidence you will be effective in office?

In my 42 years of employment, I've worked with people of various personalities. I have been consistently successful by putting the company goals first ahead of any pride or vanity. I did what I had to to get the job done. This focused work ethic would be what I would bring to my position as County Commissioner.

What else would you like voters to know about yourself and your positions?

As a member of the Green Party of New Jersey, I take no donations from special interests or political action committees. This means that I owe no favors to any such group, and can work solely in the behalf of the residents of this county. We believe in grassroots democracy and social justice, and I commit to work towards those end. It's time for a third party that is different than the status quo.