The Bolton Speech on Africa: A Case of the Wolf and the Foxes 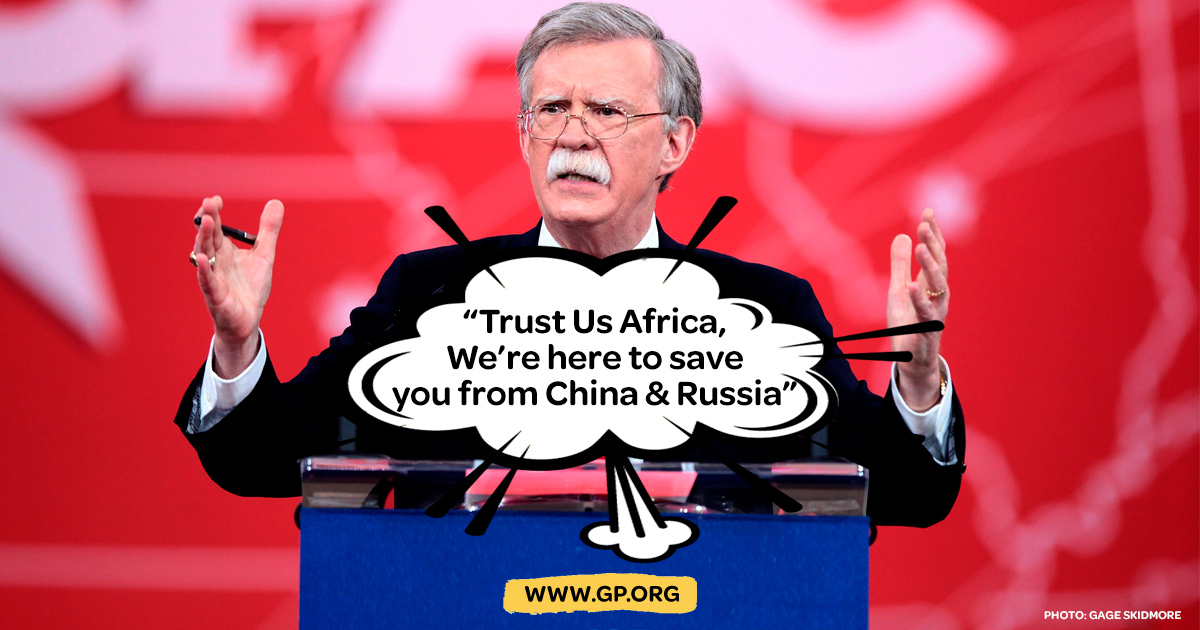 The Trump administration claims China and Russia are exploiting Africa, but US policy offers nothing but more guns, more bases and more subversion.

“Economic relations with China provides African states a modicum of spaceto exercise more effective national sovereignty than had ever been afforded them by the European colonial powers.”

Malcolm X reminded us that we had to be careful about the difference between the wolf and the fox. The wolf for black people were the hardcore, racist white folks with the hoods and clearly articulated stance in support of white supremacy. The fox, on the other hand were the liberals who were supposed to be our friends. Their ultimate support for white supremacy was always just as deadly but sugarcoated in diversionary language like “humanitarian intervention” and the “responsibility to protect.” The game, according to Malcolm, was that black folks would recognize the danger of the wolf and run from the wolf straight into the jaws of the fox with the consequence being just as fatal because both the fox and the wolf are members of the same canine family.

This captures in many ways not only the nature of the ongoing saga of U.S. politics in general where there is really no substantial difference in the class interests and fundamental priorities of the two capitalist parties, but specific policies like U.S. policy in Africa.

“In Bolton’s world, the real threat to African states were the “predatory” Chinese and, for whatever reasons he threw in the Russians.”

In a speech last week before an audience at the right-wing Heritage Foundation, John Bolton unveiled the Trump administrations’ “new Africa Strategy.” In what could only be characterized as another example of the White supremacist racial blind-spot, Bolton revealed an understanding of Africa and the role played by the U.S. and Europe that was a compete departure from the reality of the systematic underdevelopment of that continent by Europe and the U.S.

In Bolton’s world, the predatory powers in Africa were not the European powers that raided the continent for black bodies to create the wealth of Europe and then carved up a weakened and devastated Africa among those same powers in 1884. It wasn’t the U.S. that murdered African leaders, overthrew African states and imposed brutal neocolonial leaders. No, the real threat to African states were the “predatory” Chinese and, for whatever reasons he threw in the Russians, that, according to Bolton “stunt economic growth in Africa and…threaten financial independence of African nations.”

Therefore, in typical colonialist arrogance in which Bolton’s analysis represents objective truth, he states that African states have a choice. Either surrender to Chinese and Russia interests, or aligned themselves with the U.S. to secure “foreign aid” and avoid subversion from the U.S.!

“There is really no substantial difference in the two capitalist parties’ policies in Africa.”

Of course, there is a different position, a reading of African history from the point of view of the African. From that perspective, it was the predatory practices of European and U.S. imperialist policies that reduced Africa to its present situation as the richest continent on the planet in terms of natural resources, land and people -- to a balkanized continent of 54 nations, economically disarticulated, politically fragmented and still suffering the cultural effects of alien colonial cultural imposition.

Whatever the national intentions of China or Russia may have in Africa, only the most jaded or confused could fail to conclude that economic relations with these states and in particular with China provides African states a modicum of space to exercise more effective national sovereignty than had ever been afforded them by the European colonial powers that craved up and unmercifully exploited African labor and land.

But that is the point and the intent of U.S. Africa policy over the last 73 years since the end of the second imperialist war in 1945.

“It was the predatory practices of European and U.S. imperialist policies that reduced Africa to its present situation.”

Bolton and the racist policy-makers in Washington don’t want to see Africa nations with any space to act independently of the dependence imposed on them by predatory trade regimes, the world Bank and International Monetary Fund debt peonage.

While China provides investment in African infrastructure and production capacities, the U.S. offers Africa militarism and subversion from Libya to the Democratic Republic of the Congo.

Bolton didn’t mention in his statement that U.S. strategy for Africa which centers military recolonization would be a continuation of the U.S. policies of the last few decades and in particularly during the Obama administration that saw the expansion of the U.S. military presence by 1,900 %.

It is clear that the Trump “strategy” offers nothing substantially different. The policy continues to be more guns, more bases and more subversion.

“The U.S. offers Africa militarism and subversion from Libya to the Democratic Republic of the Congo.”

The destruction of Libya that resulted in the enhanced military capacities of al-Qaeda in the Islamic Maghreb, Boko Haram in Nigeria, Ansar al-Sharia in Libya, the disastrous decision to carve up the Sudan and create yet another colonial entity called South Sudan, military and political support for PresidentKagame of Rwanda, President Kabila of the Democratic Republic of Congo, President Museveni of Uganda and expansion of AFRICOM reflects the murderous continuity of U.S. African policy.

When Bolton claims that in order to assist with African economic development it is “developing a new initiative called “Prosper Africa,” which will support U.S. investment across the continent, grow Africa’s middle class, and improve the overall business climate in the region.”

This approach is not in any way a departure from the Bush-Obama “African Growth and Opportunity Act, ” which made similar claims and focused on extractive trade policies to exploit African natural resources and served as basis of continued conflict over those resources in nations like the Democratic Republic of the Congo where more than six million Africans have died in resource based conflicts.

“The psychopathology of the white supremacist colonialist mind that renders it unable to cognitively apprehend objective reality.”

Bolton’s claim that it is Russia and China that “stunt economic growth in Africa, and “threaten financial independence of African nations, “represents another example of either cynicism or the psychopathology of the white supremacist colonialist mind that renders it unable to cognitively apprehend objective reality.

Therefore, Bolton’s speech and Trump administration policy was not so much a new strategy but a cruder reaffirmation of a political stance on Africa that has always put U.S. interests first, absent the flowery language and liberal pretentions of Obama’s Cairo speech earlier in his administration. From Obama’s “exceptional nation” to Trumps’ “Make American Great Again,” it has always been about putting the interest of U.S. imperialism first.

The people of Africa must not allow the African continent to be drawn into competing blocs during last death thrones of a dying neoliberal capitalist world system.

We say to Bolton, Trump and the neoliberal democrats – U.S. out of Africa, Shut down AFRICOM, Africa for Africans at home and abroad!

“The U.S. and Europe have nothing to offer for the new world that must be built.”

Our radical imaginations can conceive of a world in which the choice is beyond the wolf and the fox. We are on the side of the majority, the majority of the world that is suffering the structural violence of global neoliberal capitalist/imperialist system. But Africans in the U.S. must make a choice. Malcolm said you cannot sit at the table and not have any food in front of you and call yourself a diner. Africans in the U.S. have been sitting at the table of U.S. citizenship and calling themselves “Americans” while our people are murdered, confined to cages in prisons, die giving birth to our children, die disproportionately before the age of five, live in poverty, are disrespected and dehumanized. A choice must be made, do you throw in with this dying system or do you align with the working class and oppressed peoples of the world.

The people of the global South are clear. They can make intelligent distinctions between friends and enemies, between their national interests and the national interests of other nations and where those interest might converge, if only temporarily. But the one thing that is also clear is that the U.S. and Europe have nothing to offer for the new world that must be built. In fact, when Europe and the U.S. are reduced in power and influence globally, it will be one of the most important events for collective humanity in the last thousand years.