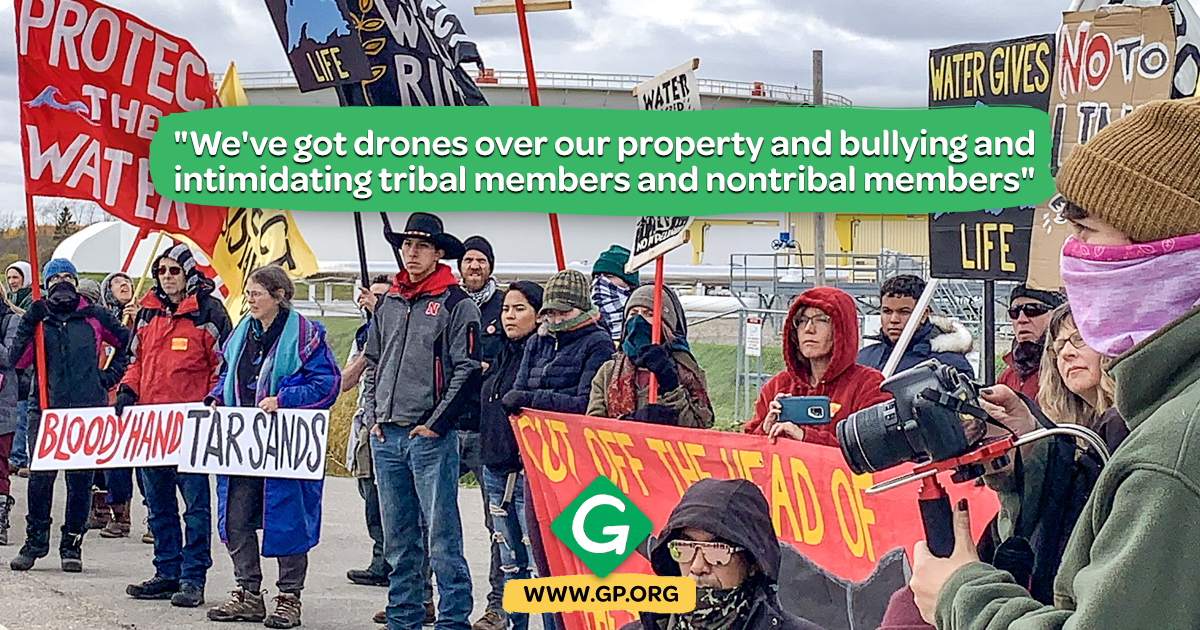 Anticipating a repeat of the brutally repressive police and corporate crackdown on Indigenous-led protests against the Dakota Access Pipeline at Standing Rock, Winona LaDuke—a longtime leader of the movement against the recently approved Enbridge Line 3 pipeline extension in Minnesota—told The Intercept in an article published Tuesday that campaigners have little faith in a state rule formally barring the use of "counterinsurgency tactics" against them.

Referring to a set of construction preconditions proposed by the Minnesota Public Utilities Commission that prohibits Enbridge or any of its contractors from "engaging in counterinsurgency tactics or misinformation campaigns designed to interfere with the public's legal exercise of constitutional rights," LaDuke, an Anishinaabe activist, said she was skeptical of the purported protection.

The two-time Green Party vice presidential candidate—she ran on the Ralph Nader ticket in 1996 and 2000—said the Indigenous-led Stop Line 3 coalition, which through legal and grassroots action has delayed the project for years, has already been targeted by Enbridge and law enforcement.

"We've got drones over our property; it starts with surveillance, it expands to the use of informants, entrapment, falsifying situations, and getting people charged with things they should not be charged with," LaDuke said. "It involves bullying and intimidating tribal members and nontribal members."

There are concerns that Enbridge Line 3 opponents will see a security crackdown as sweeping as the one near the Standing Rock Sioux Reservation during protests against the Dakota Access pipeline, which included the use of counterinsurgency tactics. https://t.co/SXxRKLGpbO

The concerns about company aggression and surveillance comes as a Minnesota regulatory panel on Tuesday signed off on Enbridge's plan, which also followed on the heals of federal approval by the U.S. Army Corps of Engineers.

With nearly all approvals in place, only the Minnesota Pollution Control Agency (MPCA)—which now has 30 days to consider the project—is left to sign-off before construction can begin.

"When you walk in the grocery store... there's some guy taking a picture of you with a cellphone," she said.

While a spokesperson for Canada-based Enbridge told The Intercept that the company "will not tolerate human rights abuses and will not engage or be complicit in any activity that solicits or encourages human rights abuse" and that it "recognize[s] the rights of individuals and groups to express their views legally and peacefully," Indigenous leaders say that the pipeline's very existence on their land is an abuse.

According to Stop Line 3, the pipeline will be capable of transporting nearly a million barrels of tar sands—known as the world's dirtiest fuel—from Alberta to a port in Superior, Wisconsin. Stop Line 3 says the pipeline will run "through untouched wetlands and the treaty territory of Anishinaabe peoples":

All pipelines spill. Line 3 isn't about safe transportation of a necessary product, it's about expansion of a dying tar sands industry. Line 3 would contribute more to climate change than Minnesota's entire economy. Minnesota's own Department of Commerce found our local market does not need Line 3 oil. We need to decommission the old Line 3 and justly transition to a renewable, sustainable economy. Line 3 would violate the treaty rights of Anishinaabe peoples and nations in its path—wild rice is a centerpiece of Anishinaabe culture, it grows in numerous watersheds Line 3 seeks to cross.

"It's well past time to end the legacy of theft from and destruction of Indigenous peoples and territories," the group says.

Four years ago, Native Americans and their allies from across the U.S. and around the world suffered brutal violence at the hands of police and private security forces on the icy, howling plains of North Dakota as they resisted construction of the Dakota Access Pipeline. DAPL threatens the Missouri River, which not only is sacred to the Standing Rock Sioux and other tribes but also is the source of drinking water for millions of Americans. The pipeline violates Indigenous treaty rights and exacerbates global heating caused by human activity.

Behind the scenes, a shadowy international mercenary and security firm targeted the water protectors with what The Intercept described as "military-style counterterrorism measures" in close collaboration with law enforcement agencies in at least five states.

It's no wonder, say Indigenous and environmental campaigners, that activists are wary of such tactics being used against them again due to Line 3 protests.

"When you walk in the grocery store... there's some guy taking a picture of you with a cellphone."
—Tara Houska, Giniw Collective

"How do they enforce that?" LaDuke asked of the commission's rules barring "counterinsurgency tactics," adding a Wizard of Oz reference: "Who's in charge of the flying monkeys?"

Will Seuffert, a spokesperson for the state Public Utilities Commission, admitted that the terms "counterinsurgency tactic" and "misinformation campaign" haven't even been defined by the agency, and that the official in charge of ensuring activists aren't targeted is himself a former police chief.

"I've been followed for hundreds of miles along the line by different trucks," Houska said. "I don't know if that's counterinsurgency, but it's certainly surveillance."