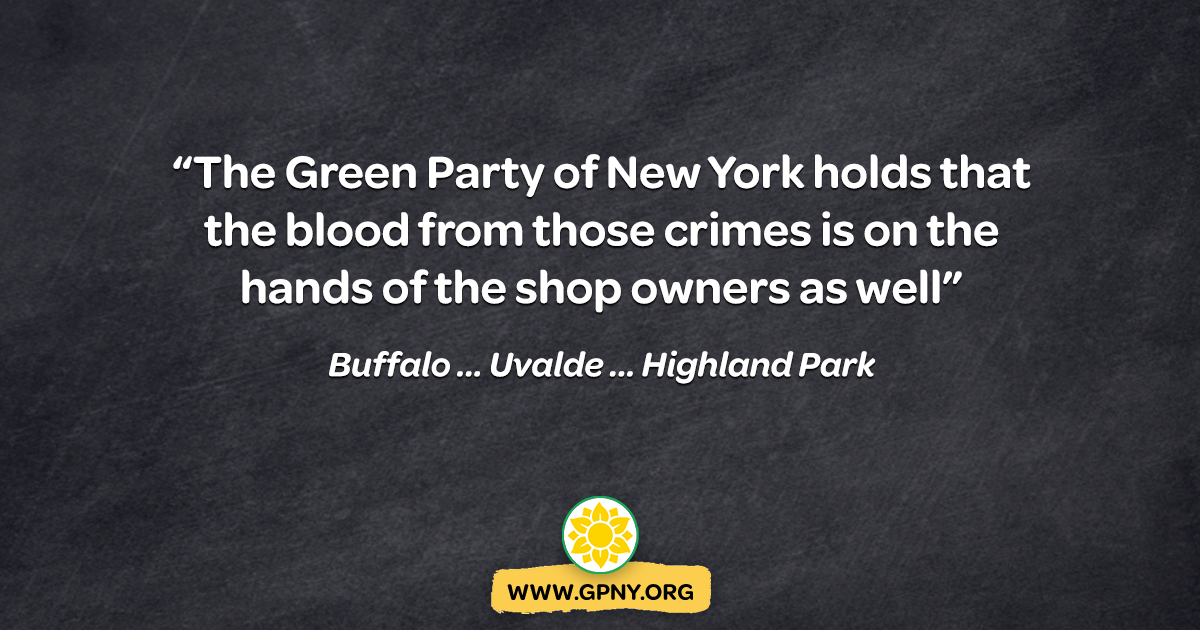 The Green Party of the United States was shocked and appalled by the mass shootings that took place at Tops Friendly Market in Buffalo, New York on May 14th and at Robb Elementary School in Uvalde, Texas on May 24th, and the Greens of New York and Texas were the most heartbroken of all. Our sympathies remain with the families of the 31 men, women and children who were killed in those unbelievable crimes, as well as the 20 injured survivors.

In the wake of these back-to-back tragedies, the Green Party of New York was hopeful for a response from our elected leaders that would finally turn the tide on the mass shootings that have been arriving with horrifying frequency for well over a generation.

Instead, our leaders disappointed us again. The Federal legislation that was passed in response to these shootings—the Bipartisan Safer Communities Act—was cheered in the press as the most significant gun control legislation since the defunct Assault Weapons Ban written in 1994. But this feeble and unremarkable new law contains nothing that can reasonably be expected to curtail further mass shootings of the sort that inspired it, a fact proven by the tragic mass shooting in Highland Park, Illinois that took place on the Fourth of July just days after the passage of the Safer Communities Act.

Since the massacres in Buffalo and Uvalde and Highland Park, hundreds more gun homicides and multiple mass shootings have taken place in America. It should now be clear to every citizen that, 23 years after the Columbine Massacre (which marked the beginning of our current era of routine mass shootings), the Democratic and Republican parties have absolutely no will to bring this outrageous situation under control. Instead, we can be confident that both parties will continue to bluff their way through whichever mass shooting is the next to shock our nation’s conscience, and the next shooting and the next… each one to come being a completely preventable tragedy.

The Green Party will no longer stand idle while these mass murders continue to arrive like clockwork. A rational gun control regime — one that protects the right to bear arms but also demands a minimum level of accountability from gun owners and gun retailers—is entirely achievable, and the Greens are prepared to do what the Democrats and Republicans will not do to bring sanity to this insufferable situation.

The Green Party’s agenda for the needed changes in our gun control laws includes the following:

In addition, The Green Party condemns the owners of Vintage Firearms in Endicott, New York and Oasis Outback in Uvalde, Texas. No gun retailer in the United States can feign ignorance of how frequently mass shootings are committed by young men using AR-15-style rifles (known to be the preferred weapon of mass shooters). Yet despite this, those shops still recklessly armed Payton Gendron and Salvador Ramos with the tools needed to commit their monstrous crimes. The Green Party holds that the blood from those crimes is on the hands of the shop owners as well, and we further demand that Congressman Brian Higgins of NY- 26 and Congressman Tony Gonzalez of TX-23 (where the Buffalo and Uvalde mass shootings were committed) immediately address why the stores that outfitted two domestic terrorists have escaped all scrutiny.

For generations America’s firearms industry has completely shackled our legal system and made any progress towards ending domestic gun terrorism all but impossible. This industry operates with hubris and a callous indifference to the natural and foreseeable consequence of their enterprise, and they are as much responsible for the plague of mass shootings in our country as are the murderers that they arm.

Going forward, the Green Party will hold the firearms industry—both manufacturers and retailers—accountable for the destruction they are causing, and the politicians who take that industry’s money in exchange for preventing the corrections to our laws that the people are demanding can expect no quarter.