The Green Party stands opposed to this bait-and-switch legislation that claims to improve access to voting while actually dismantling everyone's right to organize electorally against the parties of War and Wall Street. In a recent Gallup poll, a record 62% of US voters said we need a new major party.

No doubt you've heard from "progressive" groups about how HR1 contains much-needed voter protections. And it's true, HR1 contains some badly needed reforms concerning internet and same-day voter registration, unjust voter roll purges, voter-verified permanent paper ballots, early voting, no excuse absentee ballots, presidential candidate tax returns, gerrymandering, and more. That makes it all the more shameful for the Democrats to use those reforms as cover to eliminate competition from alternative parties.

The House passed HR1 this week for the second time (the first time was during the last Congress). However, it's unclear whether it'll pass in the Senate where Republicans will certainly oppose it. The 2020 Green Party presidential nominee Howie Hawkins is urging Congress to pass HR1’s voting rights provisions without the campaign finance reform section. HR1’s partial public campaign finance program based on matching funds accepts the domination of big private donations, including unaccountable dark money, in campaign financing. In fact, it eliminates the current limits on the expenditure private money for candidates who accept public funding. What kind of reform is that?

Therefore, there are two actions that you can take in parallel right now: 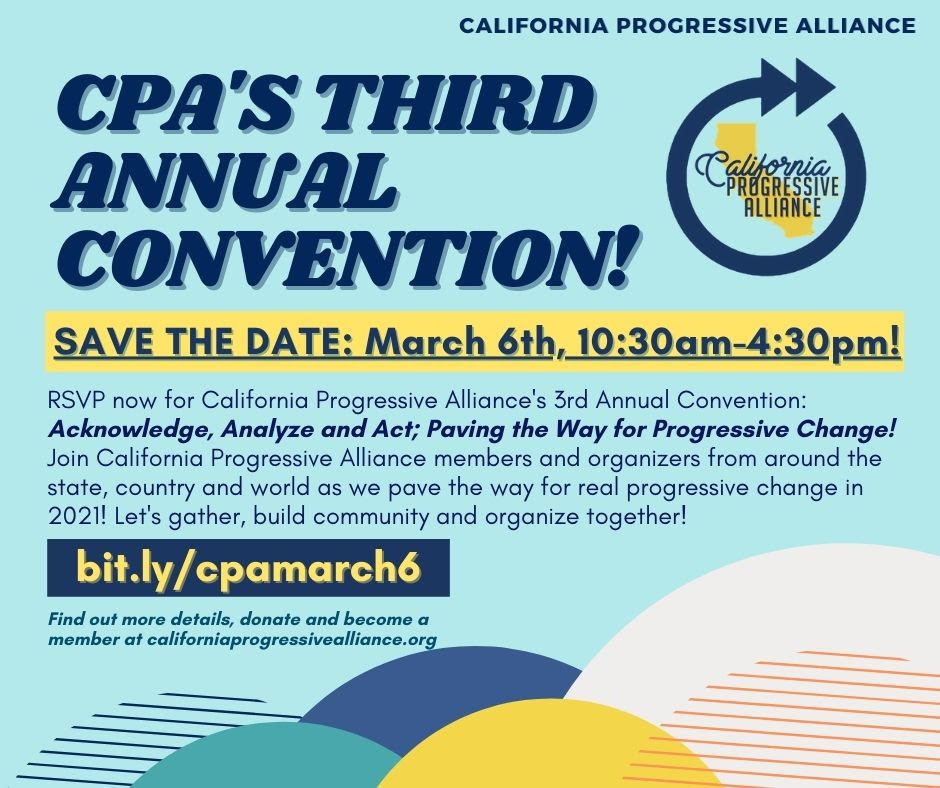 On Friday & Saturday, March 19-20 On March 20, 2003, the US launched the criminal invasion and occupation of Iraq. Eighteen years after that invasion, with many hundreds of thousands dead and trillions of dollars spent, the US war machine continues and expands its deadly presence in the Middle East and other regions of the world. At the same time the “War at Home” has resulted in expanding militarism in our communities in areas like policing and schools.

Join the San Jose Peace & Justice Center and its co-sponsors on Friday, March 19th from 6:30 - 8 PM for a panel discussion and recorded segments from community members in remembering this time 18 years ago. You can register to attend this panel at this link: https://bit.ly/IraqPanel

On Saturday, March 20th at 12 pm, we will return to the Peace Corner (Stevens Creek and Winchester Blvds) for a noontime rally with masks and social distancing. To help us build this important action, contact the Peace & Justice Center via its social media or email to [email protected].
Thank you! 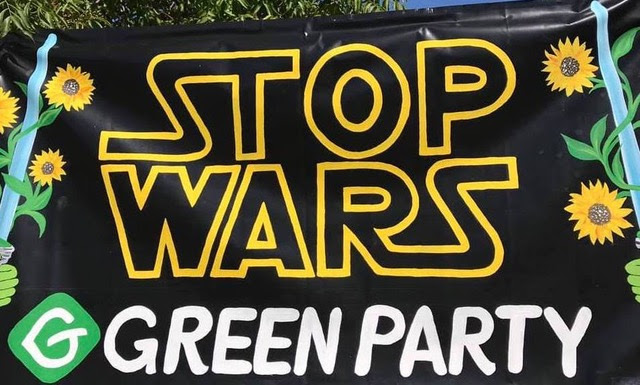 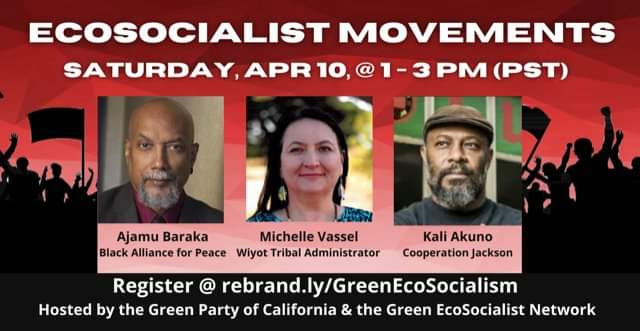 SAVE THE DATE! – EcoSocialist Movements

We are proud to co-sponsor on April 10th the third and final event in our series, co-hosted by the Green Party of California and the Green EcoSocialist Network, where we will discuss some of the leading global and national EcoSocialist movements that help us move towards an EcoSocialist future.

In the first part of our three part series Towards an EcoSocialist Future we dove deep into the meaning of EcoSocialism and discussed the importance of this manifesting this vision for the future of people and the planet.

In the second part of the series EcoSocialism; From Theory to Practice we focused on 'non-reformist reforms' as a way to transition to EcoSocialist programs.

Join the Santa Clara County Green Party for our monthly meeting (by teleconference) to learn about our plans and activities.

MESSAGE US for meeting details.