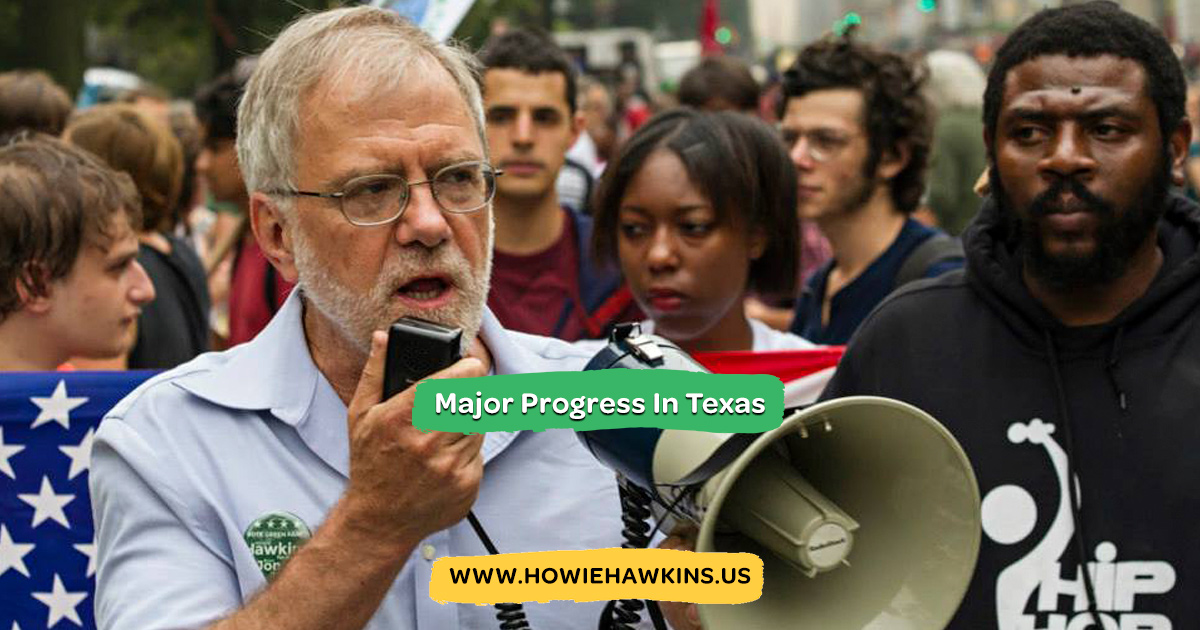 The Texas bill that will retroactively and automatically give the Green Party of Texas ballot access was signed into law earlier this week!

This is a cool win for a couple of reasons. First, we’re on the ballot because of the new law and because of Martina Salinas’ 2016 Railroad Commissioner race. Martina garnered 3.25% of the vote in 2016, enough to get us on the ballot under the new law.

Second, this is a win that Howie Hawkins 2020—our campaign—worked hard to secure. We helped mobilize Greens in Texas with an aggressive online and telemarketing outreach plan that had a singular focus: get voters to call their reps and demand passage of the new law.

Success is sweet! This win translates into a complete game changer for Green Party candidates—including our campaign. Without this bill, we would have had to pony up an estimated $100,000 just to get this campaign and other Texas Green campaigns on the ballot in 2020.

(Can you hear our collective sigh of relief?)

This is a huge win. But it’s just the beginning.

We need to put organizers on the ground now to help rebuild that state party from the ground up. That will take resources. And that’s where you come in.

As great as the Texas win is, many states still have draconian ballot access laws designed with one purpose in mind: to keep third parties off the ballot. In fact, Ballotpedia estimated that for an independent candidate for president to get on the ballot in all 50 states in 2016, they’d need more than 860,000 signatures. (We estimate 1.5 million to be safe.)

And, while we were in Alabama last week, we were reminded that, currently, we need 50,000+ signatures to get on the ballot—and then in order to keep ballot access, the presidential candidate needs to achieve 20% of the statewide vote.

No matter the challenges, our campaign goal is to get the Green Party on the 2020 ballot in every state in the Union, including the District of Columbia and the advisory vote in Guam, Puerto Rico, and other US territories that decide to hold advisory presidential votes.

That means we need to organize and deploy Greens nationwide in constant petition drives and organizing work until the end of next summer/early fall.

Now, we can always rely on our incredible volunteers, but they need coordination and support. Our campaign is committed to paying for a full time staff member to coordinate ballot access volunteers and hire Green organizers on the ground.

That’s where you come in. We need to raise about $1.5 million over the next year to get about 1.5 million signatures to secure ballot access in every state and territory. That’s $1 per signature. That's cheap, because the Greens can rely so heavily on our own activists.

Can you help out by sending $250 today? That’s the maximum amount that qualifies for 1:1 Federal matching funds, doubling your donation’s value to $500.

Whatever you can send will help us achieve nation-wide ballot access in 2020! There’s no such thing as a donation that’s too small—every dollar you send will be stretched to do the work of two or three dollars.

We need your help now. We need Green organizers working today, and every day between now and September 4, 2020, the last state ballot access deadline before the November election.

It’s profoundly anti-democratic that we have to battle for ballot access; but gaining ballot access will enable us to run local candidates and build the Green Party into major party from the grassroots up.

That’s a goal worth our hard work and money.