Cemeteries being underutilized for providing wildlife with needed safe space 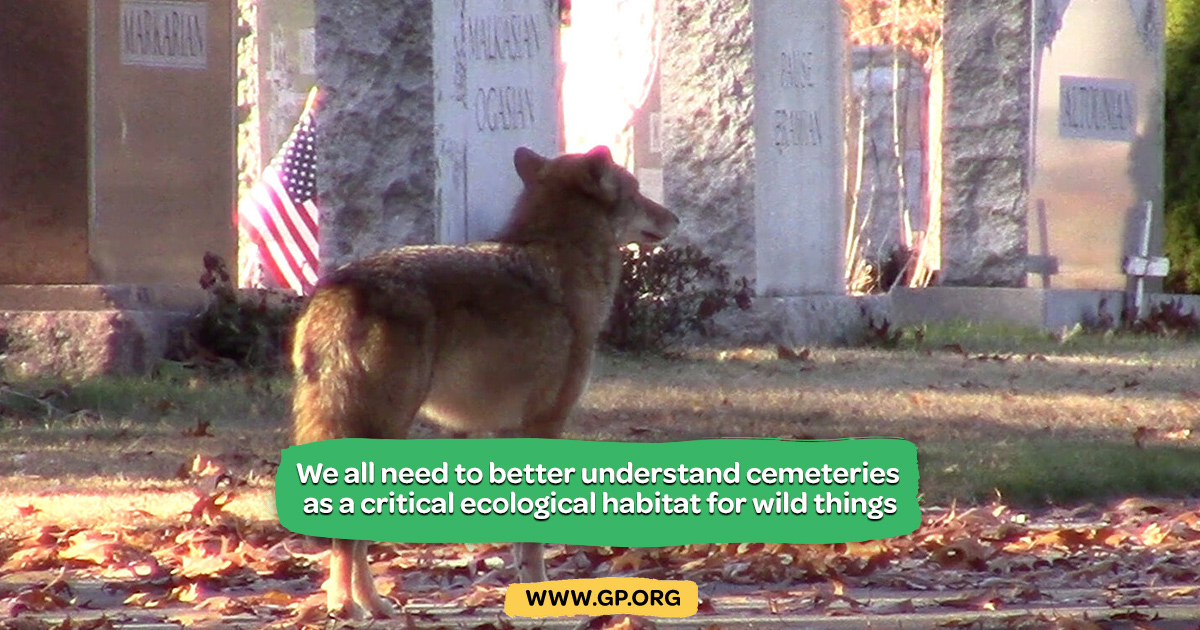 Coyotes are among the wildlife in Providence’s North Burial Ground that Greg Gerritt has photographed and videotaped.

PROVIDENCE, RI — I started hanging out in cemeteries when I was in graduate school, sort of a reasonable place for an anthropology major, but also a reasonable destination for someone who needs to be around trees. I returned to spending much time in cemeteries when I moved to Providence more than 20 years ago, walking in Swan Point Cemetery within four days of moving here.

I still walk in Swan Point at least weekly, the magnificence of the 170-year-old forest along the river matching any of the famous people buried there, and demonstrating greater diversity. But much more of my time is spent in the North Burial Ground, which is on my side of the hills and ridges that make up the spine of the East Side.

Shortly after I convened a delegation to visit the city’s Parks Department to unlock the walk-in gates of the North Burial Ground and let the community in, I found a thriving toad population breeding in a small wetland. The Fowler’s toad tadpoles were rather photogenic and within a couple of years I found myself in the middle of a long-term project to document the lives of the wild animals that live in the North Burial Ground.

While this journey has been interesting, what I want to focus on here is the need for all of us to better understand cemeteries as critical ecological habitat for wild things and to recognize that as an important part of what cemeteries do in a community.

I think of it as cemeteries as refugia. Even the tiniest of urban cemeteries have a few trees, some squirrels, small birds, insects, and who knows what else. But larger urban cemeteries, especially if they have trees and water, can support nearly everything that lives in the bioregion.

Some of the extraordinary features of larger cemeteries are the easy digging soils — sometimes they smartly locate cemeteries in areas of easy digging and good drainage — which encourage all sorts of burrowing creatures; lack of street lighting, allowing darkness to reign at night; and lack of automobile traffic after dark, allowing all of the wild animals to move around much more safely at night. This is especially important for amphibians — one of the most endangered group of animals on the planet — as they mostly breed at night in places where breeders congregate from all over the area.

I also want to put in a plug for thinking about stormwater management in cemeteries — in a new way, more in keeping with cemeteries and refugia for both people and wild things. Standard stormwater management techniques want to whisk water away as soon as possible. But wildlife needs pools of water for drinking, breeding, and feeding, and open waters, moving or ponded, are critical habitat.

Cemeteries have less need to get rid of water fast, water providing a relaxing and calming vista for those visiting the deceased, and with few nighttime visitors, less of an urgency to remove any place mosquitos might breed, especially as this also provides habitat for mosquito predators, which will keep mosquito populations in check most years.

I have looked around for partners to further the discussion and practice of cemeteries as refugia, but other than Friends of the North Burial Ground and Randall Park I have had found few enthusiasts. If this interests you, please contact me and hopefully we build the movement.

Providence resident Greg Gerritt won an Environmental Protection Agency Merit Award in 2012 for his work raising awareness about the importance of composting. He is a member of the Green Party of Rhode Island and is the founder of Friends of the Moshassuck, and runs the blog Prosperity For RI. He can be reached at [email protected].