We were censored last night 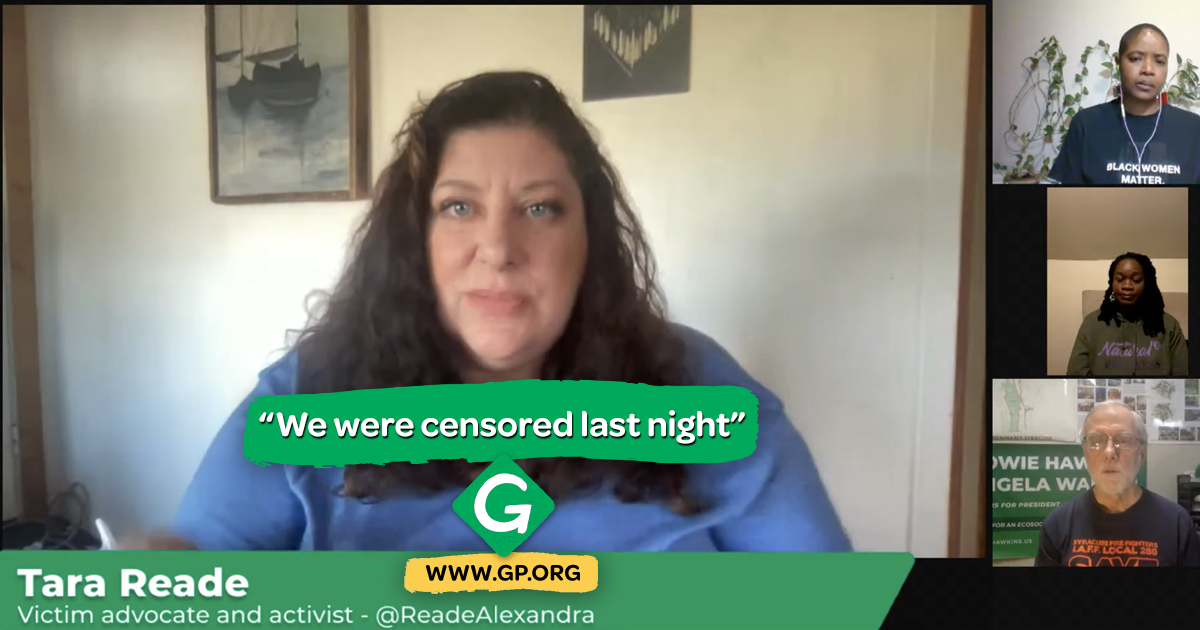 Back in September 2019, Howie Hawkins and Angela Walker released a statement titled, "Time for the Internet to be Controlled by the Public, not Corporate Interests." They said:

First Amendment protections including Freedom of the Press and Freedom of Speech should apply on the Internet, including on social media platforms. There needs to be enhanced protections on platforms for political speech to prevent the use of modern censorship, i.e. using search engines, algorithms and de-programing on platforms to suppress speech.

Well, on Tuesday evening, Howie and Angela had a very important conversation on the topic of Rape Culture, Patriarchy and Capitalism. Their guests were Annika Leonard, a Wisconsin-based advocate for victims of sexual assault, and T.R.

Why are we being coy about who the second guest was? Because every single social media post was "throttled," so that the posts were kept hidden from our followers on Facebook, YouTube and Twitter. Worse, during the live stream itself, we attempted to post a link to T.R.'s website into the chat stream with viewers, and the link was denied. It was stunning to see the censorship in real time.

You can watch the replay of the live stream here.

Big Tech is protecting their investment of millions of dollars in campaign contributions to Joe Biden. But Howie and Angela have been calling for social ownership of the internet and of services like Facebook and Twitter, which really have become more like public utilities.

We will continue our conversations on topics related to the women's movement, and on Tuesday, March 23 at 8 pm EST, we'll be discussing how the Equality Act impacts the lives of transgender women. You can subscribe to receive updates from our YouTube channel here.

Additionally, we have launched a podcast version of the Tuesday live streams, called Green Socialist Notes, and you can subscribe here. They're released every Thursday morning following the Tuesday video version. We hope the podcast makes it easier to stay up to date with the latest commentary from Howie and Angela.

P.S.: It takes resources to develop this type of programming. Please set up (or restart) a recurring donation of any amount by clicking here. Your donation helps us pay for the live stream and podcast app, graphic design and email blasts like this one. We'd like to start paying modest stipends to our contributors, too. If you already have a recurring donation in progress, we thank you for your support!