Hillary Clinton called me a 'Russian asset'. The establishment is losing its grip 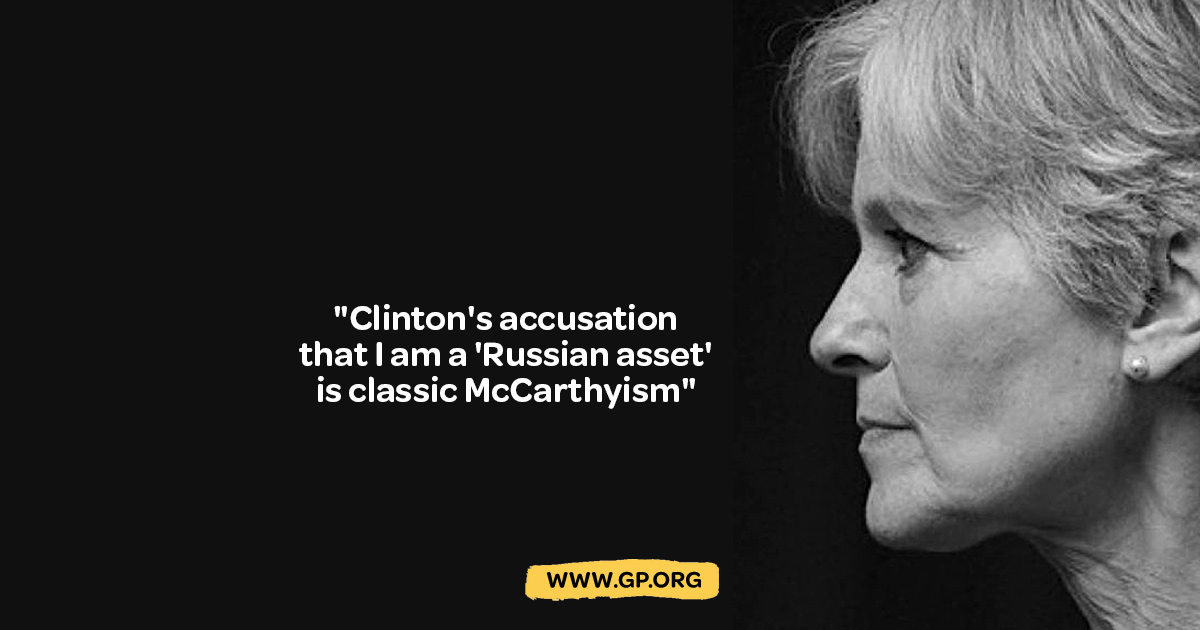 Like her attack on Tulsi Gabbard, Hillary Clinton’s accusation that I am a “Russian asset” is a ludicrous, unhinged conspiracy theory with no basis in fact. It’s also an attempt to deflect attention from the role of Clinton’s campaign in her own defeat. This desperate blame game is not an encouraging sign that the Democratic party will muster a winning strategy to oust the disastrous Trump administration in 2020. Equally alarming, the Clinton camp’s attempts to shift responsibility for their electoral failure to “Russian assets” has fueled a new era of McCarthyism - a toxic brew of warmongering, political repression and censorship now poisoning our public discourse.

By continuing to blame everyone else for their loss, the Clinton camp is suppressing serious reflection on the problems with their own campaign. These ranged from the “Pied Piper” strategy of urging media allies to elevate Donald Trump to front-runner status, to the sabotage of Bernie Sanders by Clinton surrogates in the DNC.

Confronting the real reasons for Clinton’s loss would open a much-needed conversation about why the Democratic establishment opposes progressive policies that are broadly popular - such as Medicare for All, a Green New Deal, free public higher education, and other programs to improve working people’s lives. They would have to reckon with the unpopularity of their disastrous foreign policy of global military domination. These discussions would threaten not only the mega-donors funding the Democratic party machine, but also the power of the Clinton-Obama neoliberals who made their careers serving those donors.

So instead the Clintonites blame their defeat on Russia and smear their opponents as “Russian assets”. This is classic McCarthyism, recalling a shameful period of paranoid hysteria and political repression.

Clinton’s smear builds on a relentless attack begun the week of the 2016 Green nominating convention. At that time, Democratic operatives and media allies began obsessively promoting pictures and videos from an international media conference I had attended in Russia in 2015, intentionally taking them out of context to claim I was there supporting Putin. In reality, the Moscow trip was part of an international tour to share my message of peace and climate action with media and government officials from many nations. The campaign to associate me with Putin escalated after the election, when media outlets and pundits who ignored our press releases and social media posts from December 2015 about the Moscow trip began circulating a single picture stripped of all context, implying that I was up to something secretive and nefarious in Russia. That picture, taken at the conference gala dinner when Vladimir Putin briefly sat at my table before giving a speech, has launched a thousand conspiracy theories.

Even the recount effort I initiated to investigate potential hacking or other problems in the 2016 election was accused of being a scheme funded by Russia to undermine faith in the election.

All these allegations have long since been debunked, by media outlets that actually looked into the accusations instead of simply repeating them, and by a Senate Intelligence Committee investigation that failed to turn up a single lead to explore.

Since then, the Green party and our campaign have been targeted by a barrage of disinformation arguing that Green voters, especially African-Americans, were duped by a Russian social media campaign. While the attempt by any nation to interfere in others’ elections is reprehensible, the much-hyped Russian troll farm was a relatively minor player on the social media battlefield: minimally-funded, with juvenile posts that were mostly unrelated to the election, and lacking tools like micro-targeting or data-mining used by sophisticated operations like Cambridge Analytica. Investigative journalists like Adrian Chen and Aaron Mate have raised the possibility that the troll farm was primarily a clickbait factory, rather than an electoral influence campaign. There’s no evidence these posts had any impact whatsoever in the 2016 election. The claim that people voted Green because they were tricked by a handful of such posts is an insult to voters’ intelligence.

In spite of the hype about Russian interference, polls consistently show this issue barely registers as a concern compared to the crises Americans face in their everyday lives. Meanwhile, 70% of voters are angry at the bipartisan status quo that’s thrown working people under the bus.

Hillary Clinton has every reason to worry about the establishment’s grip on power. Her desperate “Russian asset” smears will not hold back the rising tide of discontent. But they have lifted the veil on the disturbing US descent into McCarthyism. Let’s hope this will be a wake up call, triggering a much needed rethinking of the atmosphere of political repression that now threatens our democracy.