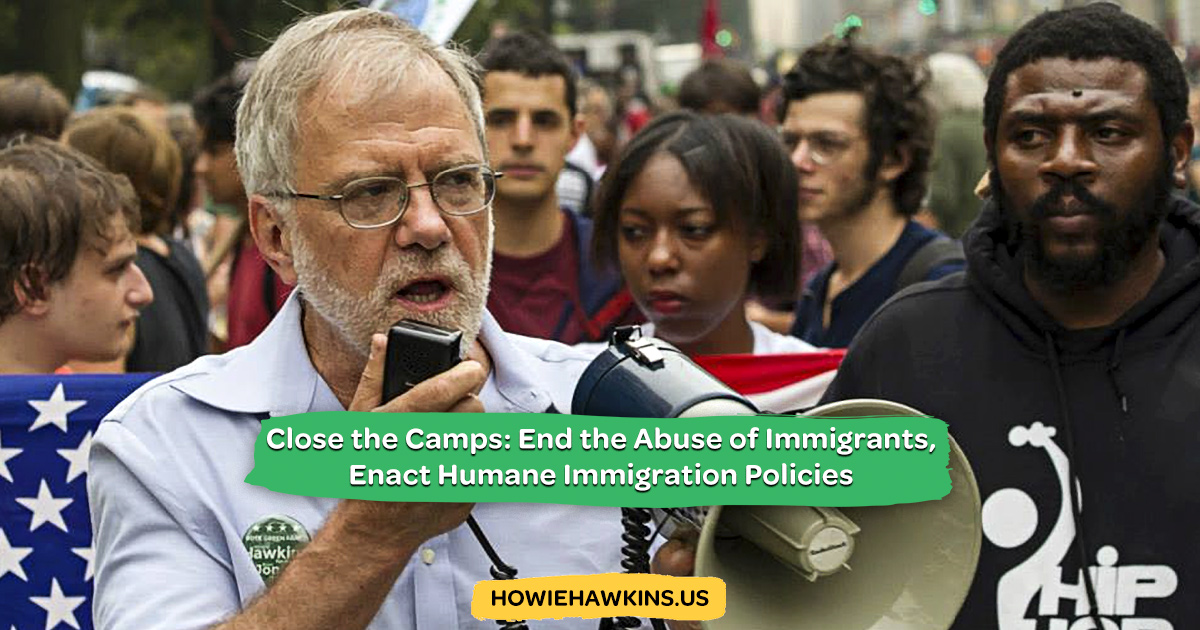 Update: U.S. Immigration and Customs Enforcement officials plan to launch nationwide raids and arrest thousands of undocumented immigrants as soon as this weekend. Reportedly, 2,000 immigrants who have been ordered deported by the federal government will be targeted. Agents will also reportedly arrest people who happen to be on the scene, even if they weren't the target of the raids. These so-called "collateral" deportations could include entire families. Officials said they will be held in detention centers together, where possible.

President Trump's immigration policies are reviled by many people from across the political spectrum. The images of small children held in migrant detention camps will go down in history as one of the worst cases of government-sponsored racial oppression in US history. His policies build on two decades of bipartisan anti-immigrant policies.

The Howie Hawkins 2020 campaign favors the immediate repeal of Trump's immigration executive orders, re-prioritizing of the Department of Justice budget so criminal prosecutions are minimized and repeal of laws that criminalize border crossings. We support modeling US border policy on the border policies within the European Union that allow people to cross borders easily as well as make trade between nations easier. Open borders will benefit the US and Latin American economies and will uphold the basic human right of freedom of movement. The campaign also opposes ongoing regime change operations by the United States in Latin America, as well as trade policies designed for corporate profits rather than the benefit of the working people of across borders. These imperialist intervention and corporate-managed trade policies are root causes of desperate mass migration.

THE HISTORY OF FAILED IMMIGRATION POLICY IS ROOTED IN RACISM

The policies of President Trump are built on two decades of bipartisan immigration policy that has been ineffective and has violated the basic human rights of people seeking to come to the United States. Indeed, the history of immigrant abuses has been supported by both corporate parties and has deep roots in the Democratic Party, both the Dixiecrat racist Democrats and the modern neoliberal Democrats.

The concept of the "illegal immigrant" comes from a law making it illegal to enter the United States. This law creating illegal immigrants at the border is nearly 100 years old. It made border crossings a criminal offense and made subsequent violations into felonies. The law was authored by a segregationist Democratic Senator, Coleman Blease of South Carolina, in 1929. Blease was a white supremacist who opposed the education of Black people, advocated lynching, and criticized First Lady Lou Hoover for inviting a Black guest to tea at the White House. When she did so, Blease said on the Senate floor that Hoover should remember it is the "White" House, and he then read the racist poem "N****** in the White House." Blease also sought to make marriage between people of different races a federal crime. The roots of today's immigration policies originated with racists like Blease.

Traditionally, criminal law enforcement had been in the purview of state and local governments. Blease's immigration criminalization escalated the growth of the federal criminal justice system, which has created mass incarceration and other problems beyond immigration. The law also resulted in the construction of three federal prisons along the US-Mexico border in the 1930s. Today's migrant detention camps come from these seeds of immigrant incarceration.

This law was made much worse by President Bill Clinton in 1996, and then by President Obama, who incarcerated more people of color than any other president in history as a result of immigration laws. Clinton, a southern corporate Democrat, made the racist immigration law worse when he signed the Anti-terrorism and Effective Death Penalty Act and the Illegal Immigration Reform and Immigrant Responsibility Act in 1996. Both of these laws increased the severity of immigration violations by expanding the list of crimes that could increase jail sentences. The laws also fast-tracked deportations and helped lay the foundation of mass deportation under presidents George W. Bush and Barack Obama.

The so-called compassionate conservative, George W. Bush, greatly expanded federal prosecutions for immigration violations. Bush escalated enforcement of Clinton's laws, resulting in the more than tripling of immigration prosecutions to 15,424 by 2003. In 2005 he incarcerated immigrants in federal jails in areas where detention bed space had run low. Even though illegal crossings declined significantly by 2008, half the federal criminal docket was for border crossings. The Bush administration made more than 70 agreements with local law enforcement allowing them to engage in immigration enforcement.

President Obama doubled the number of criminal immigration prosecutions in his two terms in office, despite the fact that illegal crossings plummeted by roughly half during his terms in office from 2009 to 2016. High numbers of border prosecutions remained true throughout Obama's presidency, leaving the first African-American president with the legacy of locking up more people of color on federal criminal charges than any other president in history. Immigration prosecutions topped 91,000 in 2013―28 times the number of such prosecutions in 1993. The Obama administration deported over 1.2 million people, the most of any president in US history, earning him the epithet "Deporter-in-Chief."

The biggest difference with the Trump administration is the open cruelty of Trump and other administration officials in justifying their "zero tolerance" and family separation policies. The separation of young children from their parents is government-sponsored child abuse. The inhumane conditions in the migrant detention camps are violations of international human rights laws. The migrants have their own names for the detention camps. The Border Patrol detention centers are called "iceboxes" by their shivering inhabitants. Other detention centers where people are backed into chain-link fence cages are called "dog kennels."

This week the extreme nature of US border enforcement was shown by the decision to re-prosecute Dr. Scott Warren for his humanitarian actions of providing migrants with water. A jury refused to convict him after the first trial now he will be facing, once again, two felony charges. We support Warren and oppose this prosecution.

Trump has built on the aggressive prosecution of immigration violations begun under Democrat Bill Clinton and greatly expanded under Democrat Barack Obama. Under Trump's "Zero Tolerance" policy, immigration prosecutions have risen to 57% of all federal criminal cases in 2018. Border prosecutions do not just occur at the border but throughout the country; felony illegal re-entry charges were filed in all but four of the 94 US district courts last year. Trump used the law as a basis for family separations at the border. Under Trump, when parents are prosecuted for the crime of illegal entry, federal officials send adults into the criminal immigration system and their children into the civil system. Previously, parents did not face criminal prosecution when they were traveling with their children. Arrests by ICE under the Trump administration in 2017 were about half what they were during Obama's peak years, 2010 and 2011, according to a new report by the Migration Policy Institute.

Immigration policy should be based on the human right of movement. Under Article 13 of the Universal Declaration of Human Rights, a person has "the right to leave any country, including his or her own, and to return to his or her country at any time." We support open borders, where movement between nations is free, as it is within the European Union.

International borders should be authentic fair-trade zones where people are free to travel across borders for work, shopping, visiting family and friends, and recreation. Economists recognize that easing border restrictions would double world GDP, as workers move to countries where they can be more productive. Research shows that allowing open migration would add $78 trillion to the world economy. US experience with immigration shows that open borders do not result in lost jobs or lower wages. Between 1882 and 1965 the US banned all Chinese immigration for various reasons, including racism, fear of job loss, and lower wages. In 1965, that policy was completely reversed, and none of those predictions have come true.

Open borders would reverse the use of borders and "illegal" immigration to increase labor exploitation. Historically, the US has encouraged "illegal" immigration when it needed labor and increased deportations in times of high unemployment. The border creates a reserve army of labor, like apartheid South Africa used its "pass laws" (which were an internal passport system designed to segregate the population) and Bantustan reservations, a territory set aside for black inhabitants of South Africa. By making labor "illegal" when it is allowed in, those workers are not able to organize for fear of deportation. They become a super-exploited class of workers, which undermines wages for all workers.

An immediate action that needs to be taken is to repeal the Trump administration's executive orders on immigration. Howie Hawkins 2020 agrees with 240 immigrant and civil rights groups who wrote the House leadership this June 19, urging:

We recognize that the migration of desperate people from Central America is in large part due to US economic exploitation and regime change interventions that put in place governments that violently suppress democratic rights and labor and environmental organizing in order to enhance the profits of capitalists. The United States also pressures nations to accept corporate-managed trade agreements designed primarily to benefit US global corporations. These root causes of migration must also be addressed by ending imperialist interventions and supporting popular movements for democracy, peace, labor, and the environment.

We join social movements who plan to resist the mass arrests of immigrants promised by President Trump to begin "sometime after July 4th." Standing together against Trump and demonstrating community support for immigrants undermines the terrorism Trump is inflicting on immigrant communities. Limiting the damage done by the Trump administration is just the first step. We must reverse the bipartisan policies of the last two decades. We need a positive and humane immigration policy that allows people to cross borders, which is their human right.