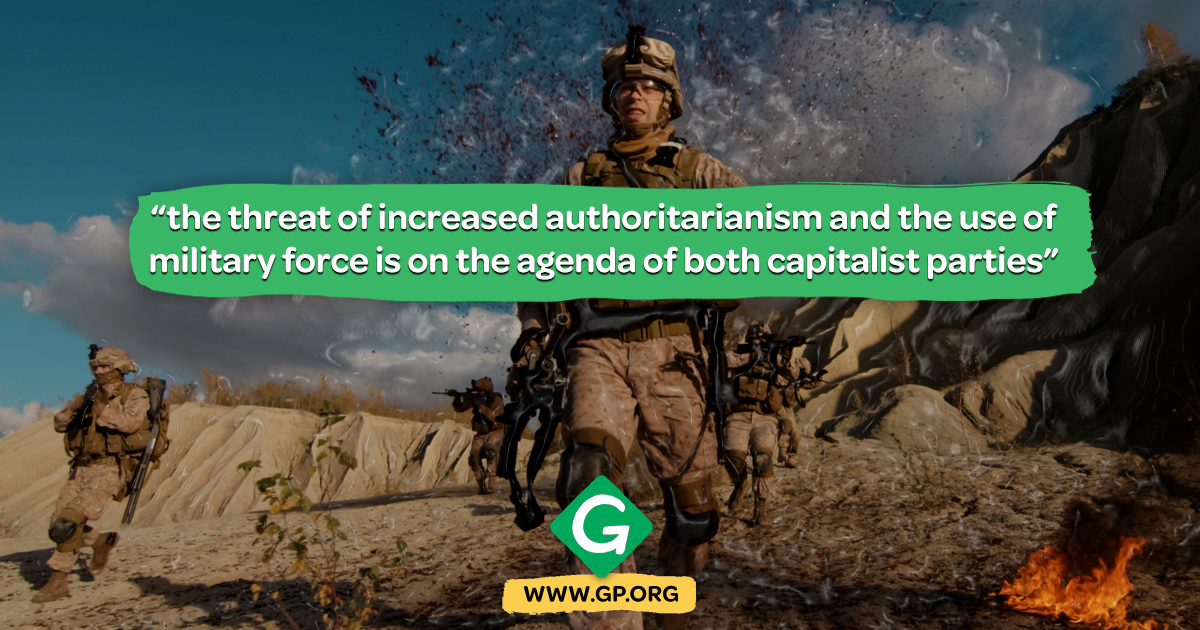 No matter who sits in the white peoples' house, we will have to continue to fight for social justice, democracy, and People(s)-Centered Human Rights.

Chaos, violence, legal challenges, voter suppression and party suppression all culminated in the pathetic display of democratic degeneration on Election Day. After two decades of losing wars, plus the economic collapse of 2008, the response to COVID-19, and now the election debacle, if there were any doubts the U.S. is a morally exhausted empire in irreversible decline, they would have been erased with yesterday's anti-democratic spectacle.

Democratic Party propagandists and "frightened" leftists are desperate. They tell their supporters and the public that the republic will not survive another term of Donald Trump. They point to his despicable, racist descriptions of undocumented migrant workers from Mexico; his characterization of some global South nations; his misogyny; his crude and obvious white supremacy; his authoritarian proclivities; and his pathological dishonesty—among his many character flaws—as reasons why he must be stopped.

However, for those of us who have been historically subjected to the colonial fascism that is the U.S. settler project, the liberal-left argument that the Trump regime represents some fundamental departure from previous administrations that were equally committed to white power and that he is an existential threat (to whom, we are not clear) remains unpersuasive.

As the Biden and Trump drama plays out, we ask from our experiences some simple questions on what might happen when a victor emerges:

What is this "new fascism" the latte-left talks about? What is this "existential threat"? For most of us, the threat has always been existential. When colonial Nazism that was inspired by the U.S. Jim Crow South was applied in Europe—with its violence and racism—it was only then that it took on a different moral and political characterization.

The racist French government launches a domestic terror campaign against Muslims in the country, while bombing Africans in Africa and overthrowing their governments. The European Union gives a human rights award to a political opposition in Venezuela that burns Black people alive because those Black people are seen as Maduro supporters. Meanwhile, NATO, the military wing of U.S. and European white supremacy, expands into South America to support the Monroe Doctrine that morally justifies U.S. regional domination. But fascism is coming to the U.S., they cry!

For those of us who reside in the colonized spaces of empire, leading with uncritical emotionalism as we confront and attempt to deal with the Trump phenomenon, is a self-indulgent diversion we cannot afford. That is because, for us, the consequences truly are life threatening.

In occupied Palestine, Venezuela, Yemen, the South-side of Chicago, Haiti, the concentration camps for Indigenous peoples called "reservations," as well as "Cancer Alley" in Louisiana, our survival depends on seeing this violent, barbarian behemoth for what it is. We must have no sentimental delusions about the difference between the governance of either of the two ruling class-dominated parties.

For us, both parties are ongoing criminal enterprises that are committed to one thing and one thing only: Ultimately serving the interests of the capitalist ruling class—by any means necessary!

It is in that commitment that we, the colonized, the excluded, the killable, who experience the murderous sanctions that deny us food and life preserving medicines, the killer cops who slowly snuff out our lives with their knee on our necks, the deadly military attacks that destroy our ancient nations and turn us into refugees, the subversion of our political systems, the theft of our precious resources, and the literal draining of the value of our lives through the super-exploitation of our labor.

For us, we ask, what will be the difference if Biden wins? Wasn't Biden part of the administration that conspired with the Department of Homeland Security and Democratic mayors to repress the Occupy movement once it became clear the movement could not be co-opted?

Didn't Obama place Assata Shakur as the first woman on the FBI's "Most Wanted Terrorists" list and increase the bounty on her head? A recent release of FBI documents revealed it was during the Obama-Biden years that the "Black Identity Extremist" label was created.

The illegal subversion of Venezuela began with Bush, but intensified under Obama. The sanctions slapped on that country—that were expanded under Trump—have resulted in tens of thousands of innocent people dying from lack of medicines. It was the Obama-Biden administration that decided to devote over $1 trillion to upgrade the U.S. nuclear arsenal over the next decade.

Democratic and Republican strategists support the white supremacist NATO structure, the "Pivot to Asia," and the insane theory being advanced by military strategists, who are wargaming a nuclear "first-strike" strategy against Russia and China that they believe can be successful in destroying those countries' intercontinental ballistic missiles while the missiles are still in their launchers. That is why the Trump administration pulled out of the Intermediate-Range Nuclear Forces Treaty and has so far failed to renew the START nuclear treaty with Russia, scheduled to end in February 2021.

Not being confused by the liberal framework that advances a cartoonish understanding of fascism that Trump's bombastic theatrics evokes in the public imagination, it is clear the threat of increased authoritarianism, the use of military force, repression, subversion, illegal sanctions, theft, and rogue state gangsterism is on the agenda of both capitalist parties in the U.S. and the Western European colonizer states.

No matter who sits in the white peoples' house after the election, we will have to continue to fight for social justice, democracy, and People(s)-Centered Human Rights.

It is important to re-state that last sentence because the left in the U.S. is experiencing extreme anxiety with the events around the election. They want and need to have order, stability and good feelings about their nation again. But for those of us from the colonized zones of non-being, anything that creates psychological chaos, disorder, delegitimization, disruption of the settler-colonial state and demoralization of its supporters is of no concern for us.

Unlike the house slave who will fight harder than the Massa to put out the flames in the plantation house, we call to the ancestors to send a strong breeze.

Ajamu Baraka is the national organizer of the Black Alliance for Peace and was the 2016 candidate for vice president on the Green Party ticket. Baraka serves on the Executive Committee of the U.S. Peace Council and leadership body of the United National Anti-War Coalition (UNAC). He is an editor and contributing columnist for the Black Agenda Report and contributing columnist for Counterpunch. He was recently awarded the US Peace Memorial 2019 Peace Prize and the Serena Shim award for uncompromised integrity in journalism.