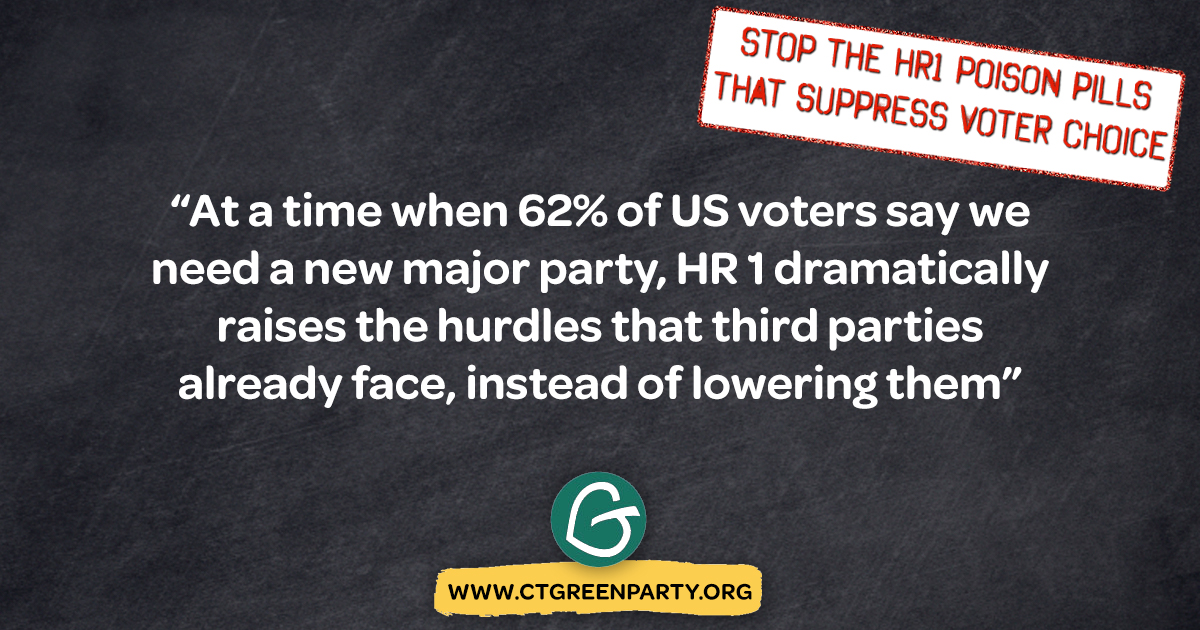 HARTFORD CT – An otherwise progressive proposal that would enhance voting rights for many Americans is being used in a stealth attack by the Democratic Party to suppress third parties and to entrench the power of rich people in choosing who Americans can vote for. The Green Party of Connecticut supports many of the important reforms in HR 1, the so-called “For the People Act,” but calls on Democrats to amend the bill to truly do what it says – protect democracy.

Justin Paglino, the Green Party’s 2020 candidate in Connecticut’s third congressional district, said of H.R. 1, “Reforms in this bill that empower voters are welcome, including early voting, public disclosure requirements for donors to corporate Super PACs, and a plan to end partisan gerrymandering. But hidden in HR 1 are measures whose clear purpose is to strengthen establishment power and weaken voices of dissent. HR 1 skyrockets the amount of money that party leadership can give to a candidate from $5 thousand to $100 million – and that is not a typo! Even worse, at a time when 62% of US voters say we need a new major party, HR 1 dramatically raises the hurdles that third parties already face, instead of lowering them. HR 1 quintuples the donation threshold candidates must meet to earn matching funds, and eliminates the 5%-of-the-vote threshold for federal grants, a provision that has long been the light at the end of the tunnel for third party candidates.”

Paglino, who recently announced his intent to run for Congress again in 2022, added “Connecticut’s third congressional district shows exactly what’s wrong with our election laws. The two party system has given us a thirty year incumbent Democrat who refuses to support widely popular policies such as Medicare for All or a Carbon Tax, and Republican challengers whose only prerequisite qualification is that they have large sums of money to run their campaigns.”