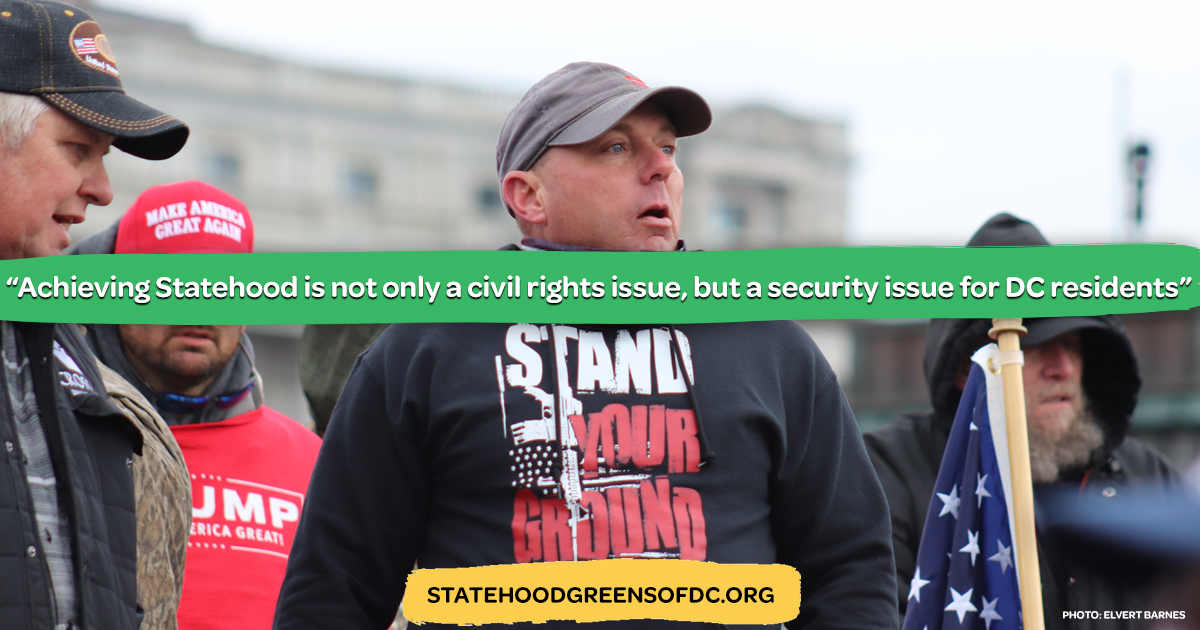 WASHINTGON – On January 6, 2021, on the same day that much of the country was celebrating the results of the Georgia Senate runoff elections, the US Capitol Building was overrun by a mob of supporters of Donald Trump. The intent of the actions of this mob was to stop the certification of electoral college votes, the very act of which was occurring in the Senate at the time of the breach of the Capitol. We, the DC Statehood Green Party, condemn those who took part in this insurrection, putting not only innocent Capitol Hill staffers at risk, but the entire community in Washington, DC.

The hypocrisy of the moral outrage from the bipartisan political establishment is not lost on us. For decades, the United States government has dedicated countless resources to the destabilization, delegitimization, and outright overthrow of many governments around the world. Those same resources, in the form of billions of dollars in taxpayer money, could be used instead for healthcare, social services, climate security, environmental protection, education, election integrity, infrastructure, and many other programs that could help people all around the country. The events of January 6th, 2021 are a perfect example of the United States being introduced to the crumbling world it helped foster. In other words “the chickens came home to roost”.

That said, the events of January , 2021 did not happen in a vacuum. On the weekend of November 14, 2020 a large group of Trump supporters travelled to DC for a demonstration, which led to scuffles with antifascist counter protesters and violence being committed against black, LGBTQ, and members of the homeless community in DC. Similar actions took place the following month when another large group of Trump supporters descended upon DC. During these actions, the DC police department showed an unwillingness to police the violence being committed by Trump supporters with the same intensity they previously deployed on black protesters demonstrating for racial justice.

These events also happened in the context of the continuing fight for DC Statehood. On the same day where many in DC were contemplating ways in which to further our collective struggle for Statehood, we were once again shown why achieving Statehood is not only a civil rights issue, but a security issue for DC residents. When it came time to protect and defend our city from an insurrection, our elected leaders did not have all the tools at their disposal to do so, and had to wait for an uncooperative President to be forced into sending the DC National Guard to assist during the siege.

It is ironic that several Senators who supported certification of Biden/Harris’ victory in the Electoral College were appealing to state’s rights with respect to reporting their election results. These same calls for state’s rights are coming from the very Republicans who, when discussing the prospects of DC Statehood, have employed every racist dog whistle in the book to dehumanize the residents of Washington, Douglass Commonwealth. With that, we affirm our recognition of the electoral college system as a bastion of white supremacy, and acknowledge the still existing efforts to suppress black voters all over the country, particularly in Georgia, despite the celebrated gains in the media.

We urge the following action:

In conclusion, we would also like to make crystal clear our opposition to any overreaction and instinct on the part of the government at the federal, state, or municipal level to further militarize the streets of Washington, DC in response to the events of January 6th. While we acknowledge the fear that was struck in many that day, we urge our constituents to think about the bigger picture, and oppose any further militarization of the DC Police, Park Police, Capitol Police, and all Police forces that occupy the streets of our communities. We urge our constituents to oppose any further increase of surveillance against our communities as a response to the siege of the Capitol. We should not allow any increased militarization of the state apparatus, which in the wrong hands serves as an apparatus of oppression. We, the DC Statehood Green Party, instead continue to advocate for community investment and a defunding of the police forces that allowed our communities to be trampled by white supremacists. We must rethink safety for our communities in the wake of this event, as opposed to giving the forces who helped enable the events a bigger hammer.

“Those who supported Trump and wanted to disregard the states' votes while crying out for states' rights express a contradictory agenda as they switch their arguments only to suit their narrow agenda and a skewed vision of justice and equity in America. We do not fall for such hypocrisy and demand that true patriots and faith leaders with integrity call out this bigotry which is antithetical to the America we have yet to achieve.

America cannot call itself the greatest Democracy in the world or the “leader of the free world” while DC, Puetro Rico, and other so called “territories” remain owned and remotely governed by American imperialism, while the US continues to ravage African resources, and sits idly by as the other European, Chinese, and various other peripheral powers exploit and pillage smaller nations around the world. This while America has yet to recon with its own genocidal history, in particular the slaughter and extermination of indigenous tribes and the seizing of their land.

This is not simply about right or wrong, freedom of speech, or any individual presidency. This is about the integrity and soul of America and her people. This is about a reckoning and righting of systemic wrongs that have led to the subjugation of women, youth, children, black people, immigrants, LGBTQ/SGL people, poor people, rural people, urban centers, formerly incarcerated (and the pipeline to prison industrial complex), neurodivergent people, people with addictions, veterans, and people with chronic illnesses often fueled by healthcare disparities, inadequate education, substandard housing, and food inequities.

Those blankets that cover the myths about the “greatest nation on Earth” and “the great American dream” have been summarily ripped off so the whole world can see our shame. What will we do next? Will we administer the right version of justice, and recreate our cultural norm to be of equity and fairness? Will we change our propaganda and narrative that has allowed white supremacy and patriarchy supported by unchecked Capitalism to continue to reign free while people suffer? It is now, in this time, that WE must rise and demand change that all Americans deserve! It is possible to have a better future together. Otherwise, we are doomed to suffer strife and injustice forever as a divided nation.”