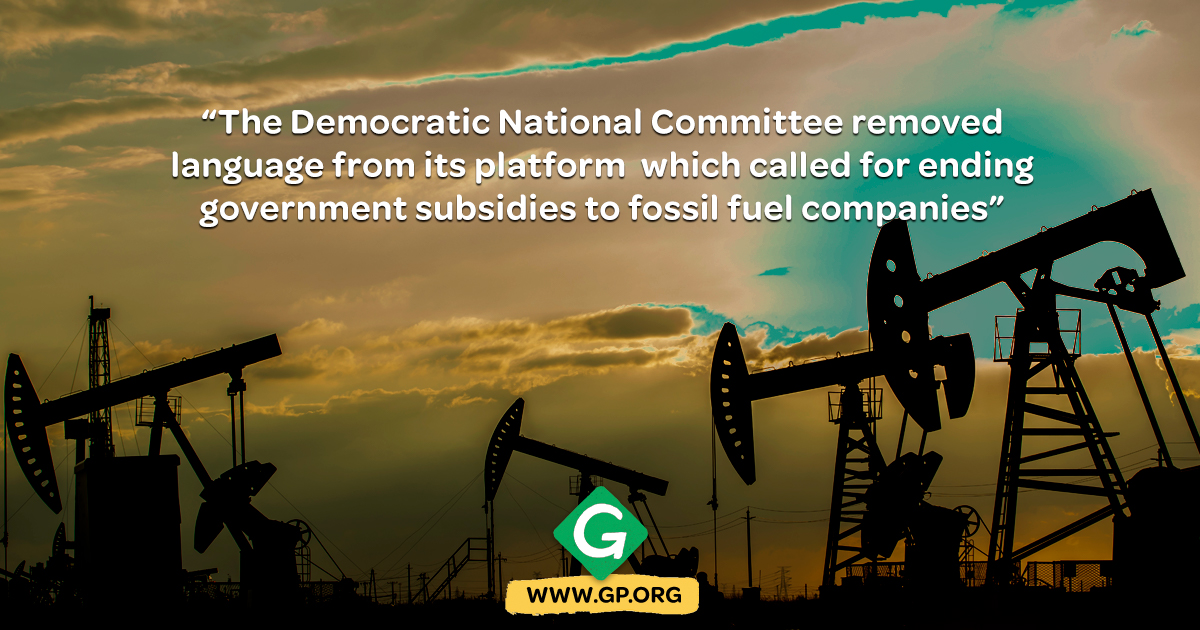 The Republicans lie about the harm they do to the planet, and the Democrats lie and pretend they're not doing the very same things.

In recent weeks a combination of drought and record breaking heat have accelerated wildfire season to historic levels of devastation. More than 4.6 million acres have burned in the states of California, Oregon and Washington. Skies are colored orange and red, the air is unbreathable, lives have been lost and entire towns have been destroyed.

The connection between heat waves, droughts, and human made climate change are clear and the solution is known to every school child. There must be a drastic reduction in the production of fossil fuels. A radical restructuring of society, especially an end to capitalist incentives for planetary destruction, is no longer optional. Every form of plant and animal life is in very grave danger.

It is easy to blame Donald Trump, who among other things famously withdrew from the 2015 Paris climate accords. Although it must be pointed out that the agreement is an honor system based declaration of intent and not a requirement to take action. Signatory nations chose goals for themselves while also allowing temperature increases that are deadly for people living in the global south. The agreement specifically states that industrialized nations don't have to pay compensation for the damage they do to the rest of the world. Trump's stunt gives the impression that Democrats are serious about fighting climate change but the facts prove otherwise.

"There must be an end to capitalist incentives for planetary destruction."

Barack Obama recently took to twitter with photos of orange California skies and implored voters to act. "Protecting our planet is on the ballot. Vote like your life depends on it -- because it does." He didn't say who voters should support. One assumes he meant the Democrats, but they have turned their backs on their own timid, mealy mouthed proclamations of concern.

The Democratic National Committee (DNC) removed language from its platform which called for ending government subsidies to fossil fuel companies. That betrayal was just as well, because the Democrats' record on the environment is nothing like the image they project on social media. Obama was joined by California's Democratic governor Gavin Newsom who used some of the same photos and offered the same platitudes with capital letters for extra emphasis. "Climate change is REAL. So please VOTE."

"The Democrats' record on the environment is nothing like the image they project on social media."

Obama and Newsom are both liars. This is what Obama said in a March 22, 2012 speech . "Now, under my administration, America is producing more oil today than at any time in the last eight years. That's important to know. Over the last three years, I've directed my administration to open up millions of acres for gas and oil exploration across 23 different states. We're opening up more than 75 percent of our potential oil resources offshore. We've quadrupled the number of operating rigs to a record high. We've added enough new oil and gas pipeline to encircle the Earth and then some."

Newsom is no better. Despite the social media rhetoric his administration continues to give fracking and other drilling permits. In fact, the state of California has given more fracking permits in the first six months of 2020 than it did in the same period the year before.

Neither of the two capitalist parties is in any position to stop the planet from heating up. That is because both do the bidding of the corporations causing the record breaking temperatures to occur. One party lies about the damage it is causing and promotes easily dismissed quackery to defend itself. As usual, the Democrats sneer and pretend to act differently when at every opportunity they do the very same things that are killing the planet.

"Both parties do the bidding of the corporations."

Our lives do depend on bringing about change but that won't happen if Biden is the man in the White House. Supposedly progressive Democrats stole the language of the Green Party, the party they otherwise scorn, and claim they will institute a Green New Deal. But the Democrats who promote a watered down version are openly thwarted by their leadership. Their progressive wing is not serious and the establishment doesn't even pretend until the west coast is ablaze and then pretense is all they have.

Climate change did not begin after Donald Trump was inaugurated. The damage was done by Democrats and Republicans, by the United States and by every industrialized nation that bowed to the dictates of capital. Obama and Newsom and all the rest hope we aren't paying attention when their handiwork produces a natural disaster. Pretending that one wing of the duopoly will behave differently than it has in the past is adding insult to one's own injury. The least we can do is call out the scoundrels when they tell us lies as the sky turns red.