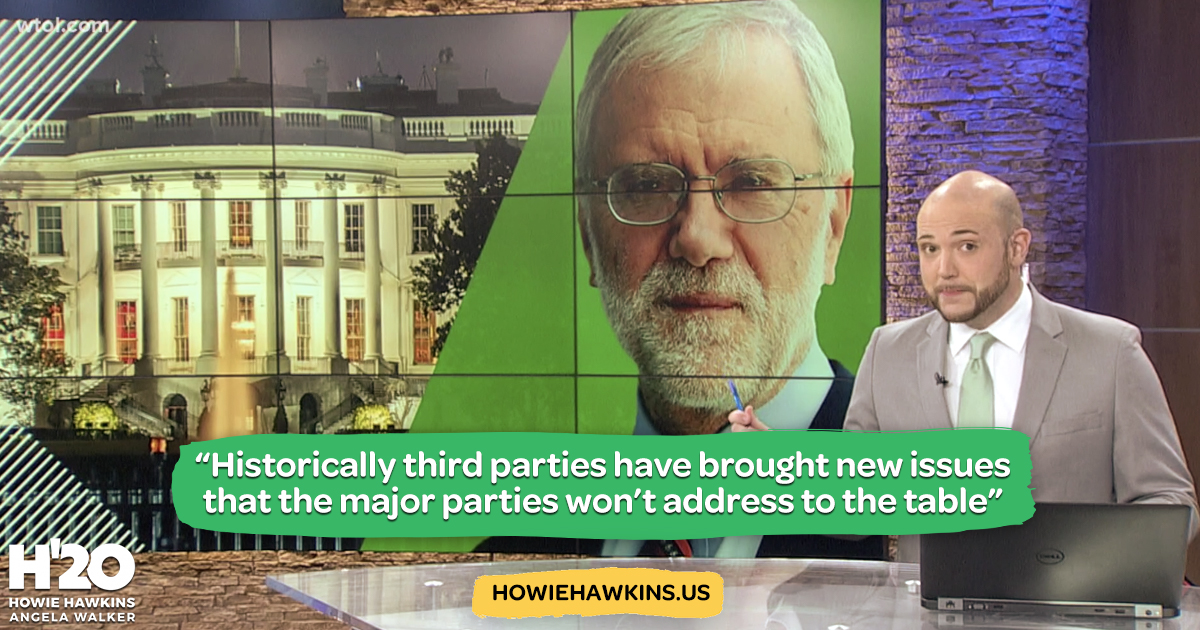 TOLEDO, Oh — Third parties have a long history in the United States. The Republican Party itself was a third party behind the Democrats and the Whigs in the 1800s. And with so many people taking issue with both of the modern major parties, third parties like the Libertarians and Green party have seen a surge of interest in the last decade.

On Saturday, Libertarian candidate for president, Jo Jorgensen, was in Toledo speaking to and taking questions from a crowd of about one hundred people. On Sunday, WTOL 11 spoke with Green Party presidential candidate Howie Hawkins.

The 67-year-old, Green Party co-founder is on the ballot in 30 states, including in Ohio, Florida, and North Carolina where the presidential race is in a dead heat between President Donald Trump and Joe Biden.

Hawkins says the policies in his party's platform such as the Green New Deal, Medicare for All and an end to U.S. involvement in overseas conflicts aren't the focus of Republicans or Democrats even though they enjoy broad support from the American people.

"That's why you have third parties, historically they have brought new issues that the major parties wont address to the table. And in time many of those policies have been adopted," said Hawkins.

Hawkins says there are three "life or death" issues that the other parties aren't adequately addressing; the climate crises, inequality, and nuclear arms reduction.

Front and center in his fight is the Green New Deal.

It's an environmental action plan, proposed by the Green Party, that's been taken up by progressive members of Congress like Sen Bernie Sanders and Alexandria Ocasio-Cruz.

The retired union worker says the Green New Deal will get the U.S. to 100% clean energy and negative greenhouse gas emissions within ten years.

He says the life expectancy of people in the working class has gone down as a result of decades of stagnant wages.

The plan is designed to end poverty and economic insecurity by acknowledging people's right to a job with a living wage.

Hawkins also wants to shed light on military spending and removing troops from what he calls America's "endless wars," like the war in Afghanistan that's still on-going decades after it started.

As President, Hawkins says he will negotiate a complete and mutual nuclear disarmament with the world's other nuclear powers.

"But hardly anybody in this country knows about that because the two major parties are committed to deploying new strategic and tactical nuclear weapons, which has destabilized the nuclear arms situation," said Hawkins.

The Green Party also says the creation of jobs, and racial inequality are vitally important right now as well as turning around what he refers to as the country's failed response to the COVID-19 crisis.