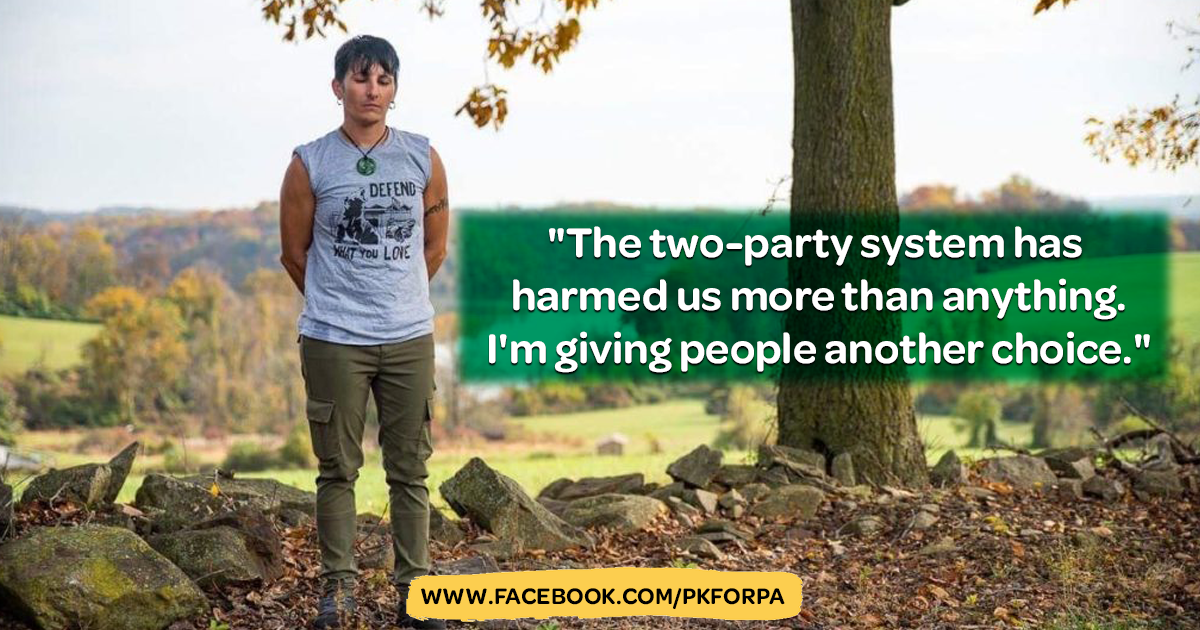 Neighbor to Marsh Creek State Park, she has been actively opposing the Mariner East pipeline, fracking for plastics and the petrochemical infrastructure. She said she has many similar beliefs to most members of the Green Party and is endorsed by the Pennsylvania Green Party.

"The two-party system has harmed us more than anything," She said. "I'm giving people another choice."

DiGiulio was recently arrested for stopping Mariner East pipeline construction late at night near her beloved Marsh Creek. She said she was found not guilty of disorderly conduct by a judge for taking direct action to stop the pipeline construction, which the judge determined "caused less harm than what she was trying to prevent" and denied the prosecutor's claim that she was not in imminent danger.She joins a crowded field seeking to replace Democratic Gov. Tom Wolf, who is limited to two four-year terms.

"I'm running in order to push the bar where it needs to go," DiGiulio said. "The Democrats aren't progressive; they are fighting a party who call themselves conservatives, yet are actually regressive in their policies. What happens with that dynamic is we end up getting pulled further and further to the right."

DiGiulio also said that too many Dems are "stuck fighting" for the status quo.

"What we need are actual progressives, and not a group who call themselves progressives as they are standing in quicksand," the candidate said. "The progress we need will require a hard push to the left."

When asked what her chances are of winning the race, DiGiulio said that it depends on what one views as winning.

"For me, winning is bringing new thoughts and ideas into the political conversation," she said.

So, what are those issues she might address if elected?

"Health care is a human right," she said.

"Mothers are struggling. They carry the weight of our future and should be elevated and supported. Women are treated as political targets and this abuse needs to stop.

"A women's right to abortion is a matter of their access to health care, not some hot button issue as it is used by politicians. We must take care of our mothers and that includes Mother Earth!"

The candidate said that climate change is huge. She noted that there would not be a war like the Ukrainian War if we had already transitioned away from fossil fuels.

"At this point, we have no time to waste," she said. "We are in a climate emergency and the current geopolitical crisis is merely a symptom of the crisis."

As a chemist and research scientist, DiGiulio wants to see employees transition from working in the fossil fuels industry and into the renewable energy field.

"We need to look at the mistakes we've made," DiGiulio said. "The politicians are not scientifically educated.

"I'm just trying to be responsible and an accountable scientist."

She is also very concerned with the waste generated by fracking.

"With a transition away from fossil fuels, we need to consider the entire process from cradle to grave, for everything from toxicity, to workforce, to the cost of cleanup," she said.

"We need to make sure our foundation is strong," she said. "If not, it will fall down.

"Localism helps people to slow down and focus on their local community. We are fragile because we don't have a strong foundation."

The candidate also favors redirecting funds from war and over-policing to preventative measures to alleviate poverty and address mental and behavioral health issues.

"We need to start from the basic needs — again from cradle to grave — we as a society need to assure that we are taking care of one another," she said. "Every person should have general health care that includes mental health coverage, dental coverage, and women's health care needs.

"Providing health care for all allows us to be our strongest selves as a society, and we are only as strong as our weakest link."

"PK" needs your help to get on the General Election ballot. Please reach out to your county Green Party or email [email protected].s